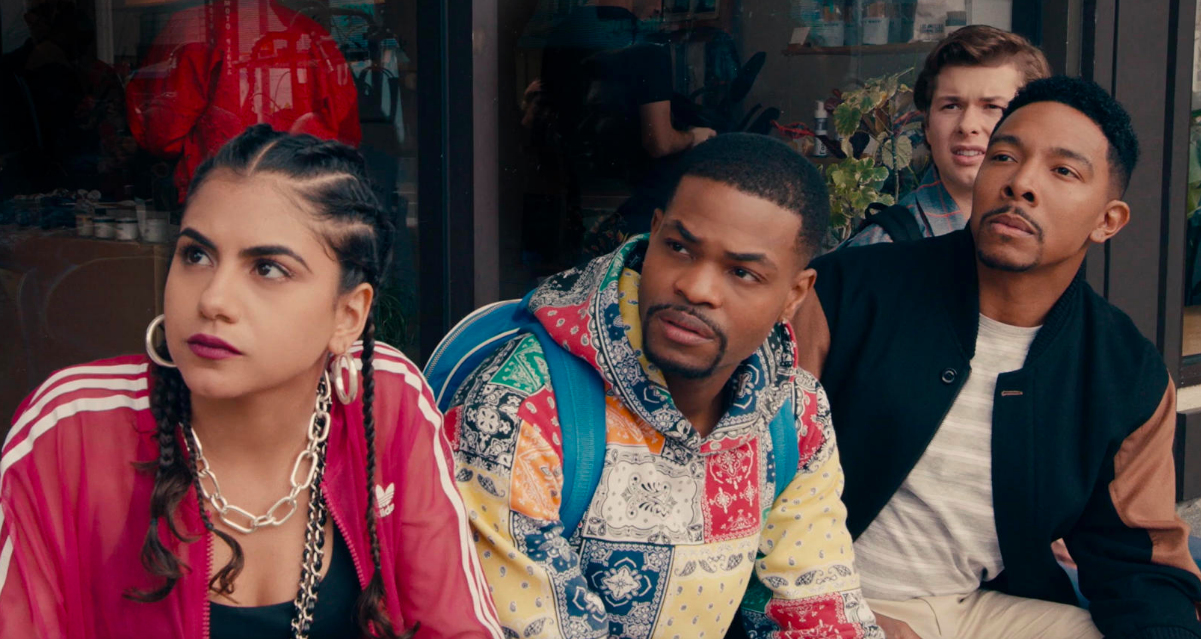 The guys have made it back to LA. Devin wants to get back to his wife, but the exchange won’t happen for another hour. Bobby wants to show Nori and Stuey the shoes while they wait. Jason Statham seems to text Bobby like they’re friends.

Stuey asks the question: “How did Jason Statham get them out?” According to Devin and Bobby, the lights went out and bags were pulled over their heads then some minutes later they found themselves at a karaoke bar. Jason was singing shirtless. Then they took a ride to a helicopter, to a 747 that was ready to take them stateside. Cole happens upon the group and asks to hold the shoes, then accidentally spills a green smoothie on them. Since it is his fault, he takes the group to see Jason Markk to assist fixing them. Jason doesn’t make any promises but will try. Lil’ Rel shows up and notices the Zeros. He wants to buy them for ten grand, even damaged.

Devin is ready to sell but Bobby refuses. Devin thinks the cash is a good idea and doubts that Jason can fix them, while Bobby doesn’t want to break even and wants to go for his dream, their store. Devin decides not to go for the cash. Jason is able to fix the pair, but when they go back to look at them, the shoes are gone. Stuey notices Cole is gone, and Nori gets on Instagram to find him live. They all run after him on the street. Stuey stops, out of breath, and urges them to go. He looks up to find a pair of Retro Jordan 1s sitting in a store window. He takes a chance.

Devin and Bobby are still on the run. Nori is right behind them watching Cole’s live. The boy is a huge jerk about it. Devin tackles Cole and holds him back from punching the guy, who claims he was just playing. Luckily, Devin finds the shoes are just fine. Stuey catches up to Nori with the shoes. Obviously, she is happy and in tears. She gives him a couple kisses and a hug.

The full squad make their way to the deal. Just outside the door of their trade, Bobby receives a dick pic from Jason Statham and doesn’t know how to respond. A good small laugh. At the door, the guy who made the video of wanting the Zeros and exchanging his collection for them claims that he doesn’t care about the pair of shoes. He won’t exchange his collection and has five pairs. Actually, Lil Rel bought a pair for them.

Outside, Bobby wants to keep going for his app Sole Mates, but Bobby knows that he has put too much on the line for all this. He leaves the guys in an Uber. Bobby walks away from Stuey and Nori. On his way home, Devin asks the driver to pull over so he can buy a small bouquet of flowers, but while he is out, the driver goes into Shoe City to shop. Devin ends up waiting for the driver and sees an employee with a pair of fours — the shoes that Devin wanted in the beginning of the series. The employee has four in the back of his trunk though.

Nori leaves Stuey in town, with him hoping that there would be more. Nori teases him and says she will text him. I am rooting for them. Devin gets the shoes and makes it to his house. He rings the bell and arrives with the fours on his shoes. Christine isn’t happy to see them on his feet. Devin apologizes for everything, promises to go back to work, and states that the shoes are way more than what she thinks. They are the shoes he wore when he scored 22 points in a game in high school, wore to prom, and the shoes he was wearing when he fell in love with Christine. That really thaws her out. How could it not? It was sweet.

Christine asks what else she should know. Devin almost ruins the mood by explaining he got arrested in Hong Kong with Bobby. However, he explains to Christine that he misses his best friend. Christine concedes and lets Devin in, then surprises him with the “nod.” Devin appreciates it. Christine surprises him again with an invitation to dinner for Bobby. While Devin jokes about inviting Christine’s mother, too, he happens upon the handbag that I swore she left and didn’t buy in the episode before. She says it’s a purse but I bet Devin knows.

Bobby is back at shoe school, designing. Good for him.

I was pleasantly surprised by the how much I enjoyed the show. Having an ultimate search for the perfect pair of sneakers looks like a good time. If anything, it may just have given tourists spots to check out for great kicks. The pairing of Allen Maldonado and Andrew Bachelor was really good and I loved the drop of celebrities such as Lil Rel, Hasan Minhaj, and Jason Markk. I’m interested in what will happen next.