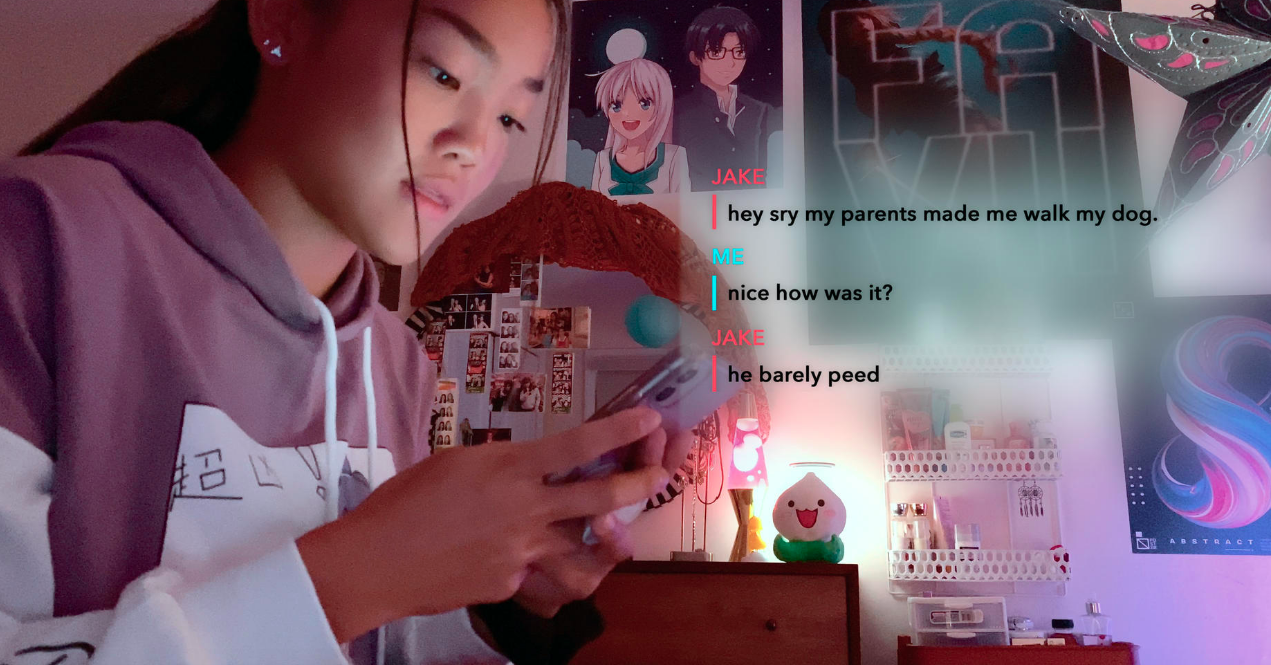 May 27, 2020: The world of video games is fun when you can be on a group call with friends and a crush, who all are streaming Overwatch co-op. Mia (Kylie Liya Page) shows off her skills as she plays and possibly gets her crush’s attention. After they finish, she gets a call from her friend Riley, hits her up on Discord to point out that her crush, Jake (David Iacono), is single and simping for her. Riley points out that Mia learned to be a supporting character on a game so that she and Riley could join Jake’s group to play with them.  Man, that is a hard crush. Even I am shipping them. Despite all this, Mia doesn’t think it to be true. She thinks that Jake is only into white girls.

Riley suggests that Mia try a TikTok dance to get his attention. Mia at first does not want to do it but decides to stalk Jake’s social to find out what he likes. The safest choice for Mia is to upload a video of Jake’s favorite: Messi. After a quick call from her mom (fluent Mandarin is spoken) checking on her and the progress of her homework, Mia receives a message from Jake. Like any good girl, she calls up Riley for help on what to do now that she has gotten Jake’s attention. Google is the best way to assist with lying to a boy about shared personal interests. This is not going to end well in my opinion.

Jake thinks Mia is cool and asks for her Snap. She hangs up on Riley immediately when she gets a message from him. He shows off his Messi drip. They have a good conversation going about how parents worry about the effects of the pandemic and how good Mia’s game has gotten when Jake suddenly stops messaging. A notification pops up that Jake added to his story. It’s a picture of him and a girl Kennedy back when they were kids to currently. Riley checks in on the relationship progress. The two go through Kennedy’s social which depresses Mia. Riley, being a good friend, reminds Mia that she is beautiful and just needs to remind Jake what he is missing out on. She gives Mia advice on the best way to take a photo.

Mia takes a selfie but goes through the process of editing the pic to the point of looking like an alien to me. Luckily, Jake hits her up with a decent explanation. He brings up VR chat and Mia brings up that she builds a campsite on hers. He asks to come by and see it. Riley is called in for assistance again. We must find the perfect avatar for this VR meet up. Riley thinks that the avatar that looks like Mia is probably best. Thankfully, Mia listens. Once Jake friends her, she takes him to her campsite. He brought a laser shooting cat because he knows she likes cats. That is too cute. She shows him the work she has done on the campsite during quarantine. This VR chat is a beautiful way to get away from things. Jake finds out that Mia has never been camping and suggests that they go sometime when they can.

Jake asks to take a picture of the two of them in this world. Riley messages Mia to remind her to tell Jake how she feels. Mia finally tells him how she feels, which he states was what he was going to tell her. The only reason why he is still playing Overwatch is because she’s on there. They share a cute moment, which is interrupted by Mia’s mom’s arrival. She closes the laptop despite Mia’s insistence not to.

The next day, Mia tries to reach out to Riley but gets no response. She is on the edge of her seat when she messages Jake but he doesn’t make her wait long. Apparently, her mom disconnected the Wi-Fi and took her phone because she didn’t finish her paper. Parenting 101 right there. Jake has posted the picture he took of them on his Finsta. The caption is just a heart. She likes it then goes through his photos, which are disappointing to say the least. Jake has racist memes that call COVID the Chinese virus. Mia is hurt by this. However, she doesn’t choose to unfollow him. Riley calls to check up on her and tells Mia to forget him, there is so much more going on in the world. Mia has no clue what Riley is talking about and checks her feed. Videos of protestors for George Floyd come up.

I will admit that for a portion of this episode, I had to ask little bro what some of these things they were playing or talking about. Socials I get, VR and video games are currently out of my lane. Finding out that Jake is racist was probably best for Mia. She lied about her interests to get his attention, which is not good. I do know how she feels, it sucks finding out that your crush is a bigot of some form. The ending leading to George Floyd is unexpected but we can’t avoid that topic. It had an impact.