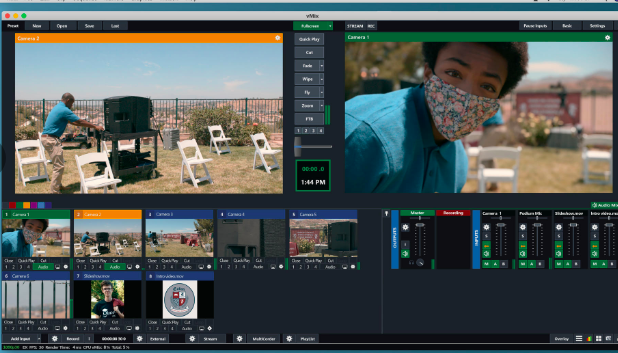 May 30, 2020: While preparing for a social distanced graduation, Corey (Asante Blackk) watches feed on the peaceful protestors. His boss, John (Ayize Ma’at), is upset because his van was tagged “ACAB” and looters have stolen his equipment. It is the first job he has had in months and the protesting is getting in his way. It is clear that Corey wants to leave early but John is problematic. Corey gets a call from his girlfriend Ayana (Lovie Simone), who has a plethora of posters for the protest that evening. He informs her that John may not be down to letting him leave early. Ayana is not surprised, stating that John doesn’t seem to realize that he is Black. Corey insists that he will do what he can to make it to the protest.

John makes a comment on how white people are messaging him to check on his well-being. The two make light jokes about how this made white people realize racism is a thing. Corey asks to leave early for a protest — after all he did arrive early to setup everything. John refuses, which prompts the conversation of what is the right way to handle a Black man getting killed by the police. John thinks that learning and building a Black-owned business is the right way, unlike going to protest during a pandemic. He points out that COVID hits Black people the most and doubts that the “kids” have a list of demands. Corey is quick to bring up the list of demands and the history of police. John says that Black people need the police. What the living hell. I want to punch John.

Corey points out that the system is against them and they should be protesting. John thinks that the protesting is nothing but an excuse. He can’t say George Floyd’s name, which Corey catches him on. Saying his name helps them remember who he was as a person. John, unfazed by the statements made, tells Corey to get back to work or he is fired.

Ayana calls again, at the right time to calm him down. Corey can’t afford to lose his job during this pandemic and backtracks on going to the protest. Ayana reminds him that they are protesting to make sure something like this never happens again. However, Corey needs the job to pay the bills. His mom isn’t getting any hours. Ayana just wants him to be happy with his decision.

John is surprised that Corey won’t continue to work despite all that he has done for him. He has kept him on payroll and without this contract job, John loses his business. Corey appreciates it all but wants to fight for a better future. John points out that things have gotten better for Black people because of the good works of MLK, Thurgood Marshall, and Shirley Chisholm; what Corey is experiencing is nothing compared to what they went through. He thinks that Corey going out to protest is giving white people a good reason to lynch. Lord have mercy. Corey hits him back with names of those killed by the police. John surprises him by knowing a list of names. John won’t protest because he thinks that they can fight it another way, not by getting to the killers’ level. Corey doesn’t care about the property, he would rather protest. John lets him go on with his choice.

Corey drops a bomb by letting John know that he saw who tagged his van and didn’t do a thing to stop them. He thinks John has a plantation mentality. This enrages John. He wants all the money he has invested in Corey, including the very shirt on his back. Corey gives it back, while John yells about how hard it is to build a business as a Black man. He did it all for Corey’s generation. Corey states that John can rest, his generation’s problem is theirs, too. I applaud his courage and vigor.

This has been an ongoing argument between generations. Gen Z have been bold with fighting the system, and I can’t blame them either. Earlier generations have learned a different way of dealing; it doesn’t seem to be working for us. I just hope that we can find a common ground but either way, we need stop the system.

These episodes are not what I expected. They really hit the issues that have hit us all through the pandemic. It is good to really see what other households are going through, too. I’ll admit that I teared up and had emotional reactions to each episode. Thank goodness that some of us are blessed with the ability to video call each other or join Zoom meetings that keep us somewhat sane. George Floyd and the countless others deserved to be discussed. I just hope that the conversation brings a change. These were hard to get through. My only issue is that it took forever to learn the names of the characters.

‘Social Distance’ Season 1, Episode 3: “And We Could All Together/Go Out on the Ocean” — RECAP