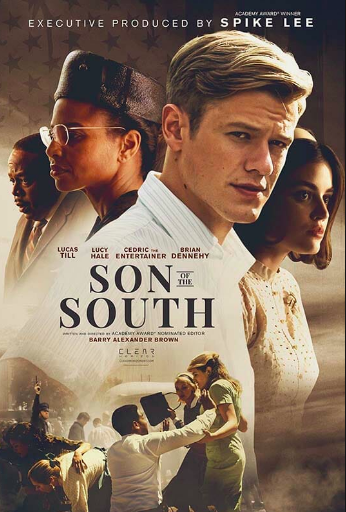 Son of the South is a perfect elixir to soothe the wounds inflicted by the conspiracy theory believing far-right relatives that every “liberal” white person apparently deals with, back in the middle-American “home town” they escaped from. Son of the South is a biopic is based on The Wrong Side of Murder Creek, the autobiography of civil rights activist Bob Zellner (Lucas Till).

Bob Zellner, a trailblazing civil rights activist, is the grandson of an Alabama Klansman. Son of the South tells how Zellner chose to work for the Student Non-Violent Coordinating Committee (SNCC) in the early 1960s. Mr. Zellner became SNCC’s first white field secretary and was arrested 18 times with John Lewis and the Freedom Riders. Over 50 years later, Mr. Zellner and his wife Dottie (who met and married working for SNCC) are still activists/organizers working with the North Carolina Forward Together Moral Movement and Rev. William Barber’s Poor People’s Campaign. There is so much nuanced relevance to Mr. Zellner’s life story and his role in the civil rights movement, but sadly Son of the South uses broad easy strokes to attempt to tell a complex American story.

The film begins with a bloodied and beaten Zellner, riding in the back of a ’57 Chevy with a group of fellow sons of the South, on his way to what could be his own lynching. In a voiceover, Zellner muses, “A lot of white folks have a short fuse when it comes to civil rights. This group, the torch that lit their fuse, was a college paper I got assigned to do with four of my friends. A paper on race relations. That’s what could get you killed. A senior paper.”

The opening credits reveal a languid montage of beautiful images of the South set to music that reminded me of that TV series with Carrol O’Connor (Archie Bunker from All in the Family) from the ’80’s In the Heat of the Night. Once the opening credits finally end, the film flashes back to the previous year.

Zellner’s a senior at a Methodist college. He’s got the steady girlfriend and a motley crew of college buddies. He’s smart, top of his class, and on his way to graduate school up north.  Young white and free with the world ahead of him, just as soon as he finishes his final group paper on race relations.

Zellner decides he and his friends need to actually go and attend service at the Black church where Rev. Abernathy (Cedric the Entertainer) will be guest preaching and Rosa Parks (Sharonne Lanier) will be in attendance. Zellner’s peers and teacher remind him of the risks of going to a Black church, but Zellner blows everyone off and convinces his four classmates to attend the service with him.

That one small action blows up in his face, and the university threatens to expel the boys just weeks before graduation. The KKK arrives at the University to set those five white boys straight.  Turns out, Bob Zellner’s granddaddy is a head Klansman and is part of the posse. Zellner’s Methodist preacher dad arrives for an impromptu family meeting in the middle of the street, right in between the college students and the KKK. The temperature cools down.

SNCC gets word about the incident and invites Zellner to the home of civil rights activists Virginia (Julia Ormond) and Clifford Durr (Greg Thornton) for a friendly dinner where the Durrs and Rosa Parks attempt to recruit Zellner to SNCC. Zellner brings his girlfriend Carol Ann (Lucy Hale) along. Carol Ann thinks that  Rosa Parks and the Durrs were overstepping trying to recruit them into the civil rights movement, but Zellner flashes back (within the flashback) to a time where he was pressured to brutalize some Black folks. Later that week, Zellner views a news report that John Lewis and the Freedom Riders are coming to Alabama and rushes back to the Durr’s house to warn them not to come protest, and the story takes flight.

Hollywood loves to see Black women and men brutalized on screen and Son of the South isn’t afraid to go there. In the way too long Freedom Rider scene, not only does the audience witness Black women getting stomped in the street and punched in the face by white men, they get pulverized by white women using purses with bricks inside them as weapons. There was a time in American cinema where the portrayal of Black bodies being brutalized by white racists was shocking. After 50 years of an entertainment industry and news media that constantly shows blatant violence against Black people nonviolently protesting it’s no longer shocking or surprising.

One would think a film about the civil rights movement wouldn’t invite in the white savior trope, but the scene where our blonde-haired leading man carries Joanne (Lex Scott Davis), the beautiful mocha skinned Black woman in his arms (slow motion) through an angry mob of white people to safety is laughable. When it comes to gender, frankly, the film got on my nerves. Carol Ann, the white girlfriend, is virtuous, saving herself for marriage, and Joanne, the light-skinned Black woman who not only speaks five languages, is a professor and lived in Paris, visits Zellner’s room in the middle of the night with a Mai Tai and jumps into bed with a man whose motto is, “I’ll try anything three times.” It seems as if these characters were just thrown in to break up the narrative with a love story, which doesn’t work. A more interesting aspect of Zellner’s story to explore is why do white people have to dominate other cultures and what does it really take for a white man to disrupt a system that nourishes him?

This movie reminds me of the afterschool specials (morality movies) that latchkey kids used to watch back in the ’80s. This is a feel good film for anyone who experiences white guilt about the price of their “privilege” and needs to feel better about their ancestry. The writer-director Barry Alexander Brown constantly reiterates how hard it is for white people to act against the mob and recognize the humanity of Black people. That’s sad and infuriating.

The beautiful thing about a biopic is that in less than two hours you can travel through a lifetime.  There’s so much more to Bob Zellner’s life than this movie reflects. Like, how did he meet his wife, activist Dottie Zellner (also white and worked for SNCC)? I would have loved to see Zellner’s relationship in the later years of SNCC when the movement evolved and Bobby Seale pushed to shift SNCC’s strategy and have the white members focusing on educating white folks instead of building a multi-racial movement.

Son of the South does not tell a nuanced story. The actors did the best they could with a mediocre script.  Like 2019’s Green Book, I’m sure Son of the South will make well-meaning white folks feel like they aren’t one of the racist ones. Just because a movie has Spike Lee’s name attached to it, doesn’t mean it’s gonna be revolutionary.

Son of the South will be available in select Theaters, On VOD & Digital February 5, 2021.