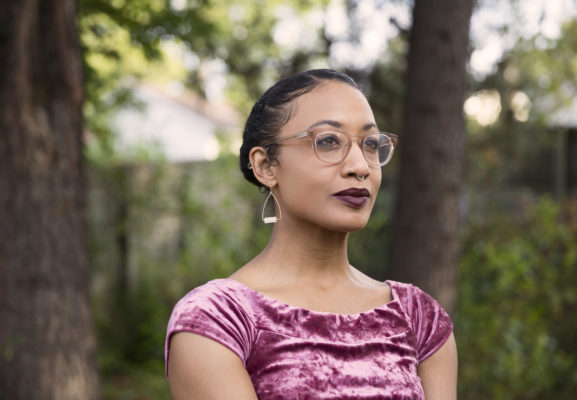 If you have not yet watched Eyes on the Prize: Hallowed Ground, what are you waiting for?

This documentary is a visually stunning work that is a reverent homage to the original Eyes on the Prize documentary while also being an honest reflection of current times. Director Sophia Nahli Allison did a phenomenal job at bridging the generational gap between the two documentaries. (This article focuses on Allison and her process of creating this artistic co-mingling; however, if you’d like a full review of Eyes on the Prize: Hallowed Ground, you can read the BlackGirlNerds.com article written by Jeanine T. Abraham.)

BGN had a telephone conversation with Sophia Nahli Allison about how she was affected by the original Eyes on the Prize, the driving force for revisiting the documentary now, and her hopes for the impact of the new documentary.

Had you seen the original Eyes on the Prize before you were brought on to this project?

I was actually born the year Eyes on the Prize came out, so I saw it as a young girl. I watched it again when I was in college, taking different AP courses. It’s a series that I’ve always deeply admired and was introduced to at a very young age.

How did the original documentary impact you?

I remember Emmett Till’s section of Eyes on the Prize really terrifying me. I had never seen those images. It was a new story to me. It really created this beautiful dialogue between myself and my mother, who grew up in the South and, as a young girl, traveled from Chicago to the South to see family. She was able to share this history that was still very much part of her experience. It really opened me up to these profound historical moments of resistance and liberation.

What was the driving force for revisiting the documentary at this time?

Joy Gorman-Wettels, at Anonymous Content, has been working for the past ten years to bring Eyes on the Prize back to an audience. Throughout the years, Eyes on the Prize Part 1 and Part 2 have gone through being accessible to not being able to find it. It used to be in schools being taught all over the country. It’s still being taught, but I’m just wanting to have this be something that people can access again. Joy had been in conversation with Mervyn Marcano and Patrice Cullors about them being a part of this. Mervyn Marcano mentioned it would be great to have a special that not only honors Eyes on the Prize, but that is this bridge that connects people to these histories of the past, these present day histories, and then also the continuation of Eyes on the Prize that HBO will be doing. I came in to construct and build this story of what Eyes on the Prize: Hallowed Ground would be and what it could be based on these concepts of a special that’s the bridge and also introducing a new audience to the original series.

Kayla Reed discusses ancestral rage. That was not a term I heard before but have experienced and didn’t have the words for. What made you explore that?

What’s interesting is when I began creating Hallowed Ground, I rewatched all 14 episodes of Eyes on the Prize. I went through and made really detailed notes of the different interviews, the different archival histories that I wanted to revisit in Hallowed Ground. I’ll never forget seeing Myrlie Evers‘s interview about her rage. I thought it was so powerful to allow there to be this space held for a Black woman to say this is how enraged she was. So often our anger is policed. We are demonized for anger, so I really wanted there to be a healthy conversation around what does it mean to feel this rage and that it is healthy to acknowledge the rage. All of my questions for the interviewees would always return to some sort of ancestral connection, so during my interview with Kayla, when speaking about these different spiritual connections, she mentioned ancestral rage.

Talk about the decision to specifically address the safety of Black women and girls in the new documentary.

I always knew that we had to make sure Hallowed Ground held spaces for those who are always at the forefront, those who are the most vulnerable, and those who are the least respected. As a Black queer woman, my work will always center Black girls. I will always want to hold space for them. It is very important for us, if we are going to continue to work towards this new future, to work towards liberation. Then we have to address the issues that are preventing that from happening. We have to acknowledge that Black women, Black queer folks, and Black trans folks are the ones who are at the forefront and are the ones who are introducing concepts of intersectionality. What does it mean to hold space for all of our experiences as Black folks? I have never seen a documentary that focuses on Black history that holds this much space for Black women and queer and trans folks.

What was it like to work with Melina Matsoukas, and how did working with her affect your directing?

We all called her my fairy godmother because she really just supported me telling the story I wanted [to tell]. She was like, “This is your creative vision, this is you, I’m just here when you have questions about anything in the industry, when you have questions about how do you navigate making your first feature.” She was just such a phenomenal inspiration of seeing another Black woman who has successfully built her career around visual storytelling supporting me in that process. Melina was always there to support however we needed, whatever support I needed, with understanding the balance of how we would edit all of these different elements together. I consider her a mentor, like a big sister. She understood how to support me as an artist.

What do you anticipate or want the impact of this new documentary to be?

For me as an artist, I want people to know that art, documentary art, and history can exist together. I really want us to interrogate new ways to create documentaries, new ways to engage with histories that have been traumatic in the past. But how do we offer healing and medicine throughout it? I want people to engage with Eyes on the Prize. I want them to go back and to learn that history. I want them to engage with Hallowed Ground and know that this is a bridge to connect them from the old into this new radical future that I’m dreaming of. I want there to be more inclusive conversations when discussing civil rights, when discussing Black history. We have to acknowledge how powerful the role of Black and trans women has been in this journey and to acknowledge the histories that have been left out of the archive. What is that process of rebirthing them and engaging with them?

Eyes on the Prize: Hallowed Ground is currently available on HBO Max.