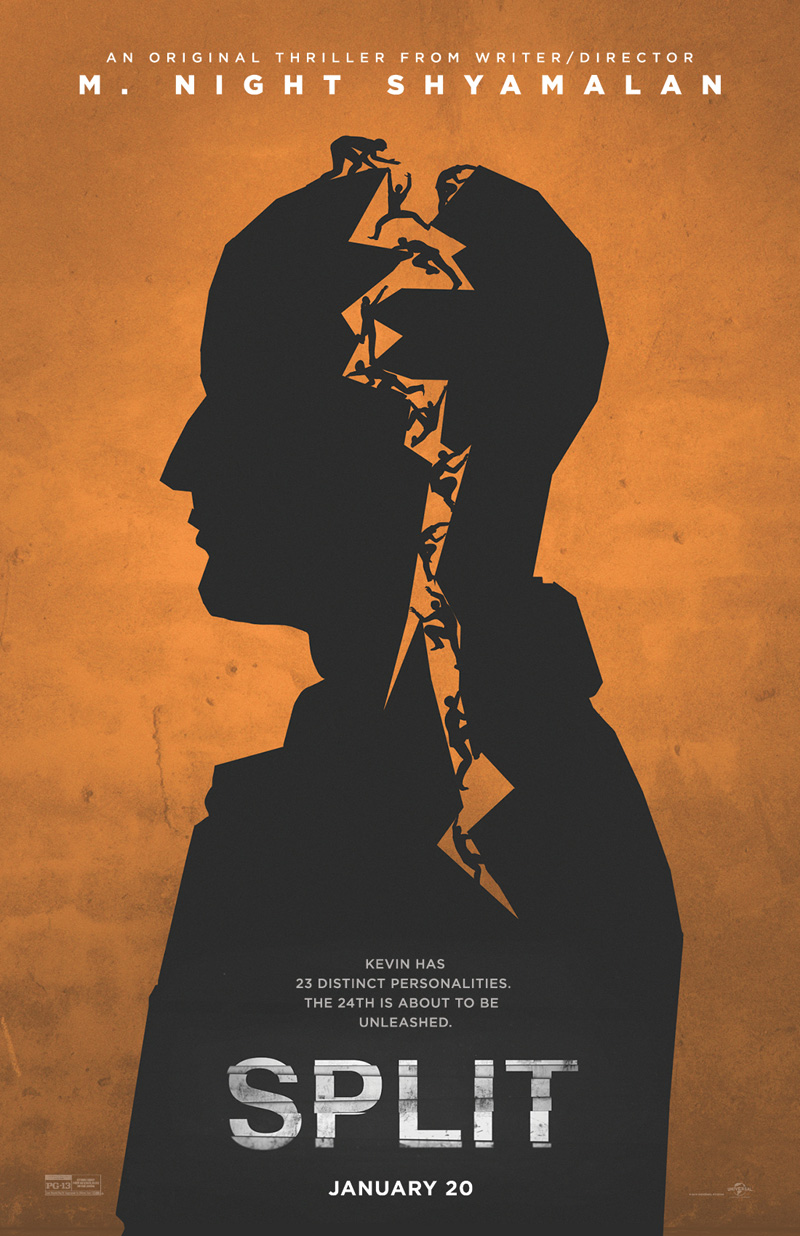 Short Version: James McAvoy delivers a captivating and visceral performance with a slight twist on the traditional the split personality storyline. Though not perfect M. Night Shyamalan continues his reincarnation as an independent auteur. 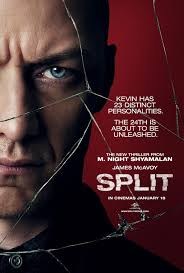 Sitcoms and soap opera writers have been using illnesses like amnesia and dissociative identity disorder (DID) to facilitate ever more outlandish storylines for decades. The illnesses are often weaved in the story with implausible and cartoonish fashion. What Christopher Nolan and Guy Pearce did for amnesia in Memento is what M. Night Shyamalan and James MacAvoy attempt to mirror for DID in Split.

With promising last outing The Visit, M. Night Shyamalan produced arguably his first enjoyable film since Signs. With a dark and demented twist on “Off to Grandmother’s house we go,” the Visit was Shyamalan’s first bright spot in over 15 years.  Produced by indie upstart Blumhouse on a shoestring budget, The Visit and Split forced Night to do something he hasn’t done since his debut, think small. He confessed as much to the audience in the Q&A following the film’s secret screening at Fantastic Fest.  As a critic and  moviegoer, I felt incredibly lucky to see the film so early without build up, hype, or whispers of a surprise twist. It’s not a leap assume that a Shyamalan film will have a twist, but no amount of guessing could likely clue you into the one in Split.  The best part about the “twist” is it is not pivotal to the story. It adds to the landscape, but you don’t need it to enjoy the film. By now most folks have heard a lot about the surprise but, if you haven’t yet, I beg you not to seek it out. Split’s twist is one of the best “oh shit” moments you will likely have in theaters this year so don’t cheat yourself.

Split stars James McAvoy, as Kevin a man affected with DID. Kevin has 23ish identities, and the film centers around a power struggle between his lead personality, Barry, and his more dysfunctional personalities. In the opening scene, one identity Dennis abducts three high school girls after a birthday party.  After locking the girls away for some unknown purpose – the girls, Kevin’s various personalities, and his shrink Dr. Fletcher (Betty Buckley), string the audience along a tightrope of ever building tension.

M. Night Shyamalan is a self-professed Hitchcock fangirl. Okay, he might not say ‘fangirl, ’ but his admiration and imitation of Hitchcock have been clear in every one of his works. Hitchcock was a master at inflicting tension and dread on his audience, and similarly, that’s M. Night’s strong suit. By striping down the narrative to solely focus on the girls trying to escape a desperate situation Night avoids the pitfalls of films like The Village or Lady in the Water. In Split there is not an act wasted on building the mythology, it just focuses on character motivation and rationality. McAvoy’s acting dexterity is on full display as he shines in perhaps one his best roles to date. 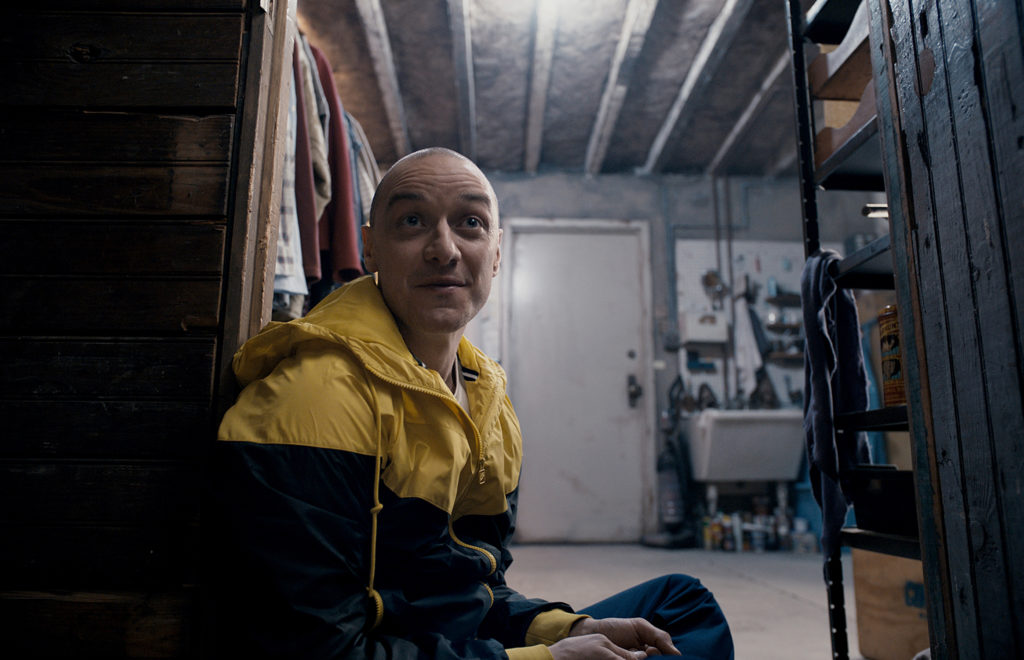 Kevin’s personalities are from the pages N. Night’s script, but it takes a brilliant actor like McAvoy to bring these charters to life. In the hands of a lesser actor, the film would have become cartoonish and unintentionally comical in the first 30 minutes. Instead, McAvoy’s subtle transformation between personalities is like watching a cinematic one-man show with 23 parts. At one point Kevin’s identity, Dennis is impersonating Barry in a session with his physiatrist as not to arouse her suspicion. Dr. Fletcher discovers the ruse and confronts him. Then slowly with a slight turn of his head and a shift in his gaze, McAvoy instantly morphs into the skulking deviant Dennis. The unnerving moment instantly illustrates the danger for the Dr. and transversely for the abducted girls.  Lead by Casey (Anna Taylor-Joy -The Witch); the three girls discover they are being held as sacrifices for “The Beast,” a deadly and terrifying personality that Dennis is trying ‘bring out.” Personality Patricia, a kinky Nurse Ratchet type in kitten heels, aids Dennis alongside Hedwig a precocious 9-year-old boy personality. Hedwig not governed by limitations on when he can “take control” is who allows Dennis and Patricia to subdue Barry and carry out their plan. 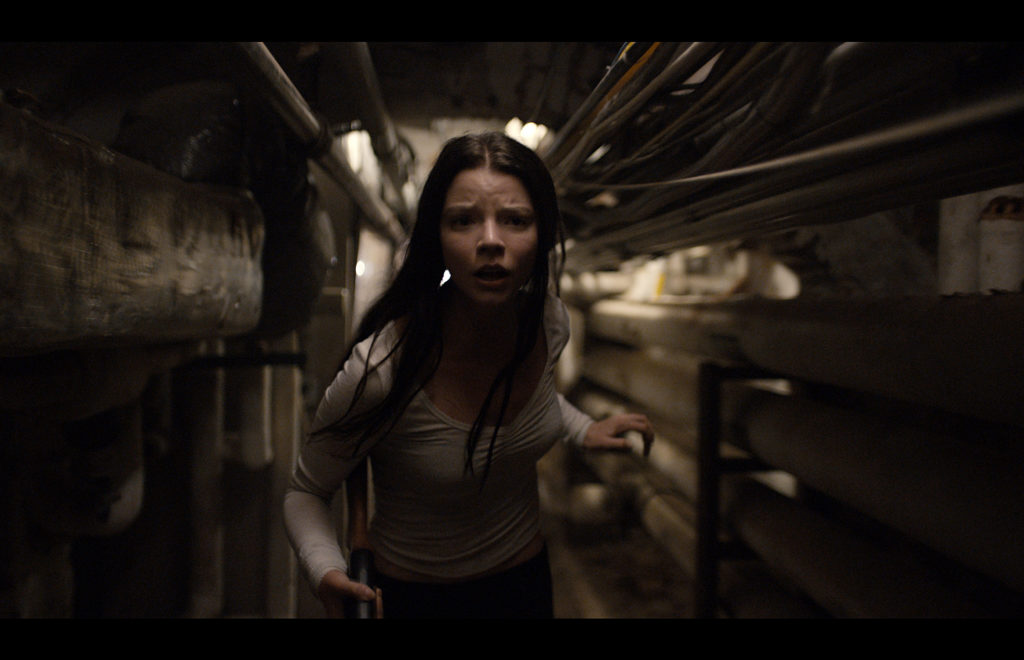 Locked away in what appears to be a basement, Casey makes several attempts to escape, at times playing on Hedwig’s age and gullibility to assist her.  Much of the third act is built around Casey’s attempts to escape. I don’t want to diminish her ability because truly she is great in the role, but to put it plainly, Anna Taylor-Joy gives great face. It is one of the reasons why she was so great in The Witch. In the more tense moments of the third act, the camera holds in close on her face. She conveys fear, confusion, and a desperate need to survive all in just a glance. Even the most of talented of actors would struggle to pull off that look, without words. As talented as I think Taylor-Joy is, let’s be honest, some of it’s in the genes.

Split is not without its faults. The last ten minutes should have enjoyed a heavier hand in the edit bay, and some of the third act dialogue is cheesy to the point of comedy. Overall, though, the film’s a solid thriller highlighted by a career-defining performance from McAvoy. M. Night has said that he wants to keep working with Blumhouse and working on smaller budgets. If he sticks to it, I think it is the best decision he’s made in years.

Perhaps with a few more films like Split, we could manage to forgive him for The Happening.