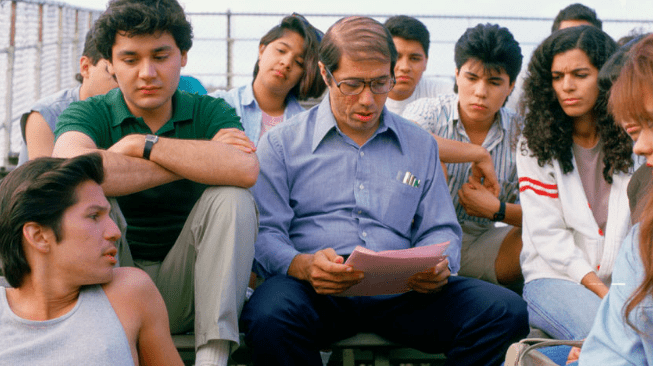 Before the Mexican American actor Edward James Olmos directed and starred in 1992’s American Me, a popular crime dramatic film that contrasts with his performance was 1988’s Stand and Deliver, about an inspiring Latino educator Jaime Escalante (played by Olmos). Escalante taught in California during the late 1970s. Olmos received an Academy Award nomination for Best Actor for the film, but his fellow nominee Dustin Hoffman took the win for the mesmerizing 1988 film, Rain Man. Stand and Deliver director Ramón Menéndez presented Latino families facing hardships that immigrants and Hispanics still endure today.

The film depicts Escalante’s passion in teaching mathematics to Latino high schoolers from working-class families in East Los Angeles area. Mostly the Latino students lack high academic skills, and they demonstrate a number of social issues. Angel Guzman (Lou Diamond Phillips) is one of the main students, intimidating with his gangster look, but Mr. Escalante doesn’t back down from him nor the other rowdy students in class. Mr. Escalante’s teaching methods and his sarcastic remarks attract the students’ attention.

In a teacher’s meeting, Escalante mentions his opinion about improving the school’s statistics by teaching credited calculus classes. The school principal and faculty think his suggestion is impractical because Latino students are not eager to learn advanced mathematics. By now, other teachers are amazed at how Escalante is able to control his students and ready them to embark on new challenges.

Over the past century, Latinos have migrated to America for a better life compared to their native country. Since Latino families still struggle financially today, it is common that teens attend school and juggle work all at the same time. In the film, Pancho (Will Gatoy) attends Garfield High School and works after school at a small fast-food place. Some Latino parents force their teenagers to drop out of school completely and focus on a full-time job, most likely in a fast-food chain or at a grocery store.

The father of Ana Delgado (Vanessa Marquez) is a perfect example of this poor choice. Since Ana’s father owns a restaurant, he prefers for his daughter to work with him and forget about school. Unfortunately, there was a time when more and more Latinos believed an education is not valuable, that they wouldn’t graduate high school nor attend college. However, recent statistics demonstrate, “As the Hispanic population in the United States has exploded, so has the number of Hispanics pursuing higher education. Between 2000 and 2015, the college-going rate among Hispanic high school graduates grew from 22 to 37 percent, according to the U.S. Department of Education.” This is a small but positive mark in educational prospects. The Hispanic rate continues to increase impressively.

Many teachers are deeply passionate about their careers and their students progressing academically. In the film, Escalante expresses, “It was your ancestors, the Mayans, who first contemplated the zero. You burros [idiots] have math in your blood,” in order to motivate his students. At times, teachers are at war with Hispanic students learning different school subjects. Some students don’t have the will to learn instead, becoming defiant and causing disruptions throughout the day, as seen in the film when Angel’s friend Chuco (Daniel Villarreal) arrives late to class, threatening his teacher, then no longer attending classes.

Angel could have followed Chuco’s path of dropping out, but Escalante was able to save him from the biggest mistake of his life. Many parents work more than an eight-hour shift or work two jobs, so the parental support is not seen when children or teens are disobedient and failing classes. Teachers have to work twice as hard in controlling disruptive students, so their students can become engaged in learning. Teachers combat these challenges throughout their career because they care for their students.

For many decades, Latino students wore their own casual clothing, typically blue jeans and T-shirts. Some male and female students vamped up their fashion by adding leather jackets to their everyday outfits, like Emilio Ramirez (Wade Dominguez) and Angela (Marisela Gonzales) in 1995’s Dangerous Minds film. Students dressed in this type of clothing triggers issues in campuses, bullying and fighting with other Latinos who are possibly in a lower social class within the same ethnicity. In an upper social class, non-Latino female students are dressed in miniskirts, blouses with blazers, and high heels or tight dresses to school (as in the 1995 film, Clueless or the 2004 film Mean Girls), which can still create issues of social class differences. However, in the past fifteen years, students no longer attend school in their own casual clothing in the State of Texas. Now, parents are required to purchase school uniforms for all school levels. Many parents might not have liked the idea of spending more money on uniforms, but students wearing khaki pants and collared dress shirts for males and females has reduced student bullying and issues stemming from social class differences. Students can see one another equally with their proper uniforms.

Now that America has been suffering with the coronavirus pandemic for about five months, the school environment has changed completely. Students couldn’t finish the 2019–2020 school year traditionally. School campuses are now ghost towns. Many teachers and students found online classes to be overwhelming, some not concentrating on school lessons. In the meantime, many parents were furloughed or lost their employment completely. At-risk families didn’t have enough food, own a computer or laptop, nor having access to the internet.

School districts encountering these challenges needed fast solutions, such as distributing free food and electronic devices. Students were able to finish the school year online. Some high schools encouraged their graduation ceremonies to be on YouTube, while other schools cancelled ceremonies because of the horrible coronavirus spreading rapidly. At one point, state exams were in discussion to be waived for the new school year. Paul Livengood states, “No matter what the COVID-19 outlook is for Texas, students will be required to take the State of Texas Assessments of Academic Readiness (STAAR) test in the 2020–21 school year.” The new school year will begin soon, and many school systems will continue the virtual learning approach. While other states did not practice social distancing and students returned to campuses, sadly they were affected by the coronavirus.

Stand and Deliver is one film that can inspire people to accomplish their goals. There are countless of teachers who carry the same enthusiasm and fortitude similar to the magnificent Escalante in public Latino schools; it’s the ganas (desire) to make that strong impact in another’s life.