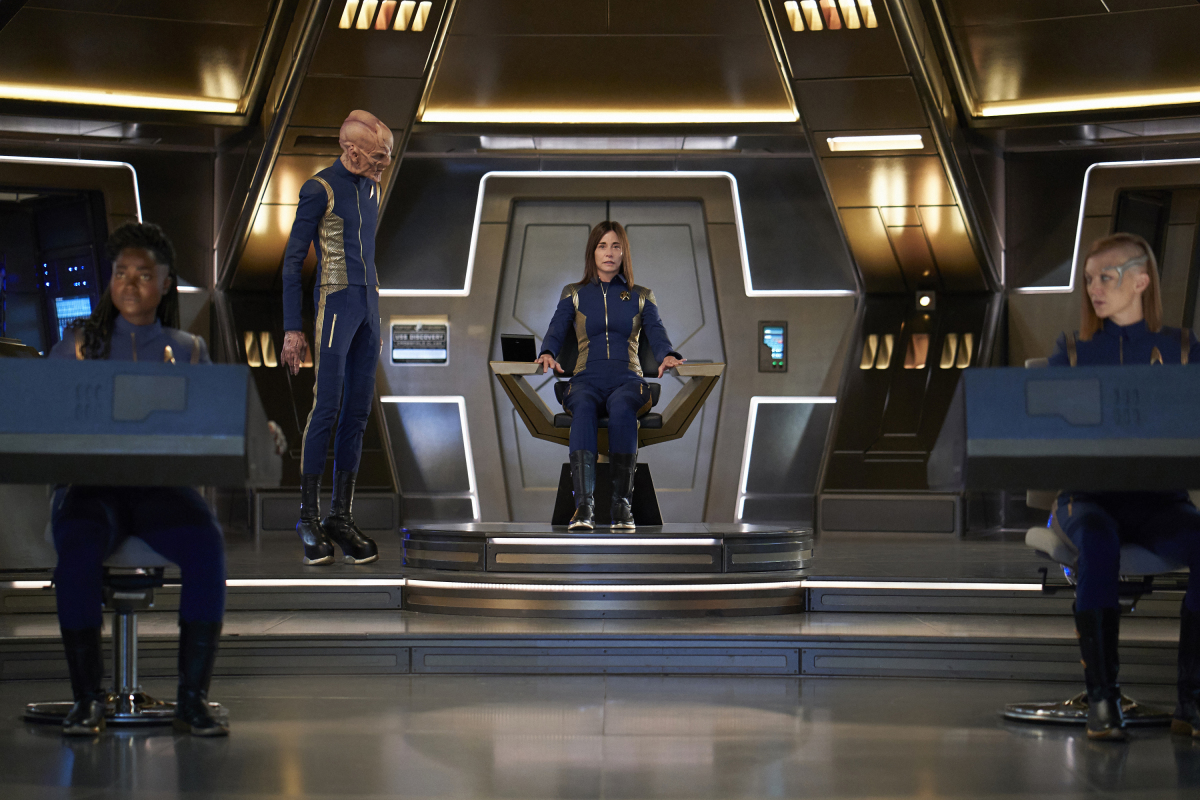 So, no, it was only painful to watch because so many of our quickly-becoming-beloved characters are suffering in many ways, and suffering more than they have during the entire admittedly dark and conflict-filled season. So much so that I was reflecting fondly back for the good old days when their biggest problem was Mudd’s screwing around the space time continuum while Michael and Ash slow-danced, with Tilly drunkenly flirting with boys. Sigh.

Yes, this episode seems almost without hope and light. But despite what some might want to believe, Discovery is not all gloom and doom. The writers, true to Star Trek form, gave us glimmers of hope for better days soon to come.

So, here’s the good and the bad that happened:

As we found out at the end of last week’s episode, the Discovery escaped from the Mirror Universe and made it back to ours, to everyone’s relief except, possibly, MU Philippa Georgiou, who Burnham just couldn’t help kidnapping, er, rescuing, er… tackling during transport and bringing her along. However, they overshot the mark and ended up nine months in the future, which normally wouldn’t be a problem (this is Star Trek, remember? These people travel back and forth in time like I go to Baskin Robbins: too many times and too often for it to be a good thing) except for the fact that the Klingons have won the war.

Speaking of Georgiou, when Burnham materializes in the transporter room, Saru is there to greet them, and Georgiou not only calls him slave, she casually lets drop that she and Burnham had Kelpien a l’orange for dinner the night before. Awkward! But Saru, badass that he’s turning out to be, doesn’t even blink, having her transported and confined to guest quarters. Later, he confronts Burnham about her lie that there were no Kelpiens in the MU. Michael confesses that she wanted to spare him the pain of knowing they were pretty much only valuable in the MU as slaves and hors d’oeuvres.

Can you keep a secret?

Admiral Cornwell and Sarek board Discovery and fill the crew in on the last nine months. The Klingon Empire has won—or is at least winning—the war, but isn’t actually an empire, just a fractured group of warring factions with nothing in common but a desire to kill all humans and their allies. During a meeting with the senior staff, Cornwell and Sarek order all the information about the MU classified and destroyed. As Sarek warns and Stamets agrees, the knowledge that one might pop over to the MU might prove too tempting for someone who has, for instance, lost a beloved family member, like so many Federation citizens. I suppose this exchange is offered as an explanation as to why the MU is still a secret when Kirk’s Enterprise stumbles across it.

Honestly, that doesn’t seem likely to be effective. There’s an old saying that the only way two people can keep a secret is if one of them is dead. Georgiou has a much more realistic approach to the problem of keeping that particular secret when Burnham blurts it out: she murders the crewmembers present, save one, who she bribes with a planet to keep his mouth shut. Knowing her, that guy would soon meet with a fatal accident.

Yay, we win (said in Klingon)

When the Discovery arrives at Starbase One, Cornwell discovers that one Klingon House still manages to execute a successful attack on the starbase itself, leaving tens of thousands of Federation citizens dead and an already decimated Starfleet down by three more starships. When the Discovery arrives there, Cornwell, now in command, goes all shock-y and just stares at the screen, leaving the crew in peril since there are Klingon ships still in the area. When they are scanned, the erstwhile acting Captain Saru, seeing she’s pretty much useless by then, orders the navigator to warp out of there to safety.

I gotta say…wow, Saru is the shit these days! His command voice is actually sexy and he just owns that captain’s chair. I hope that’s where the writers leave him, because I honestly feel like he has found his calling.

Desperation is a theme in this episode. After seeing the devastation of Starbase One, Cornwell goes to talk to L’Rell, the Klingon prisoner whom she respects, and tells her the truth about how the war is going, then asks her how to stop the war. L’Rell tells her the truth: the war won’t end. “Klingons have tasted your blood. Conquer us, or we will never relent.” So, Burnham and Cornwell approach Georgiou to find out how she defeated the Klingons (It’s weird to me that there is nothing in the script from the Discovery writers that Michael is actually repeating the mistake that started this whole war: trying to save Georgiou by asking for advice about defeating the Klingons. The first time she asked her father figure, Sarek, but this time she asks her mother figure’s doppelganger!).

Making a deal with Georgiou to lead an attack on the Klingon homeworld isn’t the best idea, and not a typical move on the part of the Federation, but it is a pretty realistic illustration of the toll that war takes on one’s sense of morality. Cornwell, resolute, and Sarek, possibly thinking about what happens to the planet Vulcan at this point, contact the Federation leaders, who agree to follow Georgiou’s advice to attack the military targets on the Klingon home world to end the war.

But what else was agreed to? Because Sarek, speaking privately with Georgiou, seems to negotiate an exchange of her freedom for a guarantee that the Klingons will permanently be put out of commission, leaving the ship and saying to Burnham that the plans to fight the Klingons are ”evolving”. When Burnham asks for more details, he deflects, giving her relationship advice re: Tyler instead. He says he understands her mixed feelings about Tyler, with him being a little bit Klingon, a little bit Rock-Roll, with parents being killed by Klingons, etc. But before he leaves he tells her, ”Never regret loving someone, Michael.”

So, like I said, almost everything about this episode is gloomy and depressing. But there was one wonderful moment of light. The success of the plan to attack the Klingon homeworld depends on the Discovery using the spore drive to do a pinpoint jump to the interior of the planet. And the supply of spores on the Discovery is practically gone. No spores, no jump. But it turns out that there is still a small supply of mycelial spores on board, and Stamets comes up with a plan to terraform a small moon and quickly grow a new crop from a super spore sample that he has. You might think that this will take months, but apparently it only takes mere minutes.

I’ll spare you the techno babble preceding the planting of the spore samples but, I have to say, the resulting laser light show is gorgeous. All crewmembers look properly awed, and the mycelial forest springs to life in a Rainbow Bright brilliance of squiggly space plant life and releases its sparkly spores. The effect is nicely done, not overblown, and provides us with the sight of the crew actually smiling, if only for a moment.

Of course, there is no way we are going to end on a light note. This ain’t Star Trek: Next Generation, you know. Nope, first we have to deal with Tyler, who is now Voq-free, and Burnham. They seem to be pretty much kaput, but Burnham refuses to see him for most of the episode. She has no apparent sympathy for him. The rest of the crew, however, rallies around him. Saru refuses to treat him like a prisoner. Stamets encountering Tyler by accident, though unable to forgive him, at least seems to accept that Tyler feels regret and pain at the memories that aren’t really his. Tilly, of course, leads the charge to get the crew to bring Tyler back into the fold by sitting down with him in the in the mess hall. She also pleads his case with Michael, but no dice.

She does go to see him eventually, but only long enough for him to guilt trip her about abandoning him…even though she knows it wasn’t him, but Voq, who tried to kill her. He also calls her on her inherent bias against Klingons because of her parents as the real reason she doesn’t want to be around him anymore. But, again, he’s speaking out of desperation—this episode’s overarching theme—because he doesn’t want to lose her. She acknowledges the direct hit, but gives him no reason to hope that they will be together again.

So that’s that. Sigh. This sucks.

That’s CAPTAIN, to you, buddy

Okay, I’m actually going to deduct points for the episode for this decision. I get that they felt the need to seek the advice of Georgiou. I don’t get why they think that they have to put MU Georgiou in the captain’s chair. You heard me: Cornwell and the Federation apparently feel they needed her to lead the charge, and the only way for her to do it was to be acting captain. They came with a ridiculous story, easily shot down, that Georgiou was found alive and smuggled onboard the Discovery just in time to lead the troops on this top-secret mission. Huh??? They realize the Discovery crew just spent several weeks in the MU, right? They aren’t going to be like, “No, dude, that is TOTALLY the evil Georgiou. WTF?”

I assume they have a reason, but it better be good.

So, good episode, but like I said, I’m deducting points for the Georgiou Maneuver and the Burnham-Tyler Implosion. Can’t wait for the finale!