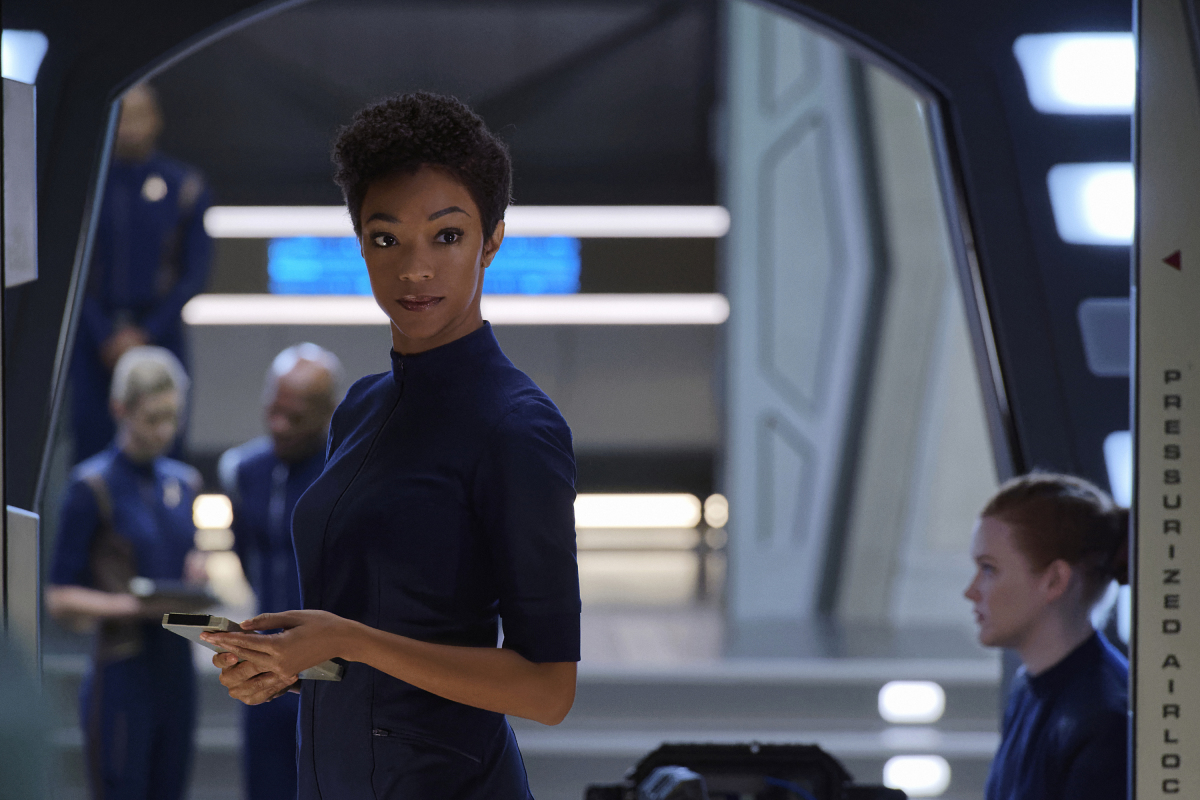 I had to look up the meaning of the title of Episode 6 of Star Trek: Discovery: “Lethe” (and I know I’m not the only one…right?)

The past is very present in this episode.

The story opens on Vulcan with Sarek boarding a ship carrying him and a pilot/assistant to what we later find out is a secret mission to try to negotiate peace between the Federation and the Klingons. But the pilot turns out to be a Vulcan terrorist who has his own secret mission: to kill Sarek by turning himself into a bomb and blowing up the ship. He fails, but Sarek is still gravely wounded and his ship adrift in a nebula.

Because she carries part of Sarek’s katra, Burnham experiences a jolt and feels Sarek is near death. At her request, and over the Federation’s express objections, Lorca launches a rescue mission. The Discovery can’t fly into the nebula to pinpoint Sarek’s location because techno babble, so Stamets fashions a neural enhancer for Burnham to boost her signal to and from Sarek, then she, Tilly, and the Discovery’s newest ace pilot, Lt. Tyler, set off to locate Sarek.

While the shuttle is in the nebula, Lorca is visited by his friend Admiral Cornwell (Jayne Brook). She tells him he’s out of control and making enemies at Star Fleet. She intimates that he is suffering from PTSD which he avoids talking about by giving her booze and having sex with her (Yes, really). But this only works until she accidentally wakes him from his post-coital nap and he reflexively grabs her by the neck and holds a phaser to her head. She tells him he’s in no condition to command and Star Fleet is going to hear about it.

Meanwhile, on the shuttle, Burnham manages to reconnect with Sarek, who is reliving the moment in his past where she is rejected by the Vulcan Expedition Forces. Every time she attempts to draw him out, he violently pushes her out of his mind (which makes for some great fight sequences).  Eventually, she breaks through to him, and after a father/daughter therapy session, she is able to wake him so he can turn on the homing beacon.

When they get Sarek back to the Discovery, it is apparent he is in no condition to continue his mission. Lorca suggests that the admiral take his place and she agrees, but, surprise (not)! It’s a trap! Admiral Cornwell’s men are killed and she is taken captive. The Klingons who sent the invitation were killed by other Klingons put in place by Kol. When Saru tells Lorca what has happened, he assumes that Lorca will mount another rescue mission. Instead, Lorca tells him to contact Star Fleet for orders. Saru’s reaction is a bit like our own. Wow.

So where does “Lethe” come into play in all this? Who wants to or can’t forget what?

What Sarek wants to forget 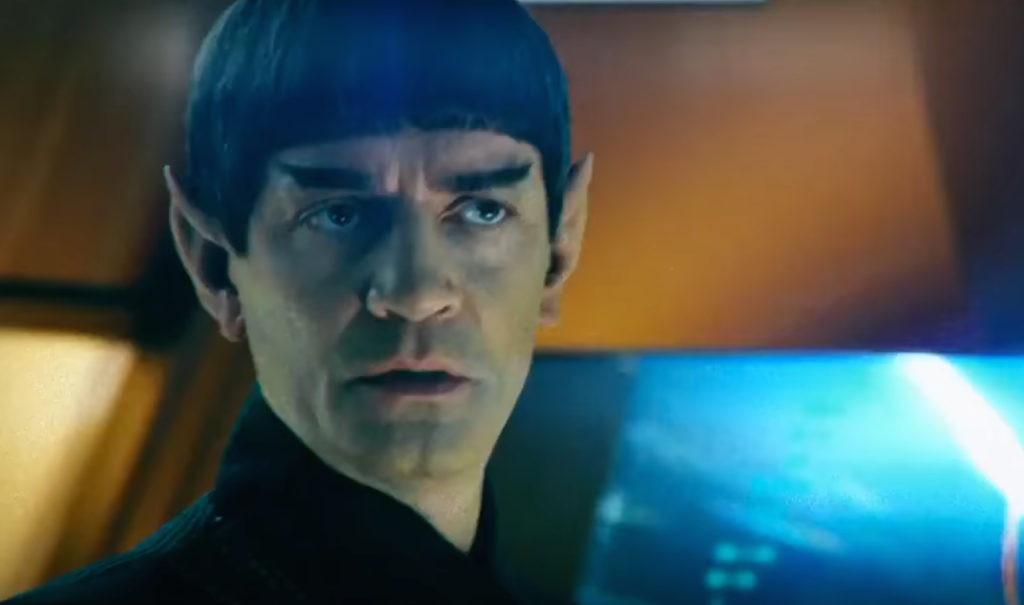 During his rescue via katra, the memory that he tried to hide from Michael, Sarek’s secret shame, was that he had chosen Spock over Michael when told he had to choose only one to be admitted to the Vulcan Expeditionary Forces. How to choose between two children struggling to find a place in what was, for both, really, an alien culture? Sophie’s choice, indeed.

Of course, Michael, hurt and angry, confronts him, calling him on his attempts to evade her questions about why he chose to lie to her and, presumably, his wife Amanda, and he admits he was ashamed. That is a HUGE admission for a VULCAN and one which seems to bring Michael some satisfaction. Sarek, her perfect father, is not so perfect. His shame isn’t logical. He has feelings, and he struggles with them, just like she does.

What Michael can now forget

Freed by the truth of Sarek’s confession, Michael seemed to be free of the last burden she’s been carrying around. The ghost of Georgiou seems to not haunt her so much since the arrival of the will. Similarly, Sarek’s confession seems to free her from needing to be the perfect Vulcan for him, to make him proud. Of course, there is more to unpack between them now and, as we know from Spock and Sarek’s relationship, that could take years. But Michael tells him, “We’ll have this conversation one day…Father,” as she leaves a sadly beaten looking Sarek in sickbay.  I don’t get the feeling she hates him, but she is royally pissed, which is actually a positive thing.  In the past she worshiped him. This is much healthier. Ah, if only all daddy issues could be solved by a mind meld.

There is one tiny thing that set off alarm bells. Right before she talked to Sarek, Michael was offered a permanent place on the bridge as science specialist by Lorca, which she accepted. But there was something kind of hero-worship-y in her eyes when she told Lorca how she was proud to serve under him. Transference?  Hope not. Hmmm.

In her last scene, she sits down for a cuppa and a friendly chat with Tyler, and she seems, for the first time since before she killed that Klingon and started a war, actually kind of relaxed.

Lorca appears to be suffering from PTSD. After we found out that he blew up his first ship and her crew, and that he refuses to have his resulting eye injury fixed, we suspected that. What we don’t know yet is how he got the Discovery. Anyway, as we have known from episode three, Lorca is deeply damaged, more so than the admiral knows, though she will no doubt have time to figure it out while she is a guest of the Klingon Empire. He is apparently so obsessed with winning the war and, we assume, avenging his crew, that he is willing to sacrifice anything and anyone to do so. Including his good friend the admiral, who threatened to take away his command and send him away for treatment. Because come on, he had to know that the admiral was walking, correction, that he was sending her into a trap. Why do people always threaten people they suspect are dangerous then turn their backs? Sigh. So, Lorca will never partake of the waters of Lethe. His pain is apparently all he really has.

What Admiral Cornwell hopes she can forget

She is a psychiatrist, and she has known Lorca for many years.  Yet, she let down her guard with him twice. The first time you can kind of understand. They were drinking; they had been lovers once, she was remembering the old days, and decided to let her hair down for fifty minutes (yeah, he said fifty minutes, and in that time, they managed to have sex and fall asleep. Hmmm…). That slip nearly cost her head.

The next time, though, despite now knowing he is damaged, and knowing all he has been willing to do to keep the Discovery and avenge his crew, she let him talk her into meeting with the Klingons. What? How did she get to be an Admiral? Of course, she was a peacetime admiral so I’ll give her the benefit of the doubt. Still, you know Cornwell’s kicking herself.

Conclusion
This episode feels very much like Star Trek, though not as much as last week, in my opinion. There were moments of real drama, less action, and a smattering of lightheartedness (I so want one of the “Disco” t-shirts that Burnham and Tilly were wearing while they jogged), which make for the best episodes. But it still isn’t letting us get too comfortable. Captain Lorca really does remind me a little too much of Matt Decker, and I feel like he’s going to meet a similar end. I don’t think we will get a Kirk or Picard out of this show. It will be interesting to see if he survives into the next season.

*** STOP READING NOW IF YOU DON’T WANT TO KNOW WHAT MOST STAR TREK FANS ARE ALREADY SPECULATING – THEORY AND POSSIBLE SPOILER AHEAD. ***

What the ST: D producers want us to forget

Remember in the original series when Klingons looked kind of like humans? You know, before makeup artists grabbed hold of the franchise and dragged it kicking and screaming into the makeup chair? Remember the conversation between L’Rell and Voq about how he’ll have to give up everything to win the war and honor T’Kuvma and all that stuff? Remember how Lt. Ash Tyler looked pretty good after being a Klingon prisoner for several months? And how he was able to help fight his way out of the Klingon ship pretty easily?

And where is Voq, by the way? L’Rell was the captain of the ship Tyler was rescued from…

Yep, it’s a fair bet that Tyler is Voq. So, the scene I want to see is Tyler meeting Lorca’s pet tribble…