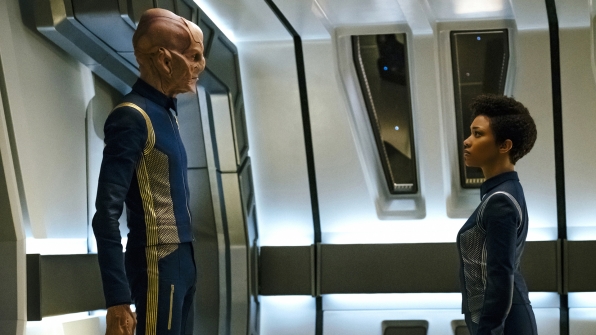 Star Trek: Discovery’s “Choose Your Pain” and is the strongest episode that we have seen since part one of the pilot.

This week, the role of captain takes center stage. Captain Lorca, while en route back to Discovery from a meeting with Star Fleet, is captured by the Klingons. They’ve figured out the Federation has secret new tech, they want it, and they figure interrogating the captain of the Discovery is the key to getting it.

Commander Saru, now acting-captain, plans to locate and rescue Lorca, but his plan involves multiple rapid jumps throughout Klingon territory. Burnham warns him this could leave the tardigrade that powers the spore drive injured or dead. Saru counters that Lorca’s rescue is the priority and he orders Burnham to drop the issue.

In the end, both captains, working separately, contribute to the ultimate rescue of Lorca. We the audience learn a lot about our good ship and crew — and a few other folks — along the way.

The deal with Lorca

We learn from Harry Mudd (Rainn Wilson), one of Lorca’s fellow prisoners, that Lorca is the only survivor of his last command. Lorca clarifies that he chose to blow up his ship in order to save his crew from being taken to a Klingon prison planet and slowly tortured to death. This confession explains much about what we have seen of him so far. Knowing he did the right thing doesn’t keep Lorca from feeling guilty about it, and he chooses to suffer the pain of his damaged eyes as a kind of tribute to the crew he lost. This, and his rescue of another imprisoned Star Fleet officer, Lt. Ash Tyler, makes him seem more like the traditional Star Trek captain we are used to.

The deal with Saru and Burnham

Saru projects a confident demeanor to the crew but in private is riddled with doubts about his ability to captain a vessel. In his desperation for instruction, he has the computer evaluate his performance by comparing his traits and actions to those of Star Fleet’s best captains. In a great bit of writing, Saru’s instincts as a prey species manifest as his ability to quickly identify the Klingon raider being piloted by Lorca while escaping the Klingon raiders pursuing him, resulting in his rescue. Saru later deletes the computer program, never having used it, perhaps realizing that each captain brings something different to the role.

After Lorca’s rescue, Saru tells Burnham that he had resented her for, by causing Georgiou’s death, denying him the opportunity to be her first officer and learn from her, but he is over it now. Burnham says that he did well as acting-captain and that Georgiou would be proud of him. She gives him the antique telescope that Georgiou left to her so he can “see the universe as she saw it.” Burnham is truly learning to respect the position of captain. That’s the kind of growth both Sarek and Georgiou hoped for her, I think.

The deal with Stamets and Dr. Culber

Lt. Stamets is the first gay character in the Star Trek universe, and we get to see him and his husband (Lover? Partner? They haven’t said yet), Dr. Hugh Culber (Wilson Cruz), as a couple at the end of the episode. They are standing at the bathroom mirror brushing their teeth together. How domestic! Culber is both proud and worried because Stamets, the quintessential scientist, used himself as a guinea pig by injecting himself with tardigrade DNA. It did allow him to pilot the spore drive himself and save Lorca’s — and the tardigrade’s — life. (Very Marie Curie of him, but given what happened to her ultimately, it is worrisome.) He assures Culber that he is fine, but when Stamets walks away from the mirror, his reflection stays where it is! Shades of the Mirror Universe of Trek lore? We shall see.

The deal with Harry Mudd

In this episode, we get to meet Harry Mudd ten years before Kirk meets him, and he is the same lying con-man. I do wonder, though, about his story, about his beloved Stella. Is he lying for sympathy? Because in ST:TOS, she was a nag and a shrew. In this version, she’s a dream. I assume he will return so maybe we will find out. For now, he is left behind when Lorca and Tyler make their escape as punishment for spying for the Klingons.

Rainn Wilson does a great job reviving Harry. He doesn’t try to copy character actor Roger C. Carmel’s portrayal of the character, yet Harry is easily the same guy — though a bit darker.

The deal with the new crew member

Lt. Ash Tyler was captured after his ship was destroyed during the Battle of the Binary Stars. After assisting Lorca in escaping the prison ship, it looks like the character will be a regular on this series. Given his wartime trauma and his months of captivity and his, ahem, intimacy with the female Klingon captain, his presence is rich with possibility.

Speaking of which, what’s the deal with the Klingon females and Star Fleet males?

Star Fleet men seem to be like catnip to Klingon females. This one was making Klingon whoopee with Lt. Tyler and it seems if Lorca had been up for it, he would have been next. Remember the Duras Sisters and caressing Picard’s bare pate? Yikes! Maybe it’s the uniform. Anyway, she and Tyler had a knock down drag out as he tried to escape, but for Klingon women, that’s foreplay. Anyway, she was left injured, but alive, so we may see her again. Hell hath no fury like a woman scorned. And like the Klingon proverb says, “bortaS bIr jablu’DI’ reH QaQqu’ nay.“ Google it.

The deal with the Ripper, the tardigrade

Now that they don’t need it, and hopefully because of a sense of decency, Saru charges Burnham to save Ripper the tardigrade’s life. Burnham feels it was never meant to be caged. The capture and torture of animals and other forms of life for human’s use have always been no-nos in the Trek universe, so the tardigrade-powered drive seemed antithetical. I was relieved when Burnham and Tilly give Ripper a little “tardie bag” of spores-to-go and pop it out in open space, where it uncurls and shoots off in search of the mushrooms it craves. Yay!

The deal with the F-bomb

While running science experiments, an excited Cadet Tilly blurts out to Burnham and Stamets, “You guys, this is so f*cking cool! Oh, I’m so sorry.” Stamets replies, “No, cadet, it is f*cking cool.”

Thus appears the first F-bomb dropped in a Star Trek series. I actually barely noticed it since it was so naturally and perfectly executed. It made total sense given the situation and the character. But immediately afterward I thought, I hope this is just one of many reasons it can’t air on traditional network TV, because if this is the only reason, CBS is being ridiculous.

All in all, this was the most Star Trek-y of episodes we’ve gotten from Discovery, and I know I’ve said it before but it bears repeating: this is the best first season showing of any of the Star Trek series with the possible exception of ST: Deep Space 9. The only thing really lacking is a sense of ensemble, but that is to be getting stronger every episode. For this, I give “Choose Your Pain” a solid A.