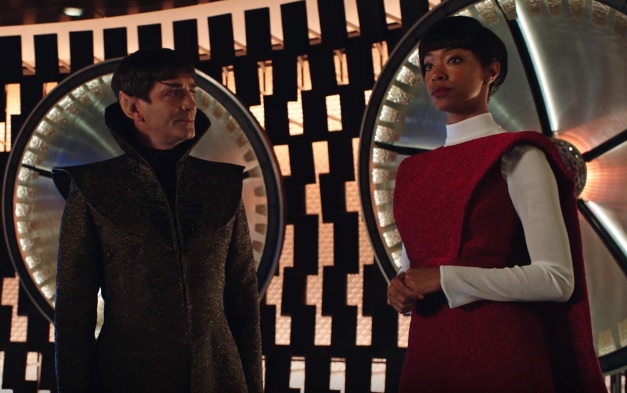 As I’ve stated in my SlashFilm review, I’ve always been a Star Trek fan ever since I watched Star Trek: The Next Generation with my dad about 20 years ago. But while Jean-Luc Picard will always be my favorite Star Trek captain ever (who can say no to Patrick Stewart and the way he commanded with calm authority?), Picard has to battle Spock for the title of favorite Star Trek character ever.

The reason? Because as a half human, half Vulcan, Spock has had to battle his reason with his human emotions, emotions that had the potential to get (and, in the reboot films, has gotten) the best of him. The battle between raging emotions and cold reason is a battle I face constantly. Never did I think Star Trek would continue to crystallize this struggle in such a poignant way, but the franchise succeeded again with Star Trek: Discovery‘s Michael Burnham and her relationship to her father figure (and Spock’s future father) Sarek.

I’ve stated many times on this site and in other publications about how much of my love for Star Trek stems from its ability to showcase varying struggles that exist under the umbrella of “diversity.” Thankfully, the franchise also includes psychological diversity as well, as is the case with the Vulcan race. The Vulcans have stood for many things to many viewers. Some see the Vulcans and their occasional misunderstandings as a way to thoughtfully approach the autism spectrum. Others see the Vulcans as simply uppity living cardboard figures. Speaking personally, the Vulcans have always shown a light on two of my big personal struggles–perfectionism and the highly sensitive (or even empathic) mind.

The running joke my sister and I have is that I’m a Vulcan. In fact, when I said it as self-deprication a few years ago, my sister replied thoughtfully, “You know what? I agree with that.”

I’ve always been a deep thinker, and too many times, that thinking has either gotten me in some type of mental trouble or made me appear as unable to connect with the “normal” outside world. Sometimes, I feel like I can’t connect with the outside world, because I’m so wrapped up in how other people feel, how I feel, and how to best convey those feelings to people who might not have emotions that run as deeply as mine do. As psychiatrist and Emotional Freedom author Judith Orloff accurately described, “It’s like feeling something with 50 fingers as opposed to 10. You have more receptors to feel things.”

Believe it or not, it’s not easy being a feeler, and our Western society makes sure it’s tougher than it has to be. As a society, we value loudness over softness, action over reflection, and doing over being. The stereotypes of a highly sensitive person make us out to be gooey bundles of mush that can’t defend ourselves because we’re supposedly so much weaker than the “average” person. That’s not the case–we aren’t weak. We’re actually quite strong. But you wouldn’t know it from how much emphasis people put on having an extroverted outlook and put down those of us who are reserved within ourselves.

All this leads to is, aside from a smattering of depression, a bad case of perfectionism. I call myself a “recovering perfectionist” now, but for a long time, I’ve been investigating where my perfectionism came from. I’d have to say that there are a lot of reasons for it, but one of them is because I’ve used perfectionism as a bad coping mechanism for the harsh world who can’t handle tears. I grew up comparing myself to others who I thought were better than me simply because they could they naturally handled emotions in a different way than I did. I didn’t realize that the way I handled my emotions was simply my nature–it’s as much an integral part of me as my black skin is. After growing into adulthood I’ve realized that there’s no reason to try to change myself, since my emotions work just like how they’re supposed to work. They are part of the inner strength that help make me a better version of myself each day.

Michael Burnham seems tailor-made for this type of exploration of inner strength. I see in her what I’ve seen in me all the time. I see her struggle to adapt to her Vulcan upbringing and tamp down her human (i.e. emotional) self. I see her struggle to fit in with her Vulcan peers, possibly feeling a lack of self-esteem at not being like the others. I see the shadow of perfectionism that showed itself as cockiness when she first enters the U.S.S. Shenzhou–you can tell she thinks she knows everything about everything because she’s been the first human to graduate from the Vulcan academies and excel amid intense pressure and a stacked deck. I also see her struggle to understand that her humanness–her emotions–is what makes her great.

Her struggle against emotions is also apparent in Sarek and other Vulcans. Big fans of Star Trek know that Vulcans do, in fact, feel. As Memory-Alpha states:

“Contrary to stereotype, Vulcans did possess emotions; indeed, Vulcan emotions were far more intense, violent, and passionate than those of many other species, including even Humans. It was this passionate, explosive emotionality that Vulcans blamed for the vicious cycle of wars which nearly devastated their planet. As such, they focused their mental energies on mastering them.”

Vulcans, including human-born/Vulcan-raised members like Michael and Vulcan-human hybrids like Spock, always suffered from deep-running emotions. Here on planet Earth, there are tons of folks like me who always seem to be drowning in their own emotions, even as we attempt to tamp them down. The actual suffering doesn’t come from the emotions themselves but from the attempt to control them. But if you unleash those emotions, then what? The fear of being out of control in any fashion is what, sadly, keeps the suffering going. It’s the Vulcans’ own fear of a lack of self-control that keeps them perpetuating what is essentially a culture of emotional abuse and intense perfectionism over and over. The aspiration to be the ultimate Vulcan, as it were, is what causes Vulcans to stay at war with themselves.

The Vulcan brain can also be a scary place to be due to their intense emotions. Again, to quote Memory-Alpha:

“The Vulcan brain was described as ‘a puzzle, wrapped inside an enigma, house inside a cranium.’ This had some basis in fact, as the Vulcan brain was composed of many layers…Unlike most humanoid species, traumatic memories were not only psychologically disturbing to Vulcans, but had physical consequences as well. The Vulcan brain, in reordering neural pathways, could literally lobotomize itself.”

The human brain can’t lobotomize itself (although it can block highly traumatic memories from ever reaching the surface), but his description of the Vulcan brain, especially the part about how much of a puzzle it is, fits the highly emotional mind as well. A mind that is constantly drenched in deep emotion is a mind that is a mystery even to itself. The fact that there’s science spearheaded by the leading HSP expert, Dr. Elaine Aron, that show that the highly sensitive person has a hypersensitive wired nervous system and empathy-targeted brain is evidence that the highly sensitive mind is an overactive (and sometimes over-reactive) place. Also, like Vulcans, those who consider themselves highly sensitive or even empathic have extremely strong reactions to events as well as the mundane, due to the fact that–like Vulcans–we can usually sense the emotions of others.

However, with all of this going on, it’s fascinating that Sarek still saw the value in human emotions, so much so that he entrusted his ward to Capt. Georgiou in an attempt to give her the human experiences she never had. It’s also poignant to note that he only shows his true emotions to those closest to him, like when he does his best to hold back a proud smile as he introduces Michael to Georgiou for the first time. Or when he reveals to Michael through their mental connection his regret at not showing her the emotional support she needed throughout her life. His statements are made simply, but you can see the depth of feeling there. You can tell how much he loves Michael and does truly believe in her like any good father would. Like any parent, he’s made mistakes in raising his child, and he’s emotionally intelligent enough to be able to admit that–and his emotional state surrounding this fact–to Michael. As we already know from Star Trek, Sarek sees a lot of admirable qualities in humans, so much so that he married one and had a child. Perhaps it was raising Michael that helped him open his eyes to the importance of having a balance between emotion and reason.

Showing Sarek reveal his emotional side to Michael, and Michael revealing her emotions to Georgiou, brings up another point about highly sensitive people, or at least, someone like me–it’s difficult showing your full self to the public. It’s much easier–and much more intimate–to show the full extent of your emotions to those closest to you, to those who understand you. Not everyone realizes that emotions aren’t there to be played with or used against the person; we highly sensitive people only feel safest revealing ourselves to those who mean the most to us in our lives. Those people have earned the right to know us as we are, and that is a coveted position to hold. In Star Trek terms, it is a coveted position to have a Vulcan as a friend, because they will probably be extremely loyal to you because of the position you hold in their life.

The scene between Sarek and Michael in the mind meld was extremely special for me. It hit home in a way I didn’t expect that scene to do. It made me feel like I finally have someone who understands my personal struggle on television, and she’s also a black woman. It showcases a different side to blackness that is rarely seen on television (so much so that tons of Star Trek fanbros are up in arms over Michael leading the series). She’s not loud or brash. She’s not sexually promiscuous. She’s not even funny, really. She’s a no-nonsense, yet naive woman who is still trying to find herself amid her place between two cultures. She’s ‘a puzzle, wrapped inside an enigma, house inside a cranium,’ and it’s good to see someone like her exist in our pop culture. She lets other black women like me, women with Vulcan brains, know that not only are they just fine, but they can–yes, I’m saying it–live long and prosper. ????????

‘Star Trek: Discovery’ Season One Finale: Well Worth the Wait

‘Star Trek: Discovery’ – Home is Where the War Is