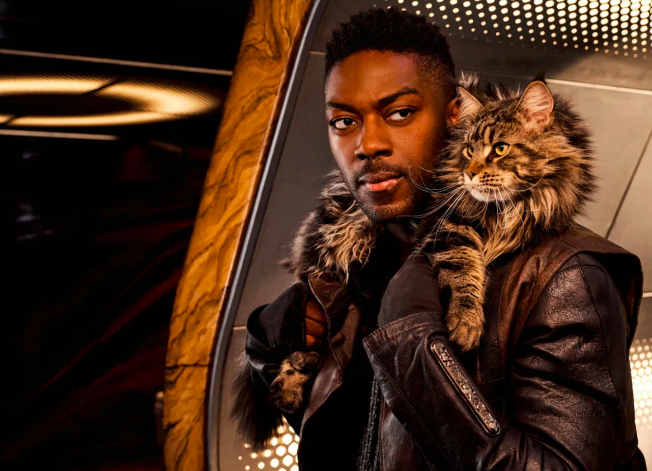 On January 7, 2021, Star Trek: Discovery’s midseason finale “That Hope Is You, Part 2” aired. Nine hundred thirty years in the future, the crew of the USS Discovery has survived the birth of the Borg and have now discovered the origin of and ended the threat from “The Burn.” Among its new allies is Michael Burnham’s first encounter in the 32nd century Cleveland “Book”  Booker, played by David Ajala.

To talk to David Ajala is to instantly become an Ajalaphile. His kindness and humility jump at you from the get go. BGN interviewed Ajala soon after the midseason finale.

So tell us how you came to portray Cleveland Booker on Star Trek: Discovery.

Oh, that came about because very talented individuals, mainly Michelle Paradise and Alex Kurtzman, made this character that they wanted to include for Season 3. This guy was going to be not necessarily the gatekeeper but the introduction of the new world, which is a thousand years into the future. When I was on the phone with Michelle and Alex, and they shared this idea for the character, I came off the phone after hearing them speak about this character with such enthusiasm and excitement thinking, “If I don’t say yes to this, someone else does it, I will cry a little bit.” So I said yes, straight away, and I’m so happy that I did. I really do feel that to work on this show, I’m in the right place at the right time. It’s been an absolute blessing.

What is Booker’s role aboard the USS Discovery?

Cleveland Booker has arrived at a place, in the middle of a season, where he sees the vision and what Starfleet is about irrespective of his preconceived ideas. And he wants to be a part of it. Boing forward, Cleveland Booker is always going to have access to the underworld. That’s going to be beneficial for Starfleet and for the USS Discovery because he’s going to be able to have access in the places that they won’t. Hopefully that collaboration will allow them to just cover more territory and be more successful in the expedition.

Do you think based on that, do you think Book will ever join Starfleet?

Well, he’s not the biggest fan of the uniform because it was too tight, but we can never say never. I think it’s all about purpose. If people have the same purpose, they just need the right avenue to allow that purpose to be realized. It may happen with the USS Discovery and Star fleet, it may happen elsewhere, but I definitely feel that Cleveland Booker and Michael Burnham and USS Discovery are on the same page.

Did you know when you first started that your character was going to be able to pilot the spore drive through the mycelial network?

No, that was a big revelation to me. That was a massive revelation. I had no idea whatsoever. I got the script, read it, and saw. Literally, and I thought, “Oh wow, this is huge.” It just opens up more room and possibilities to really cool storytelling and another feather in Cleveland Booker’s boa in terms of this guy being multitalented and mysteriously equipped with many skills.

What was your first day like on set? Was it surreal?

There we are, Sonequa Martin-Green and myself, and we’re swimming in the blue lagoon during this scene. I remember just having a moment and looking around, thinking, “We’re in the blue lagoon, swimming, and we’re filming the new season of Star Trek: Discovery Season 3, a thousand years into the future. I am blessed.” Wonderful moment.

Your first scene was with Sonequa. What was it like when you got to meet the rest of the cast?

Oh, it was great. I didn’t meet them all at the same time. I met them at just different moments while I was in Toronto just doing the prep. You know, there’s something to be said about when working on a show, when you’re surrounded by really good individuals who just so happen to be really talented. It’s a wonderful thing to be a part of. And I say that not just for the cast, I say that for the crew as well. It is such a blessing to turn up on set and to be surrounded by a wonderful bunch of people, to be working with them, sharing stories, creating stories, having a laugh. It just really makes this project that much more special. Star Trek is all about teamwork, is all about working together and bringing out the best in each other. I definitely feel like a better person when I’m in the presence of the cast members of Star Trek: Discovery.

Was Discovery your first connection with Star Trek? I understand there may be a Shakespeare-inspired intersection with a former Enterprise captain?

What’s his name? Something Stewart? [Laughs.]

Sir Patrick Stewart. Patrick is a wonderful, wonderful, talented individual. I worked with Patrick many years ago, I think it was 2008, at the Royal Shakespeare Company. We did Hamlet. Patrick Stewart was also part of the catalyst of why I ended up watching a bit more Star Trek back in the day. I was familiar with it, but it wasn’t a show that I particularly watched. But then when I would hear how Patrick Stewart would speak so fondly about his experiences working on Star Trek and being part of the franchise, I was just curious to check out some of the episodes. So cut to 2019 for the San Diego Comic-Con. And we’re backstage and I get to see Patrick again. First time in a few years. And it was just a really sweet moment. To be reunited and to be part of the same franchise at the same time, real special blessing. And he welcomed me in with open arms. He’s a gem.

Was San Diego in 2019 your first big Comic-Con or had you done a Comic-Con like that before?

Yes, so I had done a Comic-Con before, but I guess this one was a little different because I did a Comic-Con I think in 2018 with a show called Night Flyers, really cool project to work on. I worked on Supergirl. And now being part of Star Trek. The fan bases of these shows were definitely at the 2019 Comic-Con, so I was more recognizable to people, and that’s what made it different. Before I was able to walk amongst the crowds incognito. But this time around, I was definitely more visible. I was deeply humbled when we stepped on to the stage at the San Diego Comic-Con for the 7,000 Star Trek fans to be welcomed into the franchise. That was definitely a very, very special moment I’ll never forget.

You’ve played roles in major franchises, including the DC Universe, Dr. Who, and Star Trek. Do you have any designs on working on any other star-based war series?

Yeah. And it may happen sooner than you think. I’ll put it this way. There’s a few cool franchises that, schedule permitting, I will be joining.

The pandemic has everyone in a rut. What new habit or talent have you developed while in COVID isolation?

I think my cooking has improved. You know what I like to do, actually? I like to have random ingredients in the fridge, in the cupboard, and put foods together that shouldn’t really go together, but you’re able to do in a way that it just tastes delicious. I made a quiche not to long ago. It was a plantain quiche. So inside the quiche, of course, I sliced delicious pieces of plantain, fried it down, put it in the base of the pastry, and then put the egg in with all the other goodness. I put some salmon on top. I like remixing cultural dishes and putting them together and just creating new things. I’m just kind of artistic like that. And I also love food. I’m greedy. I love food.

You were born in England, which has its own history regarding civil rights. When or what caused to understand what it meant to be a Black man in America?

In the UK we’re still exposed to a lot of American culture and American news. So, race-related issues are very similar, but then there are nuances that are slightly different, which I totally respect and understand. Because of technology, we’ve been exposed to a lot more wrongdoing in the world when it comes to race-related issues. And the spotlight has been on America for a while, and we’ve seen these issues and these issues have been happening for many, many years. And it’s been very, very tough to see.

I stand as the person who’s always going to make the effort towards contributing towards healing and to not contribute towards anyone’s oppression. I also understand that it’s a group effort, a collective effort to do better. The more invested we are to make this world a better place, the better experience we’ll have as citizens on Earth.

Can you tell us anything about what to expect on Star Trek: Discovery?

What to expect? I think going forward, I think that of course there’ll be more, a deep level of storytelling. Things have shifted drastically. Michael Burnham is now the captain. She’s grown so much, she’s proved herself, not that she needed to, but she’s proved herself. And now she has many allies. I’m really excited to see the storytelling progress and for more character development to happen.

If you watch Star Trek: Discovery, it is clear that a major part of Booker’s life, his cat Grudge, was not explored, but there is always next time. The date for the next episode of Star Trek: Discovery has not been released, but if you missed it the mid-season finale is available on CBS All Access.

‘Star Trek: Discovery’ Season One Finale: Well Worth the Wait

‘Star Trek: Discovery’ – Home is Where the War Is

Open Your Eyes for a Big Surprise on ‘Star Trek: Discovery’