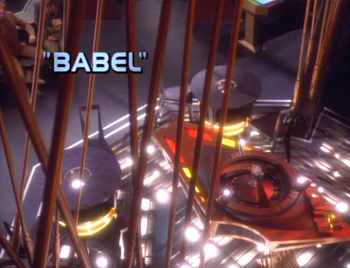 Bajoran terrorism strikes again! Yes, this time I’m coming out swinging for the fences.  By the end of my run on DS9, my hope is that you will be just as skeptical of the Federation and the Bajorans because no one is 100% innocent or altruistic. Miss me with that but, I digress. 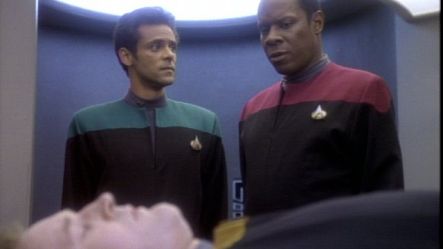 The episode starts innocuously enough with Chief Miles O’Brien as he scrambles to take care of the station, originally a Cardassian mining station. As we quickly see, he doesn’t get a moment’s rest from people trapped in an airlock to docking clamps that are malfunctioning to food replicators on the fritz. In the process of fixing the replicators, he unknowingly trips a Bajoran device that releases an engineered virus into the food. People start demonstrating signs of aphasia, an inability to understand or express speech. Eventually, people start dropping like flies including O’Brien, Lieutenant Dax, Jake, and eventually Commander Sisko. Major Kira is on a mission to find the creator of the virus and create an antidote.

The stakes are high on this one. 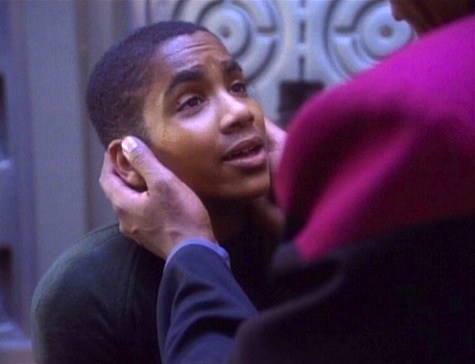 What I found most striking was how the episode harkens back to the pilot. Although we may not see much of the father/son relationship between Sisko and Jake, this episode reminds us that Jake is the most important person to Sisko. Jake is all he has and he does not, scratch that, will not lose him. It’s great to get these moments of realness that indicate there is more to each character than being in Starfleet. Speaking along those same lines, O’Brien is the initial focus of the episode but we don’t ever see him with his family. Or, how they react to the news that he is ill. They spend much of their time, like most family members on Star Trek, off screen. They are trotted on screen when it is important to the plot.

Let’s talk about this virus. One thing that bothered me, besides the Bajoran terrorism, is why Dr. Bashir did not think to create an antidote from Odo and Quark. They are the only two characters who went unscathed by the virus. Many an outbreak film has taught me this bit of information. Also, a little Internet searching led me to discover that this episode came out a few weeks after the infamous 1993 E.coli outbreak at Jack-in-the-Box fast food joints. Over 700 people were hospitalized. Majority of the victims were under the age of 10. I was nine years old at the time. I distinctly remember this incident because my parents were “shooketh.” We didn’t eat at a fast food joint for a hot minute as a result. The parallels between the E.coli outbreak and this episode are timely and eerie.

This is the first episode, I think, that doesn’t feel intellectually or morally weighty. Despite being filled with high stakes, it has a different feel to it from the previous episodes. It wraps up neatly in the 47-odd minutes of airtime. To put it mildly, this feels like a Star Trek episode in the vein of The Next Generation and The Original Series.