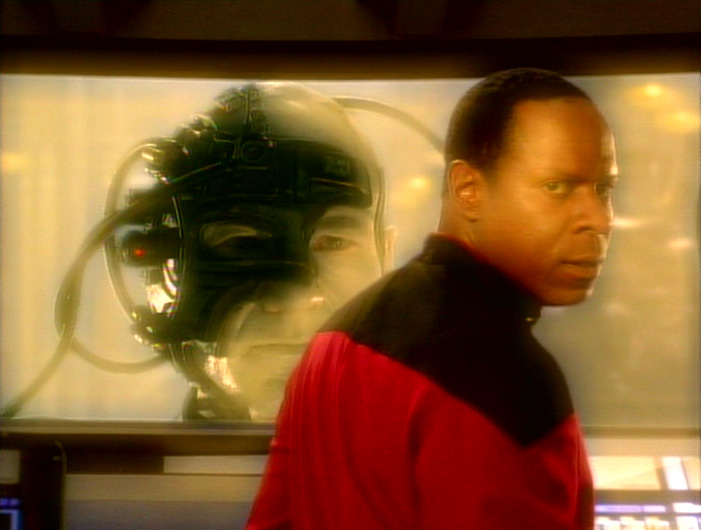 The opening sequence of Emissary Part 1 and 2, the pilot episode of Star Trek: Deep Space Nine (DS9), comes out swinging. It starts with an infamous battle of Star Trek lore: Wolf 359. This is the battle in which Starfleet captain-turned-Borg puppet Jean-Luc Picard goes toe-to-toe with a small fleet of starships which culminates in destruction and loss of life for Starfleet.

But this is not Picard’s story. This is Commander Benjamin Sisko’s story. Wolf 359 will, as the show progresses, be a defining moment of his life. It is at Wolf 359 he loses his wife. Sisko, his son, and others barely escape with their lives. It is the shadow that hangs over him.

At a whopping 90 minutes, Emissary is a heck of a pilot episode, originally airing on January 3, 1993. The opening sequence establishes Sisko but also links DS9 to the existing Star Trek universe. DS9 exists at the same time as Star Trek: Next Generation (TNS). This is evident by the presence of the USS Enterprise and Picard.

The episode brings with it some major themes that carry throughout not only this episode but will carry out, to some degree or another, for the run of the show. Spoiler alert: I watched DS9 as a kid and now watching again as an adult.

Where Star Trek differed is that it introduced loss. Our first introduction to Jennifer Sisko is her untimely death. But, it is Sisko’s behavior when faced with that death and his grief that shows us how profound his love is for her. In the latter half of the episode, we discover that her death haunts his dreams. Now, I love me some black love. And, it was great to see the highlight reel of Benjamin and Jennifer’s life, even if it was an alien illusion. Admittedly, I felt she got shortchanged as a character. Another victim of that all-too-common plot device: fridging. Her life and who she was reduced to her death, specifically how that death impacted Sisko. Another black woman’s voice silenced before she has a chance to speak. 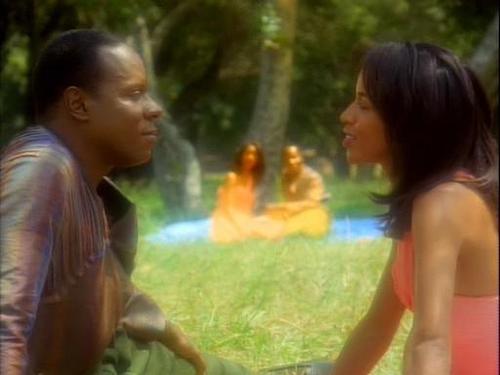 The Cardassians oppressed Bajor for over 60 years. And, as stated by Major Kira Nerys, Sisko’s Bajoran liaison to the new Bajoran Provisional Government, they fought as hard as they could against their oppressors. Nerys barely hides her disdain for the Federation in her first meeting with Sisko. He replies that the Federation is here to help. Nerys counters so did the Cardassians. That made me wonder: Isn’t the Federation just another colonizing force?

The Cardassians ruled with an iron fist and exploited the resources of Bajor. Now, the Federation has come into dole out humanitarian aid. I couldn’t help but draw parallels to the history of Africa. From being exploited to having humanitarian aid that really begs the question of whether it truly helps those in need.

The irony was not lost on me of a Bajoran (albeit white woman) schooling a black man on her struggles to fight oppression. Later, in the episode, she snarkily remarks that Sisko probably never got his hands dirty. Hold up, lady. Her statement is predicated on accepting that mankind has evolved beyond racism AND that she was unaware of Earth’s history but still. Her exchanges had me feeling a type of way. 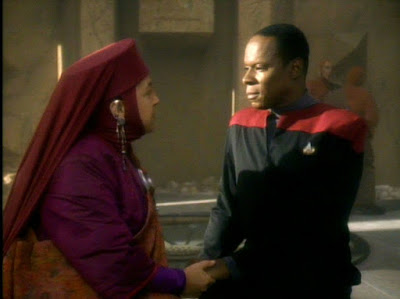 Other items of note in the episode:

Thanks for reading. Next time, we’ll explore Episode Two: A Man Alone.

Star Trek Redux is a bi-monthly examination of the themes, messages, and morals of the Star Trek Universe.