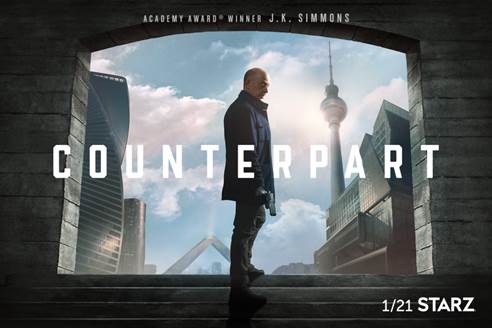 I am a fan of the slow burn. I don’t care if it’s romance or mystery, if there’s tension in the air and unanswered questions, I am there. Counterpart premieres January 21st, 2018 on Starz and If I were to use one word to describe how I feel about Counterpart, it would be perplexed.

Counterpart stars J.K. Simmons (from the great show Oz) who plays Howard Silk, a quiet, simple man that just wants to take care of his wife and advance in the company he’s worked for for 30 years. Howard is eventually thrust into the secret world his company harbors where he meets his “Other Side” counterpart Howard or as I call him, H2. So here are 4 positives and 1 negatives.

Women assassins are not necessarily hard to find, but it can be hard to find one right. I am intrigued by Baldwin (Sara Serraiocco) even though we don’t know much about her besides the fact that she is from the Other Side and is part of a faction that’s trying to take over. She’s highly methodical and is a clear professional — as one difference in routine can set off her radar. I am interested in seeing what the show does with her as there’s a reputation for TV shows to write a strong female character and later screw her up.

As I mentioned before, we are introduced to the Other Side (OS) fairly quickly. We learn that there is a faction on the OS that is trying to take over and H2 is part of the team trying to keep them from their task. What I want to know is: which side is the bad side? So far we see Baldwin shoot “innocent” people, but from what I know of history and current events, the side that is rebelling generally has a good reason to.

I’ve also noticed remarkable differences between the OS and the real world that make me question what events caused both sides to branch off. We know the OS was discovered during the Cold War so are we talking a Fallout style branching off? I’m not sure, but I do know I can’t wait to find out.

If you like one J.K. Simmons, you’ll like two of them. Even though both characters are worlds apart (get it), J.K. does a great job of differentiating the two. H1 is mild-mannered and his life reminds me of Monsters Inc and the game The Stanley Parable. In the game, the protagonist Stanley works in an office building, tasked to monitor data coming on a computer screen and press buttons appropriately without question which is generally what H1’s job is. H2, on the other hand, is confident, bold, and a bit scary. Going forward, I am interested in seeing other people’s counterparts and if they are as different from each other as the Howards are.

Along with J.K. Simmons, there is a plethora of top talent. Olivia Williams (from The Sixth Sense) plays Howard’s wife Emily and we get to see her counterparts who seem to be as different from each other as the Howards are. Harry Lloyd (Viserys from Game of Thrones) plays H1’s dickhead boss. I mean dude knows how to play a jerk really well.

I would be remiss in my duties as a Black Girl Nerds writer to not say the obvious: Where are all the Black people? In the trailer, I see two Black men, but very few people in the billing are people of color and none are Black women.

After seeing the first episode, I have a plethora of questions which is not a bad thing. I get excited when I’m not sure what’s going on in a TV show and I am looking forward to what Starz will give us. Of course, I hope that Black female characters show up at some point, though I’m not hopeful for this season.

Overall, I am looking forward to finding out more information and what is really going on with the Other Side. For those that missed it, here is the current trailer for Counterpart.