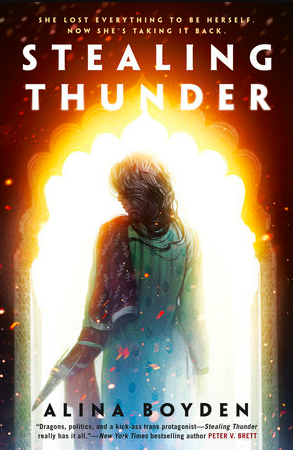 There is nothing I appreciate more these days than having an ever-expanding bookshelf full of queer lit — especially when it’s delving into fantasy territory. After all, who isn’t looking for a little escapism these days?

Thankfully, Alina Boyden has provided all that and more in her latest work Stealing Thunder. Sex, war, political intrigue, and a healthy dose of mythical creatures are all wrapped beautifully in a blue, pink, and white flag. So for those looking for an adult fantasy to distract from the current world order, and a trans romance that isn’t absolutely drowning in violence and tragedy, Razia’s story is the one for you.

By day Razia is one of the most graceful and alluring dancers in the desert city of Bikampur, seducing wealthy men to pay her way through life. But at night she sneaks out from their beds to steal their valuables. Risking her life in the process, she brings all the treasures to Ammi, her guru and caretaker of hijras (trans girls) like Razia who escaped their families to live true and authentic lives. Although she is grateful to have a home with sisters she loves dearly, Razia knows her life is a balancing act that could topple over at a moment’s notice.

And that’s to say nothing of her former life as the crown prince of the richest and most feared kingdom in the land. Razia longs to forget her past and leave behind the fear that her father’s assassins will one day find her. But there is one thing from home that she longs for more than anything else — Sultana, her prized and cherished zahhak, an enormous bird-like beast she flew fearlessly through the skies during her time as a member of the royal family. Although she more often than not failed to live up to her father’s expectations as a prince, in the air with Sultana she was fearsome and skilled in a way no one could doubt. But those days have long since passed.

This all changes when she meets Prince Arjun, her latest client and a zahhak rider with a fiery mount of his own. For the first time in years, Razia gets a taste of all she’s been missing and more. He seems completely enamored with her, regardless of her status as a hijra. Despite her best efforts, she can’t seem to help returning his affections in a way that goes beyond her job as a courtesan. She’s full to bursting with secrets, and any one of them could spell the end of her love affair with this seemingly perfect man. With her life constantly hanging in the balance, she must rely on every skill she’s ever learned and more to make it through in one piece and keep the people she loves safe in the process.

This book was gripping from beginning to end. Boyden establishes clear and compelling stakes from the very start that kept the narrative flowing perfectly. She artfully sidesteps many of the tropes inherent to storylines of secrecy and royal intrigue. There were times when I was sure I knew where the story was going, only for it to gracefully skip over all the overused plot devices I found myself dreading.

Boyden’s writing hit all the right beats for fans of romance, fantasy, and intrigue. Often sensual, although nothing I would describe as graphic, the attraction between the main characters is well developed and believable. This extends beyond the romance as well. Razia’s place in society and how it impacts her encounters with other characters was definitely the most strongly written element of the story. Having based a lot of her writing on experiences and knowledge gathered from living in trans communities in South Asia, Boyden takes immense care in the presentation of every detail. I’m sure there are many elements that I could not fully appreciate as a cis reader, but I found Razia’s emotion, motivation, and identity struggles resoundingly authentic.

One thing that I would be remiss not to mention is that there are references to sexual assault in  this book that some readers might find triggering. As I mentioned before, the novel does avoid being overly graphic, and it doesn’t dwell heavily in trauma. But the pieces are still there, and Boyden’s development of the relationships around that point are…interesting, to say the least. It was a vastly different perspective than I am used to reading on the subject. Regardless, it kept me thinking and invited the chance to strongly consider ideas that I never had before.

In Razia you will find a heroine that is beautiful, strong, trustworthy, and above all resilient. Hers is a story worth reading no matter where you lie on the gender spectrum.

Stealing Thunder is available for purchase May 12, 2020.