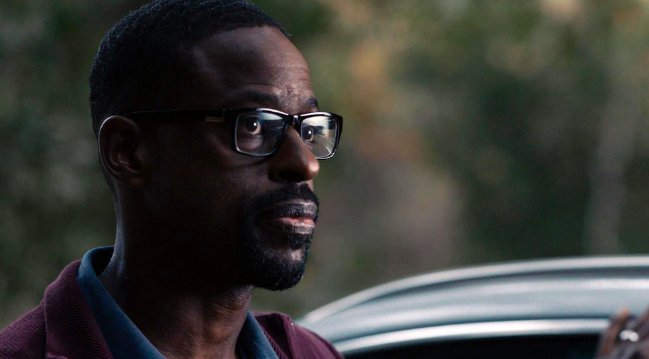 NBC’s family-drama This Is Us made an impactful return Tuesday night, as fans tuned in to the two-hour season premiere. With the same feel-good background music and thought-provoking dialogue, the show picked up right where it left off. Except this time, the Pearson family was in the middle of a global pandemic and national unrest, as millions were protesting police brutality.

Fans were taken back in time to the beginning of the year when news first began breaking about the COVID-19 pandemic and the tragic killing of George Floyd. The Season 5 premiere featured Randall Pearson (Sterling K. Brown) navigating his 40th birthday in the middle of several personal and global crises.

As millions tuned in and live-tweeted about the episode, viewers saw Brown’s character in a whole new light as he was at his breaking point of exhaustion, having dealt with racism alone growing up adopted in a white family. With his sister Kate Pearson (Chrissy Metz ) and other family members speaking to him about racism for the first time in 40 years, it was a surreal experience for Black viewers who related to Randall Pearson’s feelings of isolation and exhaustion.

Some were shocked to see the writers of the show incorporate the pandemic and social injustice into the storyline. But the show has never shied away from tackling current events and real-life scenarios in its story. The cast of the show continues to authentically and wholeheartedly portray tough situations on screen in a compelling and moving way.

At a group interview to promote Season 5, BGN got to ask for more details from Brown about his character and portrayal.

The show has always talked about race. The Season 5 premiere, however, touched on it in a whole new way. In our current political climate, do you feel more of a responsibility in portraying Randall Pearson, who represents a strong, Black man navigating through his own situations?

I’ll just say, I think it would have been tone deaf for us to not address the climate, given the fact that you have these two characters [Randall and Beth Pearson] front and center in the show. Much of the past six/seven months has to do with Black folks finding themselves under siege on multiple fronts. The idea that you wouldn’t talk about it just seems unrealistic and not really doing the character justice. So I don’t feel any more pressure than anything that I’ve had in seasons past, but the world and the perception of the world has been heightened in such a way that it was an opportunity for us to take advantage. It would have been irresponsible for Randall to just be like, “Ah, it’s my birthday, I’m so happy.” You know what I’m saying? My birthday happened in April, and I was like, “This is a shitty birthday, man. This is not great. I don’t feel so good right now.” So I think we just tried to be a reflection of the world that we’re living in right now. And that’s the world we live in.

Viewers could relate to Brown’s character in last night’s episode, as Randall Pearson honestly didn’t have all the answers on how to process what he was feeling as a Black man in 2020. Fans really connected to Beth Pearson’s [Susan Watson] final monologue in the episode as her words gave reassurance and strength to Randall. “This pain is not forever. This moment in time is not forever. Nothing is forever except us. We fight on,” Beth said. Her final words gave a sense of peace not only to Randall but viewers as well, as it assured fans that the family would find their way as they always do, in the right timing.

When the show first aired in 2016, viewers were just beginning to figure out the intricacies of Randall Pearson’s personality. As the story unfolds each episode, it becomes easier for fans to understand why Randall is the way he is. For the past five seasons, Randall has dealt with anxiety and other mental health issues. But his choice to leave his white, female therapist and work instead with a Black therapist in the Season 5 premiere shows that he is one step closer on the path to fully healing from the trauma his life has dealt him. As his personal life and the world continues to throw new and old obstacles his way, fans can count on seeing Randall overcoming them the same way as before: genuinely and with grit.

You can catch NBC’s This Is Us on Tuesday nights at 9/8C.