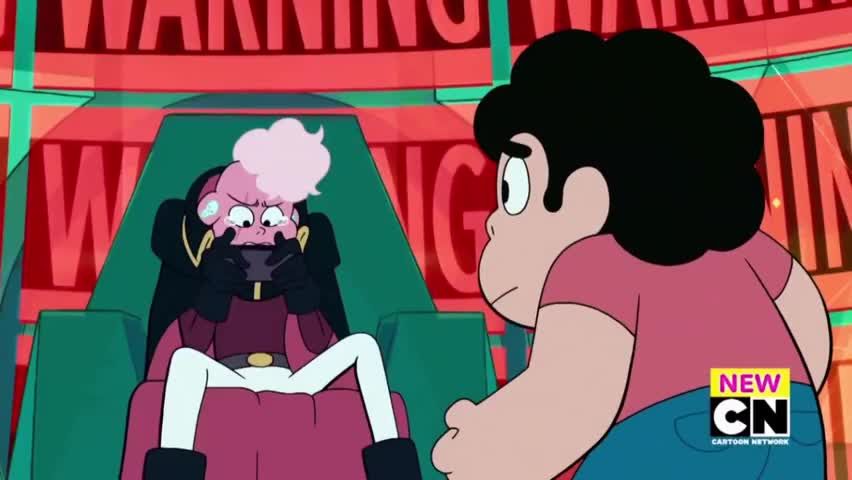 Lars is back on ‘Steven Universe,’ ya’ll. Sigh.

The episode opens with Connie and Steven getting ready to head down to visit Lars with a care package from his parents. Evidently, everyone has taken his disappearance pretty well, with Connie coming along mainly because she wants to finally go on a space adventure with Steven. He warns her that Lars is in a pretty sticky situation, being trapped on Homeworld with fugitive Gems, so this might not exactly be a fun trip.

But when they pop out of the portal that’s in Lars’s head, they see something totally different. Lars has stolen a snazzy ship from the Homeworld army, is Captain and leader of the off-color Gems, and is dressed like a mixture of a sea captain and a bad guy in an early 90’s anime. Evidently, he’s spent his time pulling steadily growing guerilla attacks on Homeworld, leading to his latest attack, stealing this ship, which he plans on using to fly back to Earth. Connie and Steven watch him taunt a Homeworld Gem through a communication screen as they fly away, and they, as I, are amazed by his transformation. It’s the most confident (and competent) we’ve ever seen him.

Steven and Connie show him the care package his parents sent him, and he’s touched by it, and hesitatingly asks about Sadie. Steven excitedly tells him she’s doing great and goes on about the positive changes Sadie’s made in the previous episode, showing him pictures of her band. Lars isn’t pleased. And as a Homeworld battleship approaches (led by the Gem he had shit talked earlier), Lars pays no attention to it or his off-color Gems trying to get his attention; instead, he stares at the pictures and screams, “How’s she having such a good time without me??” He even goes so far as to say she started a band with the cool kids just to spite him, because he’d wanted to befriend them for so long while he was on Earth.

And just when I was starting to think, “hey, he’s not so bad.” See, Lars can’t go 15 minutes without reverting back to his worst self, throwing a tantrum about someone else’s happiness. He’s living his life, doing surprisingly well for himself, but he finds out Sadie isn’t sobbing herself to sleep every night and he gets upset enough to ignore the impending battle starting to happen around him?? Good Lord, I hate that boy.

Thankfully, Connie and Steven have no time for this foolishness and they check the hell out of him, enough for Lars to snap out of it and deal with the Homeworld ship trying to take them out. And Lars, once taking charge, performs admirably, but at this point, they’re cornered. Steven and Connie transform as Stevonnie to help, hopping into an experimental fighter jet to take out the battleship’s weapons, which works, but they get hit by a missile and crash land on an unknown planet, where the episode ends.

Something that wouldn’t have happened had Lars been paying enough attention earlier for them to notice the battleship coming and evade capture, but whatever, right? Sigh.

Stevonnie: “Captain Lars, permission to go in your place! If it’s anything like driving a car, I should be fine.”