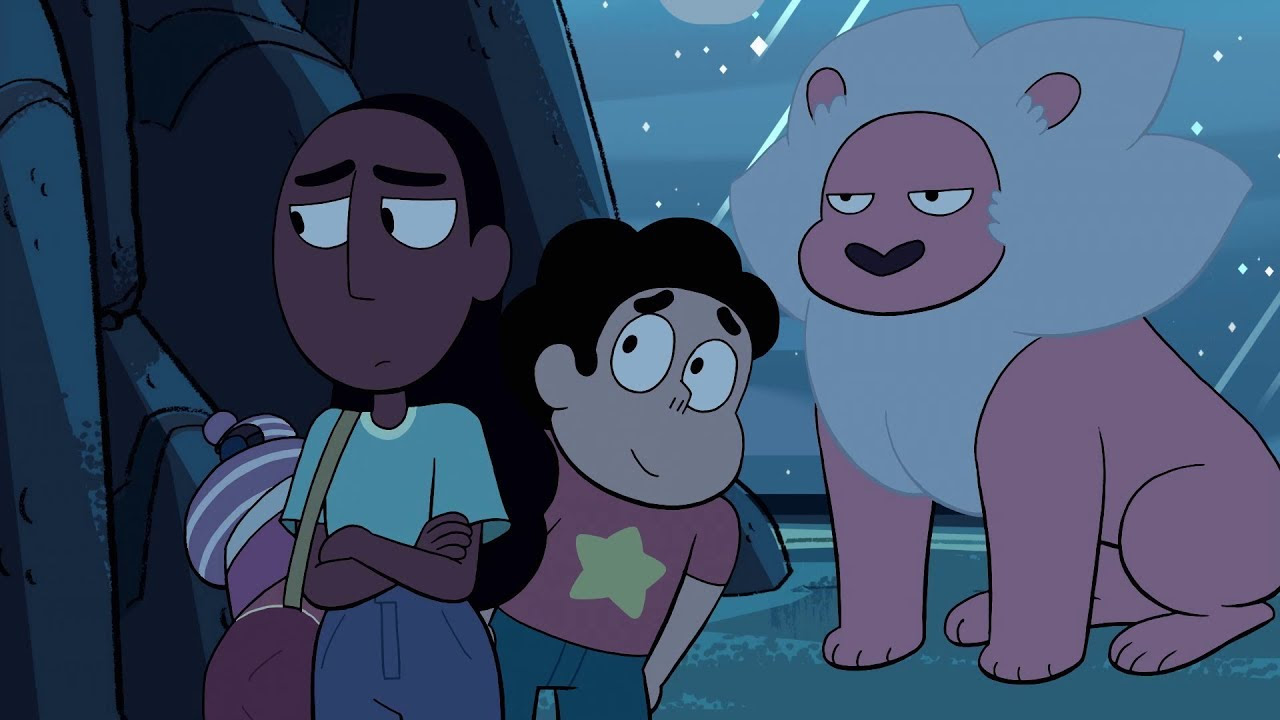 Steven Universe is back, ya’ll!! And with quite a bang. We’re thrown right into the aftermath of the epic space adventure that ended with “Lar’s Head,” with barely a moment to breathe, which frankly is just the way I like my television, thank you very much.

This episode starts off essentially right where “Lar’s Head” ended, with Steven volunteering to walk Connie home. He excitedly begins to go into what happened at Homeworld, and starts to realize Connie’s not into it. She tells him she’s upset that he was so quick to sacrifice himself without considering any other options, for example fusing with her and becoming Stevonnie. “We could have done it together!” she cries. Confused, Steven states that since this was all his fault, it was up to him to fix it, no matter what would happen to him, which of course angers Connie. She tells him “you don’t get it,” and rides off with Lion alone. Steven is annoyed that this is his homecoming instead of the hero’s welcome he imagined, but he doesn’t push it and lets her ride off.

The next day, he finds Sadie at the donut shop to let her know Lars’s fate. She’s, of course, upset but happy to know her bae’s alive and reminds Steven that they should tell Lars’s parents. While doing so they come across a rally that Nanefua, the grandmother of Kiki and Jenny, is throwing. She and the rest of the townspeople are furious about the alien abductions that happened earlier in the season and the Mayor’s seeming incompetence in the matter, and she wants to run against him in the upcoming election and lead the town herself. Steven, feeling guilty because he had inadvertently caused the abductions himself, takes it upon himself to call a town meeting with the Mayor and explain that they were his fault and had nothing to do with the Mayor.

The meeting doesn’t go well. Mayor Dewey gets hit in the face with a tomato and that video goes viral and Steven, feeling even guiltier now, decides to spend all night prepping him for the debate the next day. Steven believes that together they can sway the crowd in their favor, and at first, it’s working. Mayor Dewey gets the audience to understand that he’s blamed for all the problems in Beach City and it takes a strong person to put all that on their shoulders and still run the town. Then Nanefua has her turn to speak, and shockingly admits that he’s right. Instead of pointing fingers, everyone needs to take on the responsibility and welfare of Beach City together. She gets a standing ovation, and Mayor Dewey realizes she’s the better person for the job and resigns on the spot.

Steven gets super upset by this turn of events and wants to know why Dewey dropped out without so much a fight, after all the work they had done to get this far. Dewey tries to explain that there’s no point, and “what do you want me to say?” Steven starts to go into how betrayed he feels and has the sudden realization that this is exactly how Connie felt. He finally understands how he messed up with her and keeps trying to call her, but she doesn’t pick up. He’s left staring at his phone as the consequences of his actions finally start to sink in. Roll credits.

That’s right, they didn’t make up by the end of the episode. Therein lies the brilliance of Steven Universe. Because this show understands the concept of consequence better than any animated show I’ve ever seen, the fallout of his recent space adventure might be deeper than we thought. I personally hope Connie’s anger doesn’t last too long, but if it does, Steven does kind of deserve it.

Mayor Dewey: “Aww shucks, Universe. You’re like the son I never had.”

Mayor Dewey: “I know that! You’re just very different from him, is all.”