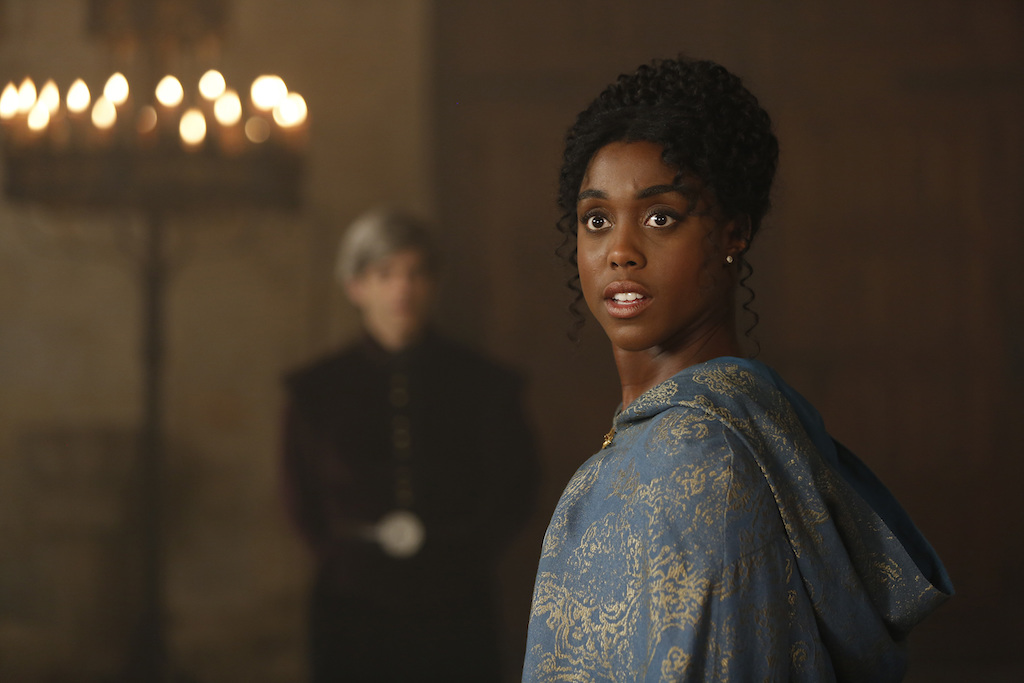 Maybe it was the mini hiatus or Still Star-Crossed’s cancellation, but I wasn’t much looking forward to “Pluck Out the Heart of My Mystery.” The previous episode had its moments but wasn’t as strong as I wanted, but this one pretty much confirms that, despite how annoying it may be, this show’s cancellation isn’t unwarranted. But it should be a much better final product than it is, with so many experienced people (including Shonda Rhimes and Betsy Beers) behind the scenes. But my biggest question about the show is why it’s trying to cram so much story into a mere seven episodes?

Still Star-Crossed would have benefitted from going the same straightforward route as the source material, but it’s being weighed down by dull subplots.  The central arc of Rosaline and Benvolio reluctantly partnering to figure out who’s attacking their families is being overtaken by weaker plots like Escalus and Isabella’s efforts to avoid conflict with Venice, Lady Capulet’s determined hatred of Rosaline, and the arrival of Tessa Montague. The only thing that manages to be even somewhat interesting is the cold open, as a cat snoops around Juliet’s bedroom/shrine, knocking over a vial of poison and drinking it. Later, this same cat reawakens and leaps out of its grave as if nothing ever happened.

But that’s where the intrigue in this episode begins and ends because the rest of the episode is pretty set on sapping any and all tension. Unfortunately, the show’s not quite smart enough to lean into the conspiracies and entrapments like it wants to, so its attempts often fall flat.

Take Rosaline and Benvolio’s investigation which leads them to Grimio Capulet and a masked swordsman who kills Grimio and pins his murder on Benvolio. This isn’t CSI: Verona, so I don’t expect any murder investigation to be as thorough as we’ve grown accustomed to on our TV, but I can’t fathom how anyone is so quick to take the word of a single witness against another single witness. Especially when that one witness is a common woman (let’s be real, no one would have listened to or believed her testimony against a noble) who didn’t even see the actual killing happen. Granted, we already know Escalus isn’t big on investigations himself with the whole “executions without a trial” thing, but….really?

I can’t fault the show for wanting to pick up the pace when it only has a little more time to finish up, but that’s no excuse for being so sloppy about it. After becoming Verona’s Most Wanted, Benvolio plans to leave with his sex worker friend. Listening to him profess his love for her is cringeworthy enough, because I can’t fathom why he feels that way, but it’s a relief when she turns him in instead. Why would she, paid to be in his company, want to take off with him for an uncertain life on the run? But I appreciate her pointing out to him that he’s a client and like all the rest, is of course in love with her. It’s not a good look for Benvolio, thinking that he’s so singularly charming as to convince a woman that he’s her one and only, but Benvolio’s clearly hard up for friends and acquaintances.

So I get why he goes from “hating” Rosaline to standing outside her window asking her to run away with him and find the truth. Of course, he’d be convinced of Rosaline’s innate goodness after learning of her father’s murder and how much she despises the cyclical nature of all their feuding. But I’m not as sold as Rosaline’s trust in him since Benvolio didn’t get much of an opportunity this week to present a different side of himself like she did. But then again, Rosaline is a good person so… of course she wants to clear Benvolio’s name and find out who’s really behind everything. Who knows how long it’ll take them to figure it out but since we already know the answer it’s not going to as interesting as it should be.

It’s not a shock that Paris and Lady Capulet are working together to wreak havoc, but it’s still disappointing to have it laid out so soon.The book at least attempted to create an engaging mystery (not that it did a very good job, if you ask me), but the show was quick to abandon it. Not only does Lady Capulet spends the whole episode seething (it was a lot this week), but we get a single scene of Paris not in villain mode and he’s far too transparent in his questioning of Livia to not be up to something. Would it have been too much to ask that we get to play around with more clues and questions before having it solved for us?

At least the episode’s title is well earned. The heart of the mystery has indeed been plucked.