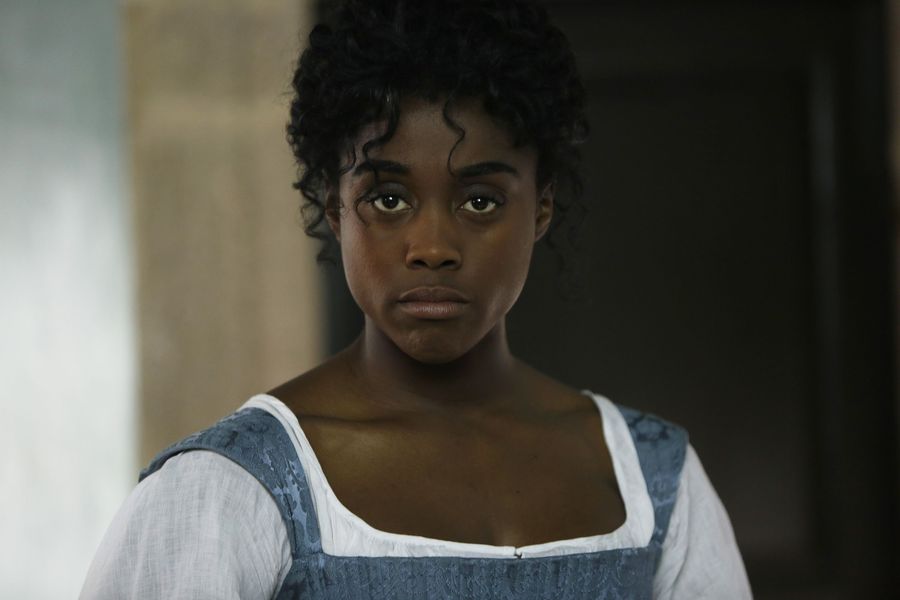 Do you remember the Cinderella adaptation with Brandy, Whitney Houston, and Whoopi Goldberg? The one where Bernadette Peters was the evil stepmother, and Whoopi and Victor Garber somehow produced Paolo Montalban? I mention it because Still-Star Crossed, the newest show from Shondaland, gave me major black Cinderella vibes. Its colorful cast, the inexplicable family relations between people of various races, the fairytale atmosphere that makes you think surely someone’s about to burst into song, and of course, its charming leading Lady Rosaline Capulet.

Unlike Cinderella, Rosaline is practical and unromantic. She’s Elizabeth Bennet but (way) slower to laugh. Though she follows along with cousin Juliet’s scheme to marry Romeo, and later feign death, she does so disapprovingly. Unlike Juliet and her romantically-inclined sister, Rosaline would never be mistaken for one of Shakespeare’s more fatalistic heroines. In the play, Rosaline went unseen, her only defining character trait being her indifference to Romeo. While there’s no indication this Romeo ever had a thing for Rosaline you can easily see her rejecting him. Because our Rosaline has plans of entering a convent (yes, really), placing a higher value on her independence than a beneficial marriage. Not that she has many prospects now that her social status is in the toilet after her parents are murdered (by Montagues, of course) and she and her sister work as servants in their aunt and uncle’s home. Lashana Lynch is immediately likable as Rosaline, all the more to make us buy what we know to be her centerpiece in a Shakespearean love triangle.

The rest of the cast is equally well-suited to their roles, at least so far.

Zuleikha Robinson plays Lady Capulet with frank and delicious villainy, and Grant Bowler’s Lord Montague’s shady calculations promise real trouble for our heroes. Wade Briggs (looking, in a good way, like a Bachelorette contestant) is the idealistic Benvolio, fresh from breaking off an engagement with her a girl he wasn’t in love with. We don’t get much of Torrance Coombs as Paris, Juliet’s jilted wannabe-lover, but he’s very used to the period, courtly-esque dramas after roles on Reign and The Tudors, and he’s gonna get out of that sickbed at some point.

But the most intriguing is Sterling Sulieman as Escalus, who ascends to the throne after his father (the King) dies. The last time I saw Sulieman it was on Pretty Little Liars where he was creepy and later revealed to be a murderer. He’s far more charming here as a kind but pragmatic Escalus, trying to find a way to keep Verona from sinking beneath the weight of the Capulet/Montague feud as well as looking out for Verona’s wider-world interests.

Adding the monarchy into the feud is a nice way of expanding the scope. It’s briefly mentioned that one or both families would happily make a play for the crown if they could get it, which ups the stakes from an extended blood feud. To be fair the stakes are all high already, as there’s plenty of murder (RIP Mercutio, RIP Tybalt) and riots overtake the city as those who have pledged allegiance to the Capulets and Montagues clash in the streets after Romeo and Juliet’s funeral — but it’s always more fun when there’s a crown involved isn’t there?

But first things first: to quell the violence, Escalus arranges a marriage between the woman he’s in love with (Rosaline) and her sworn enemy (Benvolio). Escalus and Rosaline have a tortured and teary past to fall back on, bolstered by the social impossibility of a king being with a servant. And Rosaline and Benvolio have a delicious sort of hate that’ll get really good when it finally turns into something more. Obviously, it’s too early to say which way the wind will blow, but even this first taste, of Escalus and Rosaline kissing while a nosy Benvolio watches, is fun and frothy.

The same is true of the rest of the show. Nothing that transpires in this first hour is surprising (way less surprising if you know anything about the book by Melinda Taub on which the show is based), but it hardly has to be. It’s got all the best tropes (including enemies to lovers and forbidden love), with the benefit of having them employed people we don’t usually get to see in these kinds of stories. But it lacks the breakneck speed and dark and twisty turns of other Shondaland productions. This isn’t a bad thing (not everything can be Scandal, thank goodness), but it could make Still Star-Crossed perfect for summer.