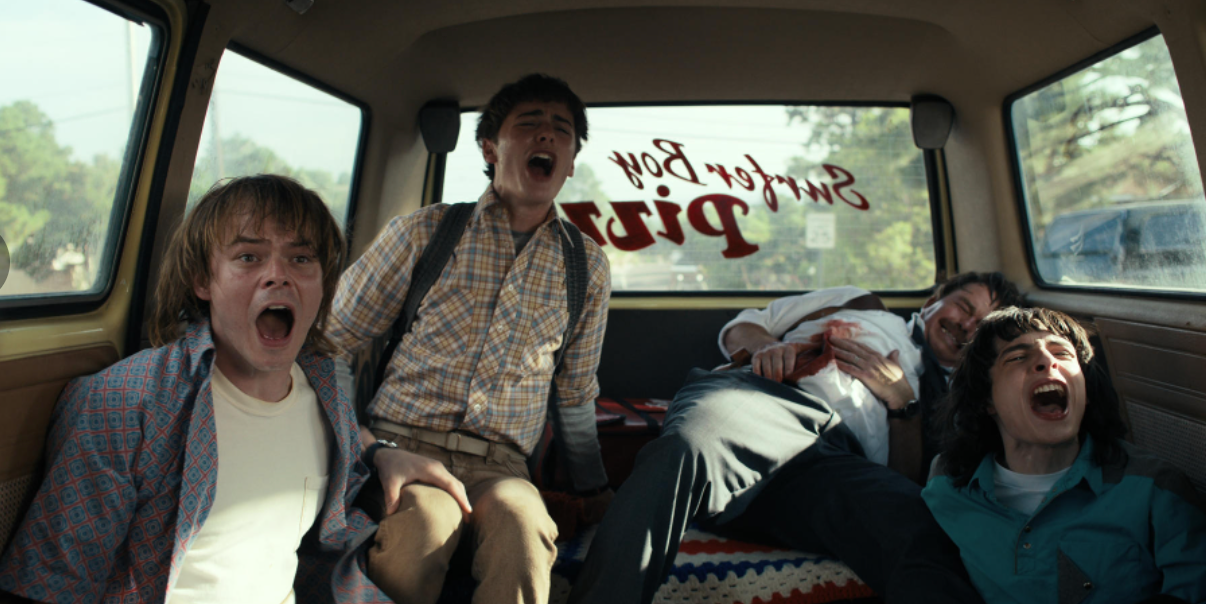 Stranger Things season four is a thrilling roller coaster ride that is downright scary in all the right places. When we last saw Joyce (Winona Ryder), she was moving Eleven (Millie Bobby Brown) and her boys Will (Noah Schnapp) and Jonathan (Charlie Heaton) away from Hawkins, Indiana, as they grieved the loss of Hopper (David Harbour). As season four begins, six months have passed since our favorite nerds won The Battle of Starcourt Mall and Eleven lost her powers.

Mike (Finn Wolfard), Dustin (Gaten Matarazzo), Lucas (Caleb McLaughlin), and Max (Sadie Sink) are enduring their first year at Hawkins High. At the same time, Steve (Joe Kerry) has graduated and works at the video store with Robin (Maya Hawke), who is in her senior year. Nancy (Natalia Dyer) focuses on getting into college and maintaining her long-distance relationship with Jonathan while working on the Hawkins High newspaper.

According to The Wall Street Journal, Netflix spent around 30 million dollars per episode on Stranger Things 4, and it shows big time. The episodes all run over an hour-long and are like watching short films. Season four has nine episodes and is broken into two parts. Volume One consists of seven episodes (to be released on May 27, 2022), and volume two has two episodes (to be released on July 1). The first episode of season four, “The Hellfire Club,” takes place in March 1986, picks up the narrative seamlessly, and shoots off like a rocket.

I connect with Stranger Things because I went through middle and high school in the 1980s, and this show gets the culture of the time exactly right. These suburban kids look and sound like I remember myself and my friends looking and sounding.

Everything including riding bikes everywhere, working at the mall, and the distinct high school cliques, when I watch Stranger Things, I get to feel nostalgia for the suburban upbringing that I never thought I’d feel nostalgia for. It’s also fun to see young actors from the 80s that I loved as a kid, like Sean Astin (Rudy, Lord of the Rings) and Matthew Modine (Full Metal Jacket, Married to the Mob) playing grown-ups in a show placed in the 80s. It’s like totally bitchin. (80s slang)

Season four hints at A Nightmare on Elm Street and The Conjuring with a splash of Say Anything and a dash of Cheech and Chong’s Nice Dreams sprinkled throughout the season. The Duffer Brothers are gifted storytellers. One of their many gifts is authentically reflecting the pain of what it’s like to be an outsider, how fantastic it is to find your people, and how much work it takes to hold on to the chosen family you love.

When you have a group of close friends in middle school, it’s unusual to maintain those bonds once you enter High School. At this age, there are vast opportunities to evolve, creating the ability to break caste. A growth spurt combined with working out between eighth and ninth grade can turn a nerd into a jock in months, shifting a kid’s social status. Many of us can relate to being outsiders when we were young people. Stranger Things allows us to embrace being a nerd as a superpower.

The kids in the cast are now young adults, and they have changed, but it’s not blatant because the costume, makeup, and hair departments are brilliant. Yes, I know these young actors are probably older than who they are playing on-screen, but I’m willingly able to disbelieve because I totally believe in the world the creative team has brought to life.

At the end of season three, Will decides to let go of Dungeons and Dragons and move on, and he witnesses his best friend Mike fall in love for the first time. Season four goes a little deeper into this dynamic and allows us to see how Will and Mike come together to face new challenges together.

My hands-down favorite relationship in Stranger Things is between Steve and Robin. Robin came out to Steve in season three, and his response was beautiful. The connection he was feeling was always platonic, and not having the love relationship feelings cloud their interactions just makes their storyline add more flavor to the series. Lucas has grown himself to warm the bench on the varsity team, and I love the complexity of his storyline. Lucas has his plate full, trying to manage his relationship with his friends, Max and his sister Erica (Priah Ferguson), as he yearns to create a new identity for his high school self.

It’s so much fun watching him work his way through the complexity of teenage angst. Season four gives us a deeper look into the socio-economic class challenges kids face through a new character, the Dungeons and Dragons metal head Eddie Munson (Joseph Quinn), who lives in a trailer park and connects with the group in a significant way. Stranger Things has always had one negative aspect: how shrill many of the actors can be. There is a pattern of one character wanting to do a task, then other characters asking why or arguing, which is redundant and annoying.

Netflix’s investing so much money into each episode has given Stranger Things’ creative team to go all out in terms of production design. The monsters in the Upside Down that go around are scary but not as terrifying as The Demigorgons running around in season one. Those things gave me nightmares, but the haunted house aspect this go around gives some sinister vibes that fit the period and freaked me out in all the best ways.

In the 1980s, the white conservative Christians were obsessed with persecuting people who listened to rock music and played Dungeons and Dragons, accusing them of being members of Satanic cults who were Devil worshipers. The Duffer Brothers don’t shy away from that energy, and watching how these elements unfold in Hawkins is chilling. From Government conspiracy theories to Russian soldiers doing some seriously shady shenanigans, Stranger Things 4 is a binge-worthy blast from the past that is surprisingly relevant in our present reality.