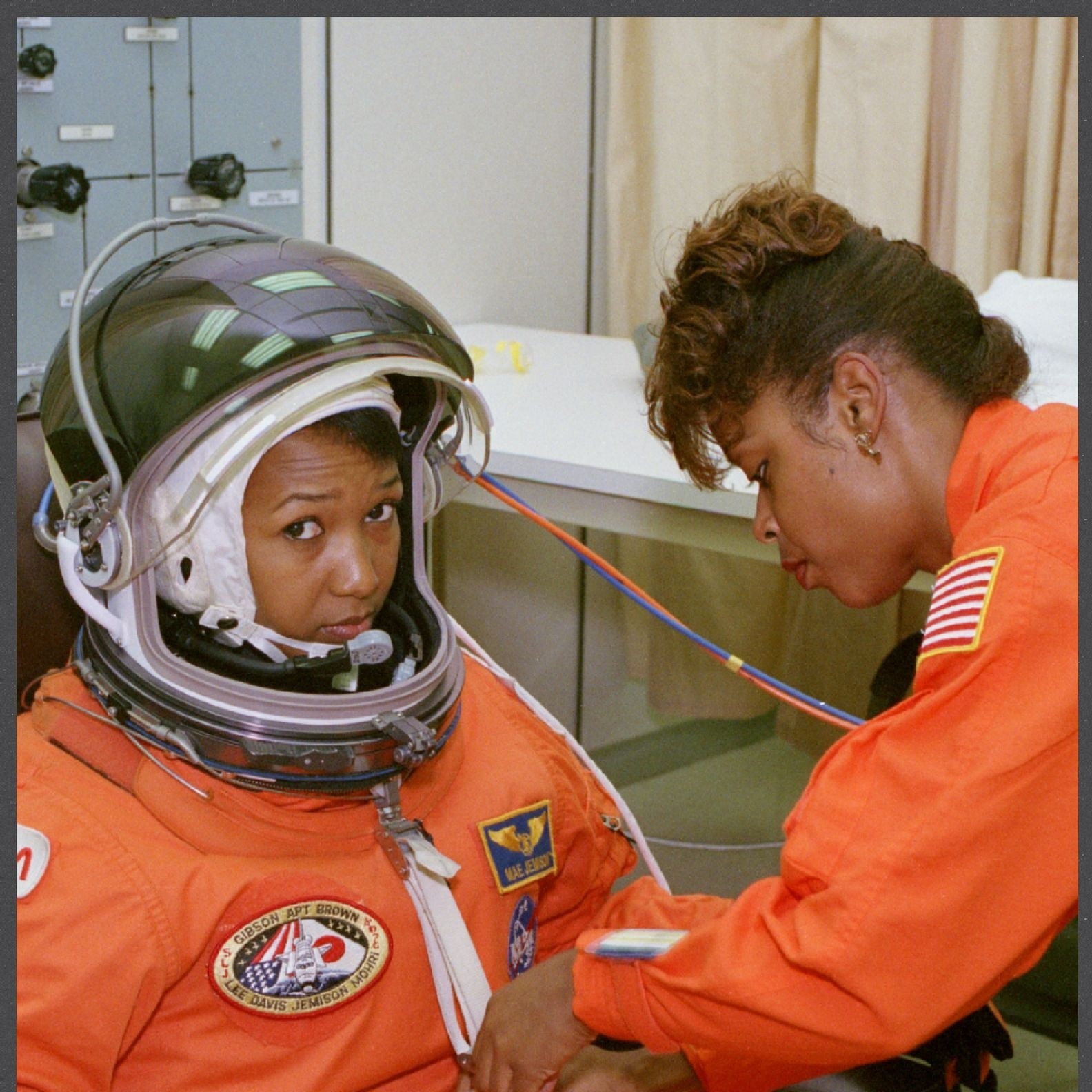 The film Hidden Figures revealed something that many of us knew already; Black Girl Magic is real. Not only have we reached out to the stars, but Black women and women of color are forces to be reckoned with when it comes to science, mathematics, and technology.

Sharon Caples McDougle is one of these women. She is the very definition of Black Girl Magic, with a career that began in the United States Air Force and culminated with her becoming the first African American woman to head the Space Shuttle Crew Escape Equipment (CEE) Division for the United Space Alliance Program (USA). McDougle has outfitted the likes of astronaut Linda M. Godwin as well as THE Mae Jemison. McDougle’s contributions to the space program have been recognized and documented by the NASA Johnson Space Center Oral History Project and we feel honored that McDougle was willing to share her amazing story with us.

Where are you from? Moss Point, Mississippi

What are your hobbies? I don’t really have any hobbies. But, my interests are attending Broadway shows, plays, and concerts. I’m also a bit of a daredevil.

Tell us something nerdy about yourself? I’d rather read a book than watch TV or a movie. When I was a child, I loved and looked forward to going to school.

Tell us a little bit about your childhood. What inspired your career path? I grew up in a small town where school was my refuge. To be honest, there wasn’t any particular inspiration for my specific career path. I wasn’t sure what I was going to do right up until my senior year in high school when an Air Force recruiter spoke to our class. It was then that I knew what my initial path would be – to join the Air Force.

What is your educational background? What degree(s) or training do you have or are working on? My background is my Air Force training – I joined right after graduating high school. I completed some college, but did not obtain a degree.

What inspired you to choose your field of study? What did it take to become the first Black woman Crew Chief for NASA? My entire Air Force career had been working with pressure suits worn by the crewmembers that flew high altitude reconnaissance missions. I realized the only place I could probably use my skill set would be at NASA working with the astronauts. Approximately six months after departing the Air Force, I interviewed with Boeing Aerospace Operations and was hired as a suit technician. I was the only Black team member in my department at the time I was hired – there was one other female suit tech besides myself. My Air Force experience played a major role in [leading] me, the first woman and first Black technician, to become a CEE Crew Chief. I was a very hard worker, reliable and dedicated to my crew and the company – earning the respect of my peers, astronauts, and management. I was actually performing Crew Chief duties while I was still a technician. This was noticed by my supervisor and I was promoted to Crew Chief.

Describe the day you suited up Mae Jemison for space flight? How did you feel?

As you can imagine, this day was very exciting for me. I’d suited her up many times before, but there was electricity in the air on actual launch day. I felt like it was my birthday and Christmas all wrapped up in one – the first Black woman would be blasting off into space today! I laid out all of her equipment (suit, helmet, communication cap, gloves, and ancillary items) in preparation for her arrival. We were both all smiles as she walked into the suit room wearing her liquid cooling garments (underwear worn under the suit). We greeted one another, hugged, and got to work. We chatted as I suited her up. Once she was fully suited, I performed tests on her suit, checking for: proper connection and operation of all equipment, proper pressurization, leaks, etc. I looked her over one final time to make sure everything was perfect before she walked out of the suit room. We hugged one more time and waved to each other as she headed down to the astro van to ride out to the Space Shuttle Endeavour.

What were some of the challenges, as a woman of color, that you ran into in your field? I was very fortunate to not have any real challenges. I feel I was treated very well throughout my career.

What were the coolest aspects of your job? The coolest aspects were seeing so many launches up close and personal. Our job was somewhat glamorous compared to most space careers – we were the faces of the Space Program. I also enjoyed taking the suit to schools to share what we do with the children.

How did you feel when you first watched the highly praised film, Hidden Figures? I was very excited; I felt a kinship with these ladies. If it wasn’t for them, I may not have been afforded my career opportunity. I did feel angry when I first heard about the movie because, just like many others, had never known about these beautiful, intelligent women who played such a major role in the early success of NASA. The movie was amazing and I’ve watched it several times. *Fun fact, I suited up John Glenn, too!

What advice would you like to give to young women of color with an interest in technology, science, and space exploration? I’d like to tell them to not be afraid of technology, science, or space exploration. There are many career paths in these fields – you don’t have to become an astronaut. Anything is possible, but you do have to work hard to achieve success. I advise them to not put off going to college, but to complete their education goals immediately after leaving high school. And lastly, please help each other out; lend a hand to another sister of color whenever possible. Even in this day and age there may only be one or two women of color in these fields.

Thank you, Sharon McDougle, for being a shining example of Black Girl Magic!

The Eclipse Could Damage Your Smartphone?!?