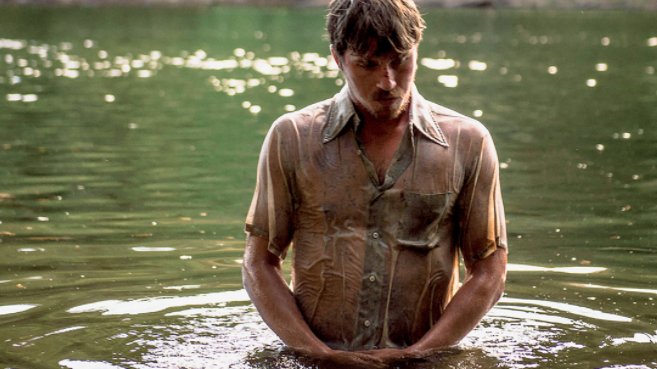 A film over 20 years in the making, filmmaker Andrew Heckler was emotional while delivering his introduction to Burden during the premiere at the 2018 Sundance Film Festival. It’s quite clear this was a passion project for Heckler, as he adapted the film based on true life events into an emotional story starring Garrett Hedlund, Forest Whitaker, Andrea Riseborough, Tom Wilkinson and Usher Raymond.

Set in a rural town in Confederate flag-ridden South Carolina, Mike Burden (Garrett Hedlund) is a man who finds solace among the KKK and wants to prove to himself—as well as others in his community that he’s just as capable of being the hate monger than the rest of these men are.  However, on one fateful day when Mike meets Judy (Andrea Riseborough) his life is forever changed when she encourages to seek the good in people and challenges his hateful ways. And it is because of this relationship, he decides to leave the KKK and meets Reverend Kennedy (Forest Whitaker) who unconditionally accepts Mike despite all he’s done as a white supremacist.

I was wary of a plot of yet another Black man who has to show the white man the error of his ways and demonstrate through his own self-sacrifice what love, compassion, and solidarity is all about. Also that somehow or another we have a story of a man that we must feel some kind of compassion for that hates Black people.  The fact that Rev Kennedy opens up his home with his wife and son living there and quite possibly endangering them due to Mike’s ties to the KKK, gave me pause and yet another exhaustive sigh.  However, it wasn’t until a moving speech by actress Crystal R. Fox who played the role of Rev Kennedy’s wife Janice, that made me rethink my sentiments and judgment about this story. Fox told the audience that although this movie took decades to make, the fact that it is out now in a racist political climate, that this story and film is right on time. It made me wonder if perhaps we do in fact need a story like this right now.

Mike Burden in this film was a man that was influenced by an atmosphere of hate toxic rhetoric towards people of color.  The leaders around him and his colleagues encouraged this venomous ideology of white supremacy. It wasn’t until Burden found solace and hope in his relationship with Judy, which further extended deeper into his relationship with Rev Kennedy, that we realize hate can change into love.  It may seem to be trite and yet a bit cliché seeing the story of the man who hates eventually finds a way to love. Whitaker and Hedlund give the strongest performances and Usher Raymond who plays Clarence delivers on his supporting role as the childhood friend of Mike, who’s now seen that 180 that has occurred in Mike’s life.  The film makes it a point to have you understand that Mike Burden wasn’t always this way—yet he was taught to become this way.  This is the message behind the film. Burden doesn’t break any new ground with its story or social commentary on race, but it is a timely piece of work that centers on love in a world filled with hate. I’m not sure if dismantling racism based on a love affair is the kind of movie I want to see right now.

Burden is currently screening at the 2018 Sundance Film Festival.