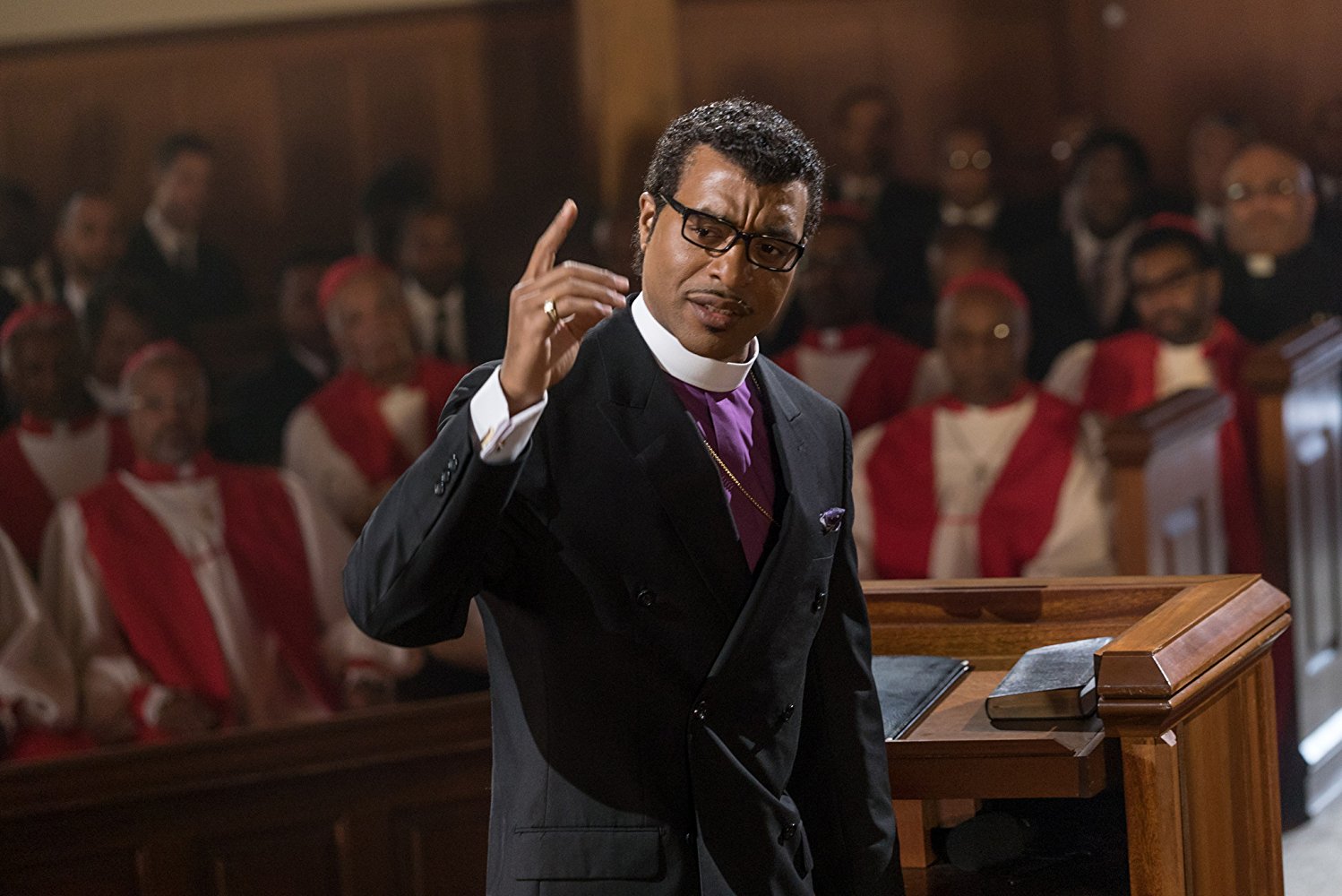 Come Sunday, written by Marcus Hinchey and directed by Joshua Marston, is an intellectual and spiritual mashup that centers on what happens to a man of God after a unique encounter that shakes his faith, changing his doctrine and fundamental beliefs in the Pentecostal church.

Come Sunday, based on actual events in the life of Bishop Carlton Pearson (Chiwetel Ejiofor), is a deeply personal glimpse into the man. Bishop is a devoted Christian, with a knack for engaging with anyone in an authentically human way. He spends most of his time at church, investing in his congregation and trying to reach more people in an attempt to save their souls from hell. He moves through life with his wife Gina (Condola Rashad) and their two children, although it feels like he does so out of obligation to keeping up appearances, versus an inherent need or interest in being a family man.

When we first meet Bishop, he is at the height of his pastoral career, and a low in his personal relationship with Gina. One night while up late, Bishop hears the voice of God, and it changes the way he views damnation to hell. When he shares this with his congregation and closest friends, their response is less than ideal. He eventually loses everything and has to cling to the most important people in his life to rebuild.

Come Sunday, for me was a neutral blend of humanity and spirituality. Ejiofor gives a moving performance as a man who has so much of his identity wrapped up in shepherding people, that when this ends, he loses not only key people in his life, but also himself. He is raw, honest, and deeply uncertain when his flock doesn’t give him the praise or support he was expecting and desired. His relationships with Henry (Jason Segel) and Oral Roberts (Martin Sheen), who he affectionately refers to as “Chief,” humanizes him in a way that displays his brokenness. I wish we would have seen more of his childhood, his past, and a deeper relationship with his Uncle Quincy (Danny Glover), before his untimely death.

The overall standout performance for me though was Reggie (Lakeith Stanfield), a gay man struggling with Bishop’s doctrine and what he considers his imminent decent to hell. In my opinion, it is their relationship that impacts Bishop and pushes him the most. Reggie is who he is, and he struggles between changing himself, accepting God’s love, and then accepting his fate. When he becomes gravely ill, he asks Bishop to save his soul, because he does not want to go to hell. This is the best scene of the film, and Lakeith is so raw that you cannot help but to be heartbroken. Rashad also gives a great performance as Gina—not your traditional First Lady of a church. She is beyond opinionated and her focus is on her family. While Bishop spends everything he has investing in the church, she is invested in their kids, and pursuing emotional health. At one point, we find out that she goes to see a lawyer ito communicate that she will leave him if he doesn’t start prioritizing their relationship.

Overall, I wish they dove more into the spiritual themes, but Bishop’s story is intriguing. The loss of his congregation pushes him to lean in deeper with his wife, and with Reggie; it’s as if this abandonment gave him perspective. Bishop eventually finds himself again, but not without a price. I originally saw this film because I was hoping for a more spiritually-charged adaptation that spoke more closely to God’s love and grace, seeing this man out of one of the most challenging periods in his life. While I did not necessarily get all of that, I did walk away with a new interest in Bishop and an eagerness to learn more about his story. In times like these, it is important to see stories of redemption and acceptance, and Come Sunday delivers just that.