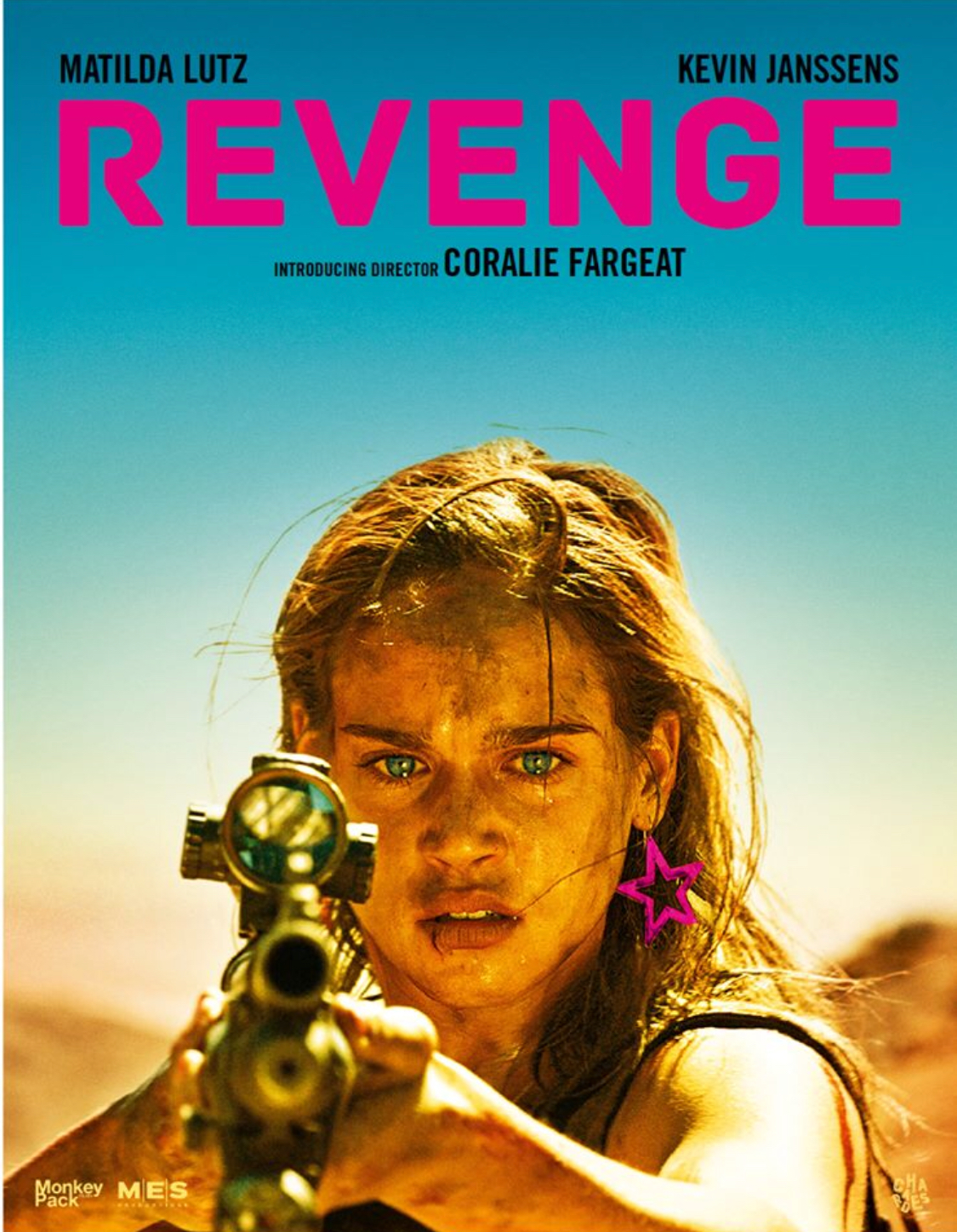 Revenge is a French horror film that starts off rocky but finds it’s way home.

Revenge centers around Jen (Matilda Anna Ingrid Lutz), a young American woman having an affair with Richard, a married French businessman (Kevin Janssens). While away together on a romantic holiday, Richards’s friends Dimitri (Guillaume Bouchede) and Stanley (Vincent Colombe), arrive to go on a hunting trip. When Richard’s friends come early, they unexpectedly meet Jen, and Stanley’s creepy sexual attraction to her becomes grossly apparent. Richard, never directly addressing Stanley’s behavior before it gets out of hand, just takes off to handle some pre-trip business.

While he is gone, Stanley violently rapes Jen, with Dimitri turning a blind eye. Dimitri barely speaks within the first 30 minutes of the film, and yet, when there’s an opportune moment for him to do so, he just stands there, remorselessly eating his ice cream. He walks out and turns up the TV exceptionally loud to drown out her screams. This is haunting and disturbing on so many levels. As a woman, you really see the helplessness on Jen’s face and in her posture. You’re also instantly disgusted by the actions of both men.

When Richard returns, Stanley confesses. In order to silence her, Richard offers her a new job and money for her troubles and cooperation. When she resists, he becomes violent and eventually pushes her off of a cliff, leaving her for dead. What they do not realize is that Jen is far more resilient than she looks and, when she comes to, she’s out for blood. As they go “hunting” in an attempt to maintain an alibi, they really are not looking for game, but for her, knowing that they need to finish the kill before she finds them.

Revenge starts off filled with toxic masculinity and slut-shaming. It is exceptionally hard to watch, especially as a woman, as Richard puts Jen on a pedestal as his sex object, then condescendingly beats her down physically and mentally, mere hours after her rape at the hands of someone he calls a friend. He allows his comrades to ogle at Jen in ways that are uncomfortable for her, and should be, for everyone else.

Richard, Dimitri, and Stanley never see the error in their demented and sociopathic ways. Richard treats murder and women as disposable, like an untouchable cis-white male, with no cares in the world. When Dimitri starts to show some signs of regret, you realize it’s rooted heavily in his not wanting to get caught, but not in shame or guilt for his actions.

Eventually, Jen gets her revenge, but it does not initially start that way. In the beginning, it’s more so a game of cat and mouse. As someone who isn’t typically a fan of horror, you of course find yourself rooting for Jen to prey on them and not only take their lives, but take back her body. As she picks off the men, one by one, the ending gives you exactly what you need.

It is a delight to finally see Richard—as she saves him for last—get what’s coming to him, and more. So, while I found it incredibly hard to watch from a humanistic and emotional standpoint, the theater was cheering at the end when she took her final shot of revenge on the man that tried to bury her heart, body and soul.