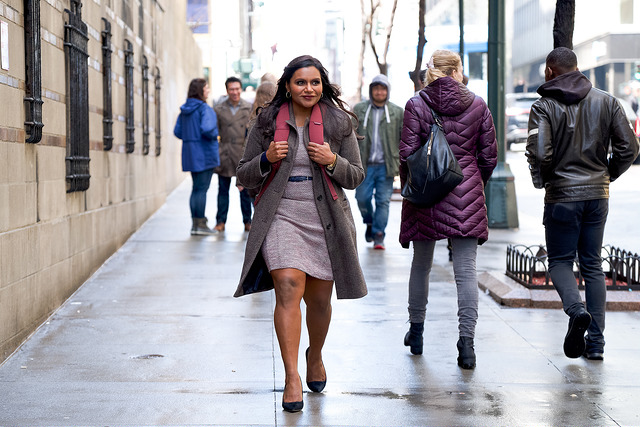 In the world of late-night television, dominated and ruled by white guys, the new comedy Late Night — written by Mindy Kaling (The Mindy Project) and directed by Nisha Ganatra (Transparent) tells the honest truth about where women of color fit as comedy writers in prime time television.

Katherine Newbury (Emma Thompson) is a seasoned veteran on the late-night circuit and happens to be the only woman with her own show. Ironically enough, she doesn’t see past the fact that her own writers’ room comprises of only white men. She’s an intimidating curmudgeon, with a bossy attitude and set in her ways. And with her English accent, her firm demeanor is reminiscent of the game show host persona of Anne Robinson in the TV series The Weakest Link.

However, when Katherine is accused of not giving women an opportunity to work on her show “Tonight with Katherine Newbury” she decides to seek a diversity hire to fill the spot of a writer she recently fired.

Katherine hires Molly Patel (Mindy Kaling) to fill the diversity spot in hopes that it will appease the media’s criticism of her white male writers’ ratio.  However, Katherine has another problem to solve — her lackluster ratings over the last decade.  When the president of the network bluntly tells Katherine she’s going to be replaced, Katherine will stop at nothing to keep the show she’s helped build over the years.

This sophisticated comedy tackles issues about gender discrimination, white privilege, and microaggressions against people of color in the workplace.  Kaling brilliantly puts together a story that seems all too real. Kaling did say at a press screening during Sundance, “the stories about the writers’ room were entirely fictionalized”.  However, she did add that although she did not share the same experience, many elements of the story were true.  In fact, Newbury’s character is based on someone she knows in Hollywood whom Kaling states, “shall remain nameless”.

Kaling doesn’t hesitate to take a jab at the white male ego and actor Reid Scott who plays one of those haughty white guys doesn’t disagree. He added in the press screening Q&A this statement:

“As a privileged white prick whose made a career out of being one, I’ve seen my archetype my entire life and gets fucking boring.”

And while what Scott says is true, what is also magnificent about Kaling’s script is that the white guy writers she takes shots at aren’t written as one-dimensional fodder for the plot. Another of the writers’ room collaborators is played by actor Paul Walter Hauser. He adds, “[the guys] are teachable and valuable, they have really cool turns and even though the film isn’t about them, it feels like it’s about the writers’ group.”

Mindy Kaling started to write the script for Late Night 3 1/2 – 4 years ago. She stated she wrote it with Emma Thompson in mind and was certain only she could do the role.

“I was the creep writing fan fiction hoping one day she would read it’.

Emma Thompson’s character has an impeccable story arc that gives the audiences mixed feelings.  You hate her one moment and you love her the next. Kaling is who a natural talent at comedy and Thompson who is legendary in snark and witty humor have incredible chemistry and deliver flawless performances.

There is a brief appearance by actress Megalyn Echikunwoke, who plays Newbury’s recently hired publicist after a scandal breaks that compromises the late-night host’s reputation. It’s refreshing to see Echikunwoke in another comedy because she does it so well.  The humor in Late Night comes right off the page, and I found myself laughing through nearly every scene of this movie.

Late Night also closed a $13 million dollar deal with Amazon, which is slightly higher than what the competitive streaming giant Netflix did for Mudbound ($12.5 million). And it’s not surprising given the climate of today’s culture around diversity in entertainment and specifically women of color in entertainment.

Filmmaker Nitra Ganatra believes that film and TV can change a culture and that she got into filmmaking to center marginalized stories. Towards the end of the Q&A, she brought out her 3-month old daughter to the stage and mentioned that she was 5 months pregnant while filming the movie. And in a declarative statement, she elected to say how important it is to hire pregnant women.

Ganatra also adds how this film is an ode to hard work.  Whether you are male, female, white or person of color — this is a film that everyone will fall in love with.