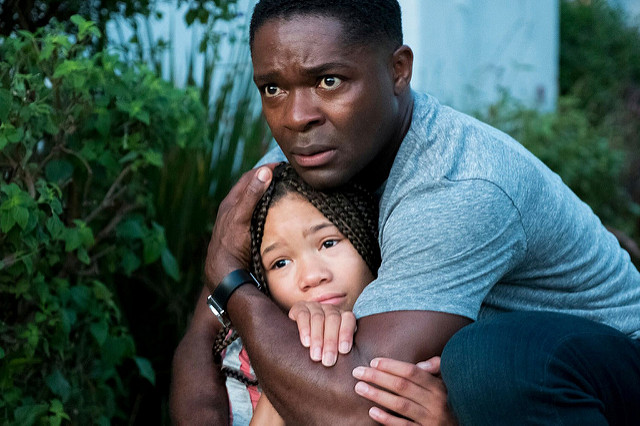 Before you sit down to watch the Blumhouse thriller Relive, make sure you throw all logic out of the window. The foundation of this film is centered on the idea of the ability to save someone, even if it means having to relive the traumatic and horrific experience of their death in order to do it.

Director Jacob Estes (Mean Creek) takes us on a psychological topsy-turvy ride about an L.A. detective named Jack Radcliff (David Oyelowo) and his quick-witted niece Ashley (Storm Reid).  Jack and his niece Ashley are close and call each other often. It is clear through their consistent communication, they each are intuitive to the other’s needs. One fateful day, Jack receives a phone call from Ashley and she sounds distressed, the call abruptly ends. The deeply concerned detective rushes to locate his niece, only to discover that Ashley, her parents, and her dog are dead in what appears to be a murder-suicide.

The story begins when Jack receives an incoming call on his cell and Ashley’s name appears on the caller ID. Both mystified and curious, Jack answers the call and hears Ashley’s voice on the other end. It is Ashley before she was murdered — Jack is speaking to Ashley’s past and Ashley has no idea that she is speaking to Jack in her future.

Their phone calls now serve as a connection between two alternate realities and each has to help each other to find out the clues to what happened and to possibly change Ashley’s fate.

Ashley’s father Garret (Brian Tyree Henry) — who is also Jack’s brother — suffers from mental illness and has a splintered relationship with his family. He is used as a patsy, and his own illness is used against him when he’s posthumously accused of murdering his own family.  As Jack uses his skills as a detective to investigate what happened, details slowly expose its way to the surface. It appears what happened to Garret looks more like a homicide.

As Jack is investigating, his partner Bobby (Mykelti Williamson), sees that his colleague is slowly falling into a downward spiral. Bobby aides Jack in investigating the case, even though it violates protocol given the fact that Jack is related to the victims. Jack and Bobby’s boss Howard (Alfred Molina) soon intervenes and dismisses Jack from the case.

This, of course, doesn’t stop Jack from initiating his own investigation and compiling together as many facts about what happened so he can solve the murders. And as those clues begin to unfold, some unexpected and disturbing events take place.

Relive, in pure Blumhouse fashion comes with a lot of gore and violence.  It’s certainly not for the faint of heart and the scenes of the family murder can be quite upsetting.

There are some concerns about the film’s plot and meandering timelines that not only takes us through a maze of confusion — but also seems completely illogical how these events take place.  And yes, this is a genre fiction film, so don’t expect it to be steeped too deeply in reality. It was a bit difficult to connect the dots. The butterfly effect time-travel concept grounded in a detective story has potential here but doesn’t make it quite real enough for the viewer to care about the outcome. The story stays stuck in the reliving and rehashing elements of the story, as opposed to the phenomenon of how the dead can communicate with the living in the first place.  And while I do understand that Relive is part-ghost story and part-sci-fi, adding a bit more clarification on the hows and whys of Ashley’s supernatural connection to Jack would have given the movie more substance.

The phone call conversations between both Ashley and Jack make a great concept for their connection between alternate worlds at first, but as the movie paces onto the second and third acts, you have to take the plot with a grain of salt. Like the fact that Ashley doesn’t keep her phone charged and puts herself at harm’s risk of not being able to communicate with Jack.  We’ve all forgotten to charge our cell phones from time-to-time, but in a high stakes situation where your only communication is your mobile device, holding a charge should be a priority.

Storm Reid, best known for starring as Meg in Disney’s live-action adaptation of the novel A Wrinkle In Time, gives a fantastic performance in this dramatic thriller. The young Disney fans of her previous film are certainly not the audience for Relive, however, Reid and her expanded body of work is keeping her on the path to being a leading lady in Hollywood.

David Oyelowo shines in his role as the determined detective and keeps us on edge as the momentum builds and Jack’s situation gets more stressful.

Although Relive’s story structure and the plot is a bit messy at times, it’s still compelling enough and interesting to watch through multiple viewings. Not once did my mind wander nor did I get distracted while watching the film, and this was during an evening of multiple movie viewings. Films like Frequency, Memento, and The Butterfly Effect have tackled time-line manipulation stories a bit better, but Relive does have its place in this genre.