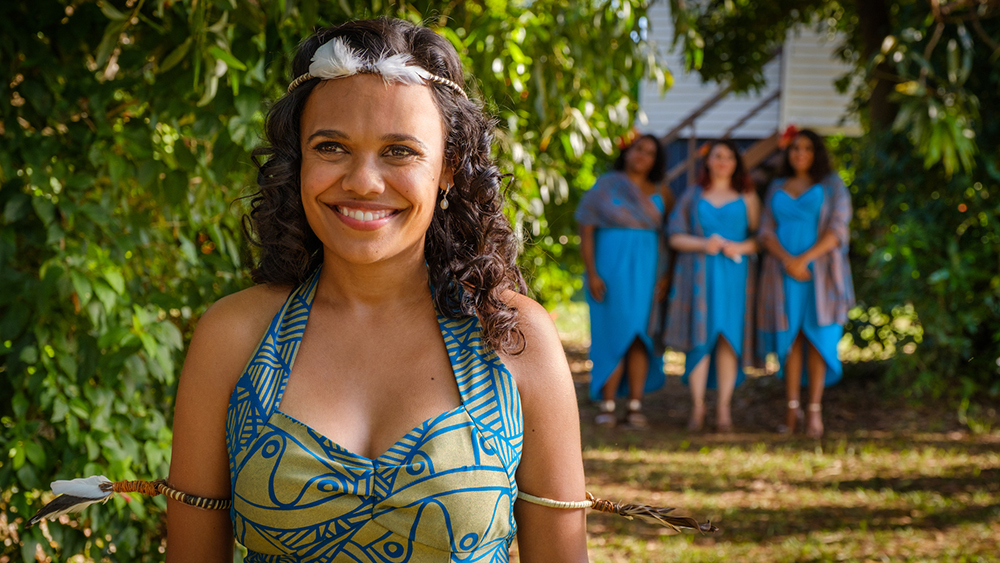 Lauren (Miranda Tapsell) gets a promotion as well as engaged to her boyfriend Ned (Gwilym Lee) on the same day. While she very much loves him, she does have some doubts about whether she wants to get married at all. Her boss Hampton (Kerry Fox) may look like Miranda Priestly, but she’s actually quite fond of Lauren. After a heartfelt chat Lauren decides that yes, she’s keen on getting wed. So, Hampton gives her 10 days off to get hitched and get back to work. From this unusual proposal, Top End Wedding takes us on a journey from Adelaide to Lauren’s hometown of Darwin as they try to cobble together a last-minute wedding at the “top end” of Australia.

But there’s a snag. Lauren’s mom Daffy (Ursula Yovich) has left her dad Trevor (Huw Higginson) and he has no idea where she’s gone. She’s left a cryptic note as well as her mobile phone. Trevor is devastated and taking to locking himself in the pantry listening to Chicago’s “Baby Please Don’t Go” on repeat and bawling. Lauren doesn’t want to get married without her mum there and on her Hen Night she decides to cancel it. 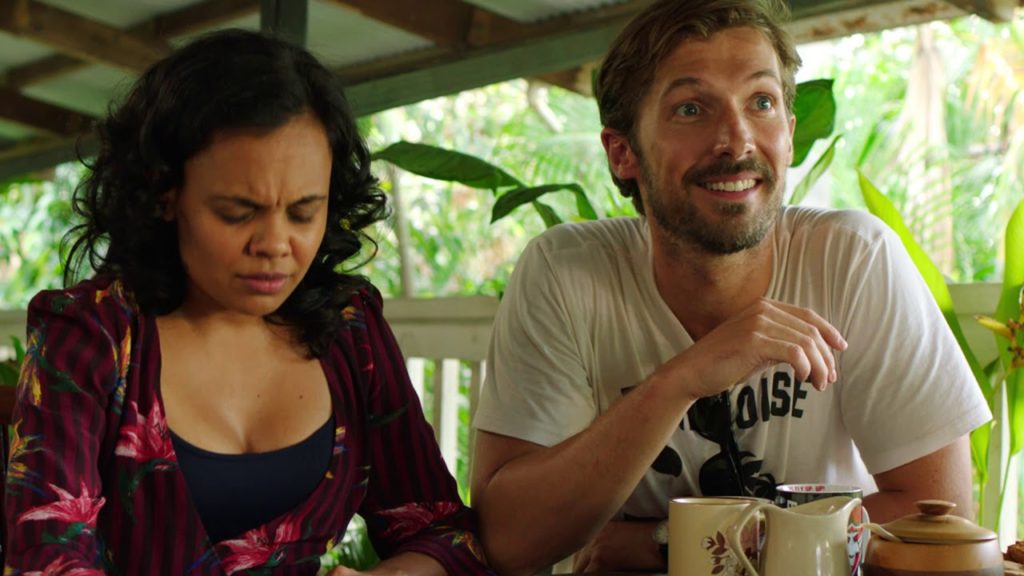 But Ned, being one of the most non-toxic men ever to grace the screen, won’t give up on their union so easily. He does a bit of digging and unearths some of Daffy’s steps before she left her home and phone behind. Lauren and Ned hit the country roads to find her, on a kind of Priscilla, Queen of the Desert journey through northern Australia. After many snags and the clock running out on the scheduled wedding day, Lauren must return to her Indigenous roots in order to reconnect with her mother.

Top End Wedding is the most refreshing romantic comedy I have seen in years. Not only does it rely on hilarious physical and situational comedy — there is no punching down humor here at all — its snappy writing is witty and intersectional. But what’s even better: This is a story about an Indigenous woman and her family that does not rely on horrific trauma and violence to drive their backstory. In reminder #7,854 that diversity in writers’ rooms matters, I can hear Miranda Tapsell’s voice and heritage through her amazing work on Top End Wedding’s screenplay, which she co-wrote with Joshua Tyler. Stories about Indigenous peoples do not need to rely on post-colonial trauma, and Top End Wedding is the new template for inclusive cross-cultural romantic comedies.

That’s not to say that Indigenous themes like displacement and fragmented identity don’t play a part. When she was younger, Daffy left a man at the altar and eloped with Lauren’s dad. She never returned to her ancestral land of Tiwi Island because she was convinced that everyone in her family hated her for what she did, and then marrying a white man to boot. Daffy’s sense of alienation only grew over the decades, and spilled over onto Lauren. Top End Wedding is as much a love story between two people in pre-wedding hijinks as it is a love story about family and history. Quite simply, this is a movie about love. All different kinds. It’s as beautiful as the Australian landscape and its Indigenous peoples. 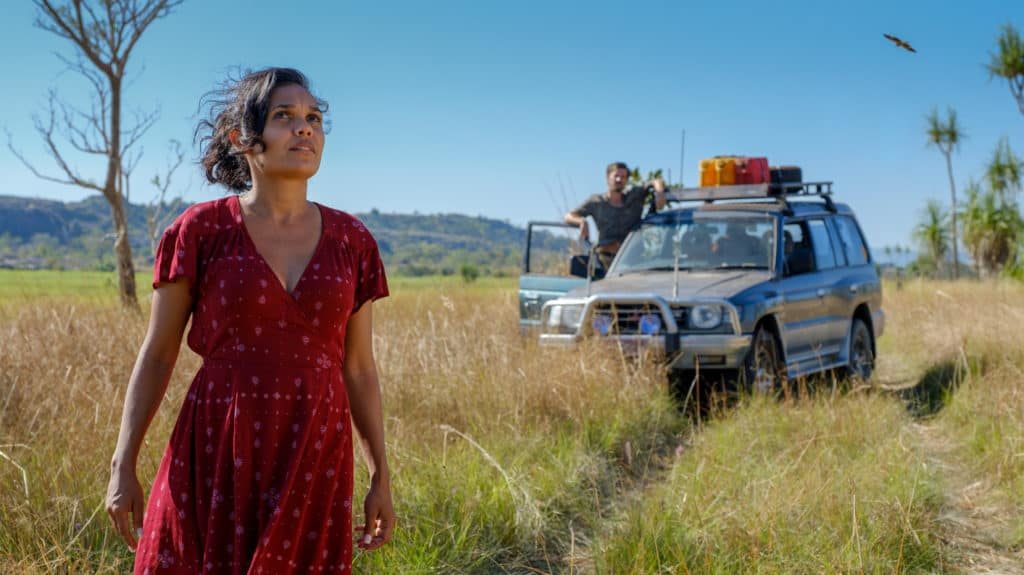 Seeing Indigenous women taking center stage on film, fierce and unapologetic, and especially in a romance story, is not something we see every day. Or at all. After this, I need more. The world deserves hundreds of hours of this kind of Indigenous representation. I’d consider it reparations for all the time they have been left off screen, or their bodies objectified to prop up white colonial narratives.

With all of that wonder Top End Wedding still manages to be a charming bowl of raunchy fun while nodding its head to some fixed rom-com tropes. Yes, there is an epic dance scene. Yes, there are penis straws and penis cake for Lauren’s bachelorette party. Yes, the ensemble characters are wild and quirky. But having Indigenous women at the center of it all brings these familiar scenarios into fresh territory.

There is so much I loved about this movie and its inclusivity. There’s an overwhelming presence of non-toxic, nurturing masculinity. Ned lost his father just six years before and had been trying to fill his mismatched socks ever since. At first his attempts at bonding with Lauren’s dad Trevor get off to a rocky start, but quickly their conversations elevate to vulnerable and honest territory. Trevor grieves his wife’s absence openly, and regrets the roles he played in her leaving. In other words, he takes responsibility for part of the pain he’s in as well as the pain he caused her enough for her to leave. It’s remarkable. We don’t always need to rehash men’s bad behavior to call them out. We also need to start making more space on screen to model men’s good and healthy behavior, especially when it comes to how they deal with pain.

Top End Wedding is a touching film about love, family, and second chances. Its cross-cultural themes make this narrative all the more powerful. You will need some tissues as the various redemptions in this film are heartwrenching as they unfold and conclude. The film is also so brilliant it manages to be a fantastically funny comedy to boot. In fact, this isn’t just a romantic comedy at all. Top End Wedding is art — Indigenous art at some of its finest.