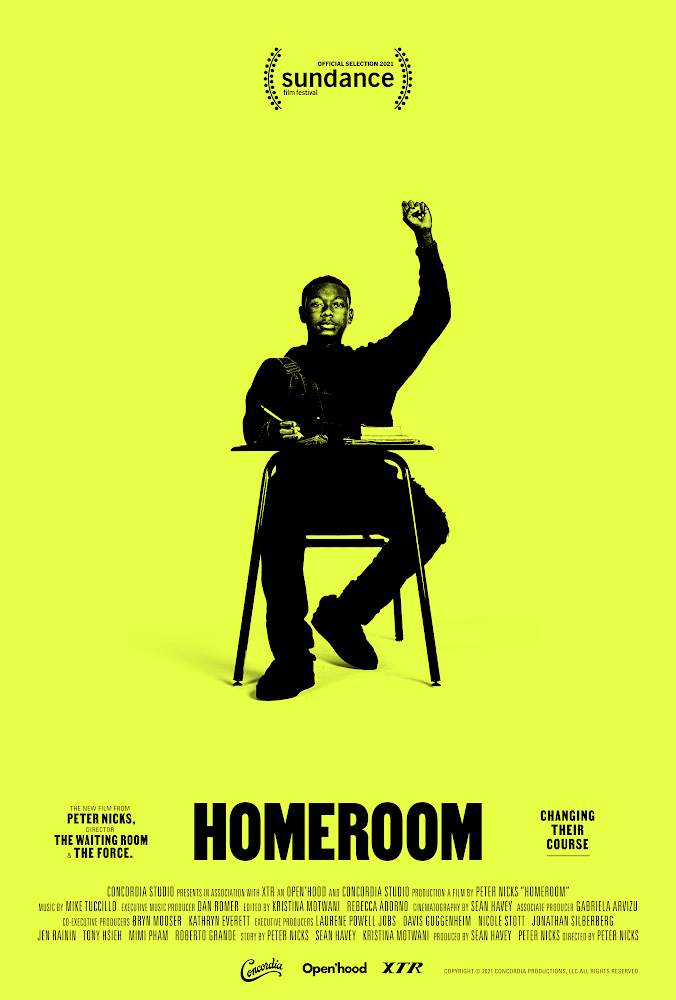 2020 has proven to be the year that constantly surprised the country in the worst way. From social distancing to racial tension, the year had constant twists and turns. What was this earth-shattering year like for the lives of high school seniors? That is the question that is raised and beautifully answered in Homeroom, director Peter Nicks’s final movie in his introspective and intimate trilogy showcasing the city of Oakland, California. Through Homeroom, Nicks is able to not only showcase the butterflies and innocence of Oakland High School’s senior class, but their maturity and bold hearts as they fight for justice and equality at their institution and beyond.

Produced by companies Concordia Studio and Open’Hood, the movie begins with a standout line from Denilson Garibo, one of the more prominent students in the film: “I am a f****** senior.” Through the montages of each of the student’s social media accounts, the viewer is able to see them like a cute boy’s post or the latest TikTok. However, we can also see the images of police brutality and protests zoom through their thumbs. Oakland High School’s senior class is focused on getting through the typical senior year checklist: submit college applications, find a cute outfit for homecoming, spend time with your friends as much as you can. However, Nicks is able to show that there is an enormous amount of pressure that lies on the class to create a better environment for future students and the community as a whole.

Oakland Unified School District is far from non-controversial. From school closures to teacher strikes, an angry individual at their city council meeting is not a unique sight. The pulsing conflict that is felt in every scene is not an issue with the school specifically, but rather the police force meant to protect it. Nicks documents the high school’s All-City Council as they work with the school’s administration to try to cut the enormous amount of funding going into the school’s police force and put it into programs such as mental health and school resources. The student directors are able to be liaisons between students and those serving on the district board. Yet over and over again, they are shut down by those older or even whiter than them.

If the students and district board were able to fight together, then much more would be able to be accomplished for the school and community. However, numerous adults on the board and in the crowd looked at the student directors and their classmates as what they were on the surface — just teens.

Nicks through Homeroom proves that these students are much more than emojis and the “Renegade.” Oakland provides a colorful and alluring backdrop to the fights these students put up to demonstrate what is right and wrong — and in the documentary, the police force at Oakland High School is clearly in the wrong.

In one of the most powerful scenes, some of the students visit a youth outreach program at the Oakland Police Department. As one of the officers tries to calm the students down and say that not all officers are what you see on social media, Nicks expertly directs the camera to each of the teens’ faces. They are all cynical at best.

Despite the tense climate at their school due to a towering police force, the students are able to continue towards the new year of 2020. It is haunting yet heartwarming to see how excited each of the students are shown to be as they start a new decade. Trump’s impeachment is even touched on as the students look at the news on their phones with disbelief. It seems like the tides are finally changing. However, the viewer knows that what is to come is far from joyful.

Even though the senior year joy on the students’ faces is now on camera through Zoom, the students of Oakland High School make the best of it. That is the lesson that needs to be taken from this documentary. These Black and Brown students are faced with the most incredible odds due to their environment, the police brutality around them, and the racial injustice making them feel unsafe. Nevertheless, they go out of the way to make their voices heard — whether people want to hear it or not.

They scream “Black Lives Matter” in the street in defense of George Floyd, Ahmaud Arbery, Breonna Taylor and even Oakland High School’s very own Nia Wilson. They yell for the police who continuously make them wary of who they are to be gone once and for all. They continue to appear in spaces to promote inclusivity and diversity that want nothing more than for them to be gone. In a whole pandemic, they put on their masks and while continuing their education during the day, hit the streets at night to stand up for what is just. Nicks not only showcases students at Oakland High School, he showcases future game-changers. These teenagers are superheroes in a world that sees them as less than ordinary. Homeroom is a snapshot of who holds the future of our country — and from what Nicks displays with his sharp eye and acute observations, we are in good hands.

Peter Nicks Showcases the Life of the Average Student in ‘Homeroom’