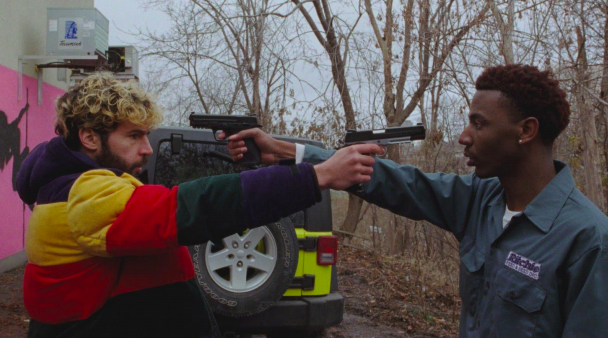 The logline for the film On the Count of Three is pretty succinct: Two guns. Two best friends. And a pact to end their lives when the day is done.

Comedian Jerrod Carmichael (The Carmichael Show) makes his directorial debut and stars in this dark comedy co-starring Christopher Abbott (Black Bear, Possessor). Val (Carmichael) and Kevin (Abbott) are at their wit’s end in their lonely, depressing lives. Val makes a failed suicide attempt in a public restroom only to be interrupted by a intrusive and annoying co-worker who won’t let him end his life in peace. And then there’s Kevin, who is currently living in a mental health facility and also attempted suicide three days earlier — now living under surveillance. The two best friends have made it clear that the only way to get this right is to create a suicide pact between the two and bring their collective misery to an end.

However, things are not so black and white when Val helps Kevin escape from the institution to execute this plan. As the two friends point handguns at each other and count to three, Kevin suddenly pushes Val’s hand away causing the bullet to miss and deliberately thwarts their plan to escape planet Earth.  This sudden ambivalence from Kevin is what leads the viewer on a new journey between these two and takes us on a wild ride into the psyche of how these men think and the events that led them to their severe depression.

While On the Count of Three could easily be branded as a dark comedy, it’s a bit more substantive than most films of that genre.  The film touches on issues that deeply impact people in the mental health community.  This included the trigger for Kevin’s depression specifically, having to deal with a history of sexual assault.  There is also Val’s character coming to terms and confronting an absentee father, Lyndell (JB Smoove), who you can arguably say played a role in the deterioration of Val’s mental health.  And dark comedies on the subject of suicide is definitely a tough genre to cross-pollinate. The 1989 movie Heathers that broached the subject of suicide with teenage angst and popular high school trends is a story that still resonates in this sub-genre, but unfortunately, On the Count of Three will not.

There are moments that deliver punchlines with poor execution and super cliched scenes. For example, Kevin points a gun at a convenience store clerk and later pays for the items after robbing the clerk at gunpoint (because he didn’t listen to him). Scenes like this is enough to have you thinking that you’ve seen this play out before.

There’s also the lack of chemistry between Carmichael and Abbott.  For a film that is carried solely by these actors, sadly they’re pretty lackluster as a duo who are supposed to keep and maintain our interest throughout the film.  While the script from writer Ari Katcher (The Carmichael Show, Ramy) and Ryan Welch (Ramy) has a substantive plot that reveals and opens up a Pandora’s Box of issues these two mentally unstable men are fighting with in their lives, the dry humor and flat performances from Carmichael and Abbott are not enough to give this bland film some flavor.

Carmichael brought in additional talent to add to the mix, such as Tiffany Haddish and Henry Winkler.  While Tiffany has enough screen time for you to get up to fix a sandwich and sit back down, even she could not save this film.  Once again, Haddish is pegged to a 2-dimensional role as the nagging girlfriend, Natasha, eerily similar to her role on The Last O.G.

There is a unique role depicted by Henry Winkler as Dr. Brenner, who has had a significant impact on Kevin and Val’s lives. While On the Count of Three misses the mark thematically as a comedy — if that was the intent — it at least exposes within its plot the impact mental health has on the human psyche when it goes unchecked for an extended period of time.  It also exposes how the trajectory of these men’s lives could have changed if someone had simply listened or cared enough about their story.  Issues of abandonment, sexual assault, depression, anxiety, and bullying are all touched on in this narrative, which are in and of itself their own catalysts that fuel Val and Kevin’s downward spiral into suicidal depression.

On the Count of Three possibly could have worked better had they removed the comedic element from it and made it more of an analysis of mental illness or, if they elected to keep the comedy, selected a better duo and a funnier dialogue to execute it better. Oh, and minus the cliches of course.

On the Count of Three made its premiere at Sundance 2021.