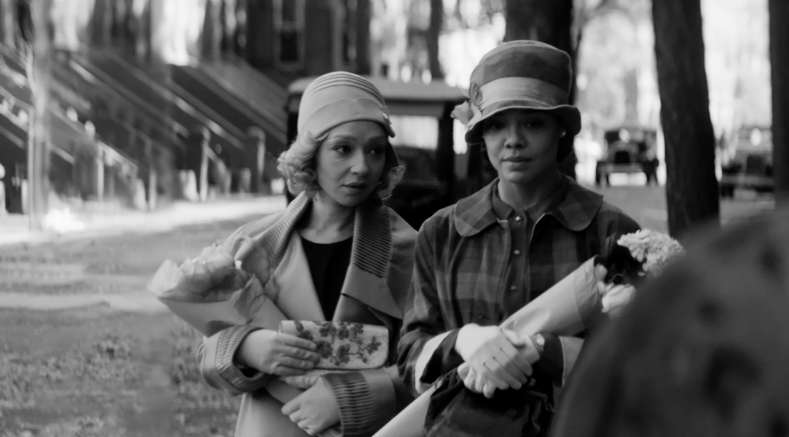 Filmmaker Rebecca Hall presents a story about the nuances of colorism and the ambiguity that surrounds it in her latest film Passing.

Based on the adaptation of the novella of the same name, Passing scrutinizes the lives of two Black women, Irene Redfield (Tessa Thompson) and Clare Kendry (Ruth Negga), living during the Harlem Renaissance in 1920s New York.  While both women can easily pass as white with their light skin and fine hair, each decides to live on the opposite side of the color line in Manhattan. Irene lives uptown in Harlem with her Black husband Brian (André Holland) and occasionally passes out of convenience.  Clare has completely erased her Black identity and passed for white. She lives downtown with her white husband John (Alexander Skarsgård), who has no idea about his wife’s ethnicity.

One day while visiting the grand tearoom of the Drayton Hotel, Clare spots Irene and immediately recognizes her. Clare and Irene knew one another from high school and the film takes us on a journey to where these two women play catch up and unearth more than what they could have ever imagined from each other.

As Clare and Irene settle into Clare’s suite, she introduces her to John which is an incredibly uncomfortable moment for the both of them and that’s putting it mildly.  As it turns out, John is a racist with a hatred for Black people and isn’t subtle about it in the least. It is at this point that Irene realizes she has overstayed her welcome and is ready to leave as soon as possible.

Irene sends a letter to Clare and because Clare was turned off so much by the exchange, she ignores Irene’s correspondence.  However, Clare shows up at Irene’s Harlem brownstone and inserts herself into Irene’s life; it changes the trajectory of their relationship forever.

What Passing commits to do is explore the dichotomy between these two women and their respective paths they have chosen as Black women that have a certain level of privilege. Irene is restrained and has this preoccupation with being an upstanding citizen, and a need to be there for her community.  Clare is a bit more free spirited with a need to leave the restraint that has chained her up for so long — living this lie as a white woman and exploring her Blackness.  Passing also sheds light on the upper class Black experience of a family living with a maid to help serve their needs. A unique depiction indeed to see that in cinematic form from this time period.

Hall deliberately chooses nuance in this film as opposed to a ham-fisted approach to storytelling. These women have a deep connection to each other that goes beyond friendship. In a Q&A shortly after the world premiere, Hall also discussed how the use of filming Passing in black and white as opposed to color was to further expand on the grey areas of life.

ALSO READ
Sundance 2023 Review: 'To Live and Die and Live' Profiles a Struggling Filmmaker Drinking His Sorrows Away

“It felt conceptual to depict a film about colorism and drain the color out of it.” – Rebecca Hall

Hall also was deliberate in the use of sound being expressionistic throughout the film.  Sounds such as birds chirping, glasses clinking, and chatter from next door neighbors through thin walls.

The pacing of Passing does lose its momentum at moments and just as the color was drained from the celluloid, so was the charisma at times from the film’s performers. While Thompson and Negga overall did an incredible job with carrying this complex story, I’m not sure this is a film that would resonate with audiences for several years after it is released.

The tragic mulatto trope did not play out in Passing (thank goodness), in fact, as the story evolves, it becomes less about colorism and these women passing and more about their complicated relationship and the sphere of those around them.  One woman is trying to liberate herself, while the other is trying to stay suppressed. There are cultural dynamics at play here that are more universal than specific to the Black experience or being biracial. Passing also touches on other identities such as the queer experience, while although it is not unpacked too deeply in Hall’s film, it does intersect with the two protagonists’ journey as they are trying to figure out who they are to themselves and to each other.

One component missing from the film’s story was Clare as a mother. While we never see Clare’s children, Irene’s children are very prominent in her narrative.  In fact, a pivotal scene that exposes Irene’s issues with suppressing her Blackness is when she refused to allow her husband Brian to expose them to the atrocities of racism. It is in this that we really see how she uses her light skin privilege as a shield, not only for her but for her family.

There are elements of the film that felt like they were missing and as the viewer, I just couldn’t quite put most of the pieces of the puzzles together in Irene and Clare’s story.  Passing serves as a character study for the lives of these two women as opposed to metaphorical or even literal composition on the issue of colorism.

Passing made its world premiere at Sundance 2021.