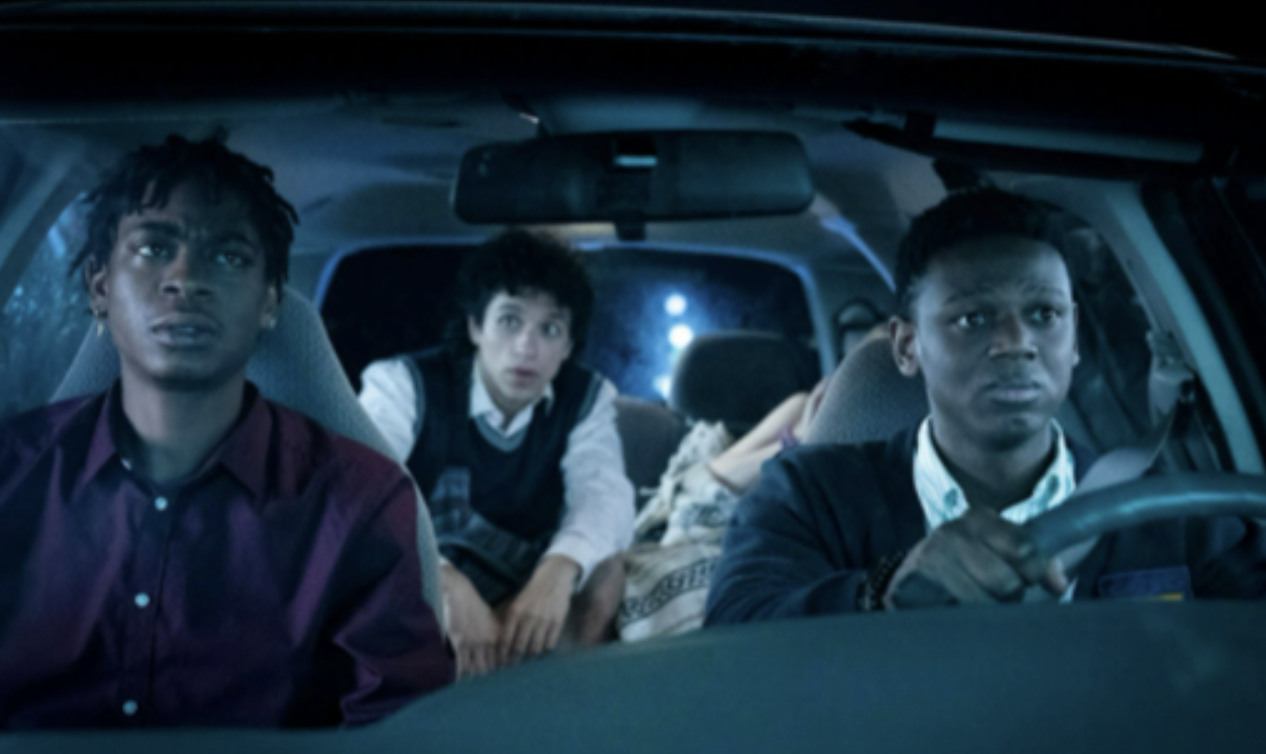 Director Carey Williams returns to Sundance again this year with his amiable second feature Emergency, making it his first Dramatic Competition debut at the festival. Last year, his movie R#J, an imaginative take on Shakespeare’s Romeo and Juliet, premiered under NEXT programming at Sundance. The whimsical film went on to play a few months later at South By Southwest (SXSW).

The narrative feature Emergency is not new to this publication. In fact, I reviewed the short film version of the same name when Williams’ film was featured among several shorts at the American Black Film Festival (ABFF) in 2018. The short film also won the Special Jury Award at Sundance in 2018.

What happens when an unconscious white girl is found face down on the floor in your apartment? For Kunle, Sean, and Carlos — three men of color — this predicament places them in an ill-fated situation. Should they call the police for help? Or try to get her to a hospital on their own? Emergency takes us on a series of misadventures that leads to some stunning conclusions.

Kunle (Donald Elise Watkins) is your total brainiac straight-A student who is on the fast track to pursuing his advanced degree. His priority is making sure his thesis is intact, and he dresses like he’s ready to attend Sunday church service. Meanwhile, Sean (RJ Cyler), a bit of a ne’er-do-well free spirit, is determined to complete the school’s frat party legendary tour. In the midst of their tour, Kunle realizes his lab cultures, which require refrigeration, are not properly sealed and must head back to the science lab. Otherwise, his entire thesis will be ruined. However, a very convincing Sean persuades him to go through with the tour. On their way home for a quick retreat before heading back to the lab, Kunle and Sean’s worst fears are imagined. A random white girl is found passed out in their home. Their Latino roommate Carlos (Sebastian Chacon) is preoccupied in his room playing video games, completely oblivious to his surroundings.

A story like this would seem pretty harmless in a situation involving white college students.  However, with two Black college students and a Latino living in a state-sanctioned violent society where cops shoot before questioning and Black Lives Matter, Emergency’s narrative poses serious risks to these characters.

The film’s 105-minute running time was able to properly expand upon what set the stage for the 11-minute short did in 2018.  Kunle’s initial response to seeing the helpless girl on the ground who slowly starts to wake up and begins puking on the floor is to think they should call 911 and ask for help. Meanwhile, Sean is completely against the idea of any law enforcement intervention. My criticism of Williams’ short was that the film never got to scrutinize why Sean was persistent with refusing to have the cops involved, regardless of the fact that the girl was in a life-threatening situation. However, in this story, Sean’s character development gives credence to his actions, which play out well throughout the film. Sean’s drug use and his need for social circles align with how he copes with his mental health, which plays well into Emergency’s plot.

The frat party legendary tour scenes evoked some incredible cinematography. The bold, bright and vibrant colors reflected warm and cool hues that were not only attractive to look at but gave some tonal messaging about each room and Sean’s state of mind about those rooms. Sean paces in a fugue state in these scenes, adding further context to his character.

There are some mordantly hilarious scenes in Emergency that will likely have viewers talking about them long after the movie is over. During class, Kunle and Sean are listening to their white British professor carelessly use the n-word, and the text appears in large bold letters on the classroom projector. The professor then asks Kunle and Sean to speak candidly on how the word is so triggering and assures them that this is “a safe space.”  And if you’re a Bee Gees fan, you may get a kick out of an amusing riff of “Staying Alive” in another hysterical moment.

The actors are compelling to watch and are distinct in their respective roles.  These aren’t one-note performances here. In fact, it’s hard to even believe these three guys have anything in common. Sebastian Chacon, who plays Carlos, looks like a super-young version of Adam Sandler and kind of sounds a bit like him too. He’s not going full ham with the comedy, nor are Watkins and Cyler who both have excellent chemistry. When the temperature rises and the movie goes from deliriously garish comedy to a dark and harrowing drama, Watkins, Cyler, and Chacon have the range to explore the opposite sides of each genre. This range adds plausibility to the motives of these characters as well.

Writer K.D. Dávila, who also wrote the short film of the same name, keeps the storytelling multi-layered, filled with levity, and not too heavy-handed with its messaging.  While the backdrop of Emergency is riddled with humor and comic relief, the core of its story has a serious and poignant message about racial relations and law enforcement.  There were moments in Emergency where I found myself filled with anxiety, laughter, and sadness. It took me through a whirlwind of emotions, and I cared about these three college kids until the very last scene.

Emergency made its world premiere at the 2022 Sundance film festival.