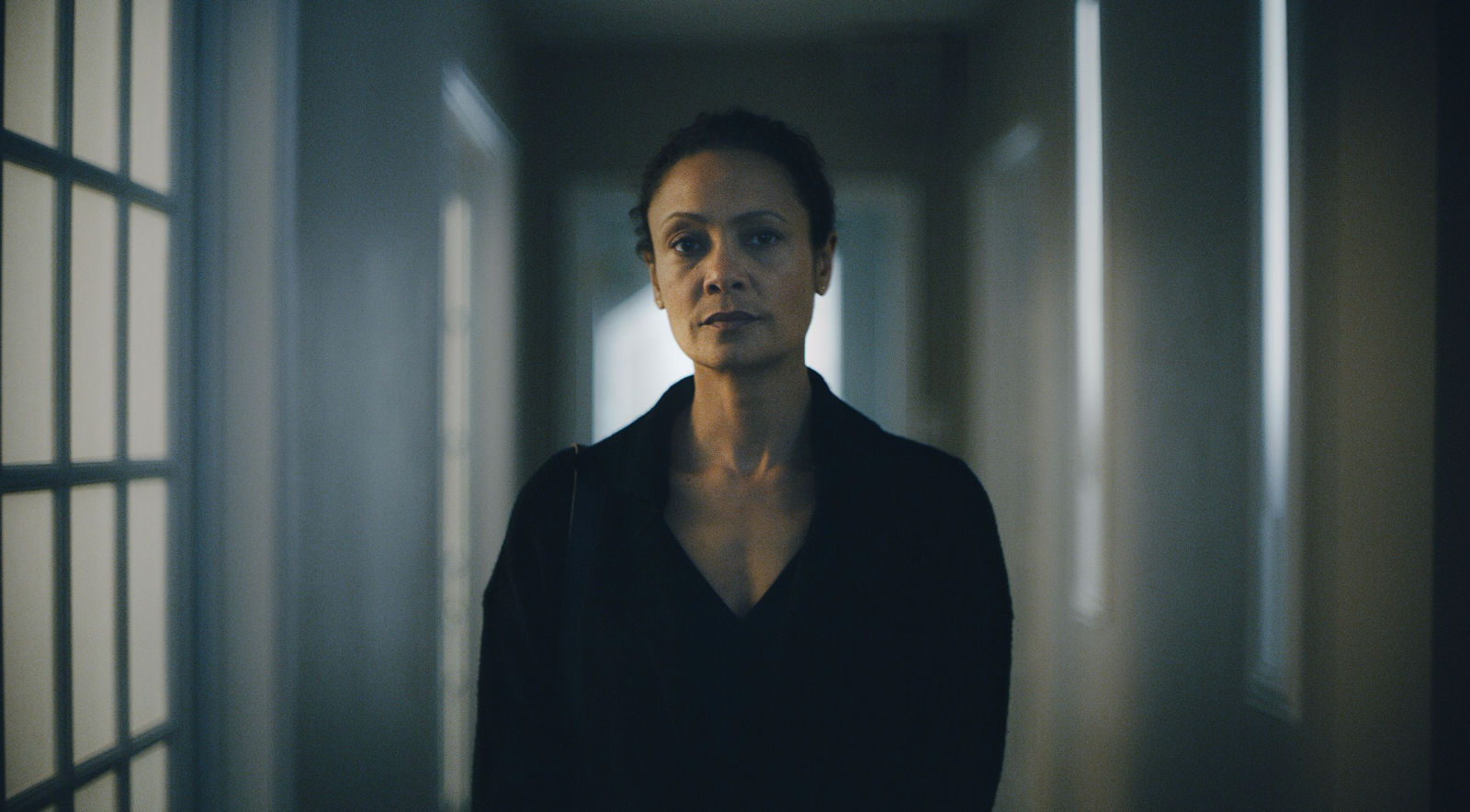 Man, God’s Country got me in the gut.

Sandra Guidry (Thandiwe Newton, Westworld) is a college professor living alone in a small Western America town. Returning from burying the ashes of her recently deceased mother in the wilderness that is her backyard, Sandra sees an old red pickup truck used by two local hunters on her property. She leaves a polite note on the windshield requesting that the hunters not park on her property.

You would think, in a small town in middle America where the rights of landowners are fiercely protected and folks are supposed to be neighborly Christians, the men would respect Sandra’s property and move on. But this is America, Sandra is a Black woman, and the men she’s dealing with are white.

From the moment I saw Sandra’s reaction to that ancient pickup truck in the stark winter landscape, my blood ran cold. I instantly thought of Emmett Till and wanted to run into the movie and beg Sandra not to go there. But Sandra is fifty levels beyond tired, and this is the stand she must take. Thandiwe Newton’s courageously unapologetic embodiment of Sandra is mesmerizing. She is not just an actor — this woman is a force of nature.

God’s Country is a masterclass in filmmaking. Co-writers Shaye Ogbonna and Julian Higgins have crafted a captivating 21st century thriller that mirrors an America constantly on the cusp of conflict. The calm fury that lives behind Sandra’s eyes is borne of years of “tired,” balancing caring for her terminally ill mother, working at an all-white college, and living in an all-white town. She just wants to be home to grieve alone with her dog, and these two white men arrogantly disrupt her peace.

It is refreshing to see a film where the protagonist is a single, child-free Black woman. Sandra isn’t a mother protecting her children, she is a daughter protecting her property in a country where 156 years earlier she would have been considered to be property. The outside world melted away and I was riveted to the screen. God’s Country “shows” instead of “tells,” and through silence, tension gradually builds to a spectacular emotional crescendo with an impressive resolution.

Without using any flashbacks, Ogbonna and Higgins subtly reveal that Sandra was her mother’s sole caregiver. Being the sole caregiver to a terminally ill mother makes you weary. Sandra’s relationship with her mother has many intricate layers of complexity I immediately recognized. I took care of my terminally ill mother on my own, until she passed away seven months ago. I felt Sandra’s emotional state deep in my bones. She hasn’t even had the chance to grieve, and these men have the gall to violate her space.

That’s the thing. While race is a social construct created by white people to preserve the American caste system, Black people have to continuously, from the cradle to the grave, navigate living the consequences of race on top of dealing with life’s natural traumas, like sickness and caring for our elderly parents. We constantly have to manage the possible foolishness of white strangers. Black folks can be going along minding our own business, and some random white person will just step into our personal space and exert the imaginary authority of being born in white skin. Society expects Black folks to humbly back down and sing “we shall overcome,” be beaten down, or worse. Sandra doesn’t back down. She has got steel in her spine, and she advocates for herself, demanding that her rights as an American and a landowner be met.

Everything about Sandra embodies freedom and liberation. She is a badass animal lover who chops her own fire wood, lives in the middle of an isolated canyon, and goes on long runs in the woods — at night — on her own, in a town filled with white people. Even with this superhero status, each time she responds to the hunters she takes time to think before taking action, knowing there will be consequences to deal with. Her direct confidence intimidates each white male character with whom she interacts. Kudos to actors Joris Jarsky (Little Things, HBO) and Jefferson White (Yellowstone, Peacock) who play the hunter brothers Nathan and Samuel. Jeremy Bobb (The Knick, HBOMax) plays Gus the interim sheriff, and Kai Lennox (Fargo, FX) perfectly personifies Arthur, Sandra’s boss at the university.

God’s Country is based on the short story “Winter Light” by James Lee Burke. When co-writer/director Julian Higgins (who is white) reached out to his writing partner Shaye Ogbonna to turn the short story into a film and change the main character from a retired white man to a Black woman in her 40s, Ogbonna (who is Black) said he was so excited to write this story that he couldn’t sit down. Shaye Ogbonna is the son of a single mother, and he has imbued Sandra with the compassion, resilience, and need for justice that can only be written by a Black man who grew up protected, loved, and nourished by Black women. That love shines through this film. As a writing team, Ogbonna and Higgins have crafted a tale that hits countless levels of conflict that deal with gender, class, social standing, and location to power in 102 minutes, which flew by.

Sandra is never a victim in this movie, and this is revolutionary. Honestly, I don’t usually like the Black horror/thriller genre. Films like Get Out in which the Black characters are the bug-eyed victims aren’t my cup of tea. I don’t want to go to the movies and see people who look like me terrified by oppressive systems of white supremacy. I have to deal with that every time I leave my house. White America has always been comfortable bullying Black people without having to deal with the consequences of their actions. In this film, I love seeing what happens when Sandra strikes back and escalates the conflict like any human being is capable of doing.

The level of trust required for the actors to tell this story in this way is evident. Julian Higgins’ direction is spot on; every moment has meaning. Very few white storytellers are secure enough to expose the ugly truth of whiteness, but Higgins doesn’t back away from the intricate tentacles of caste.

God’s Country is never preachy or contrived but rings true. I am happy and grateful to live in a time where stories that humanize Black women in this way are finally being told. We are not a monolith. God’s Country is a spectacular film not to be missed.