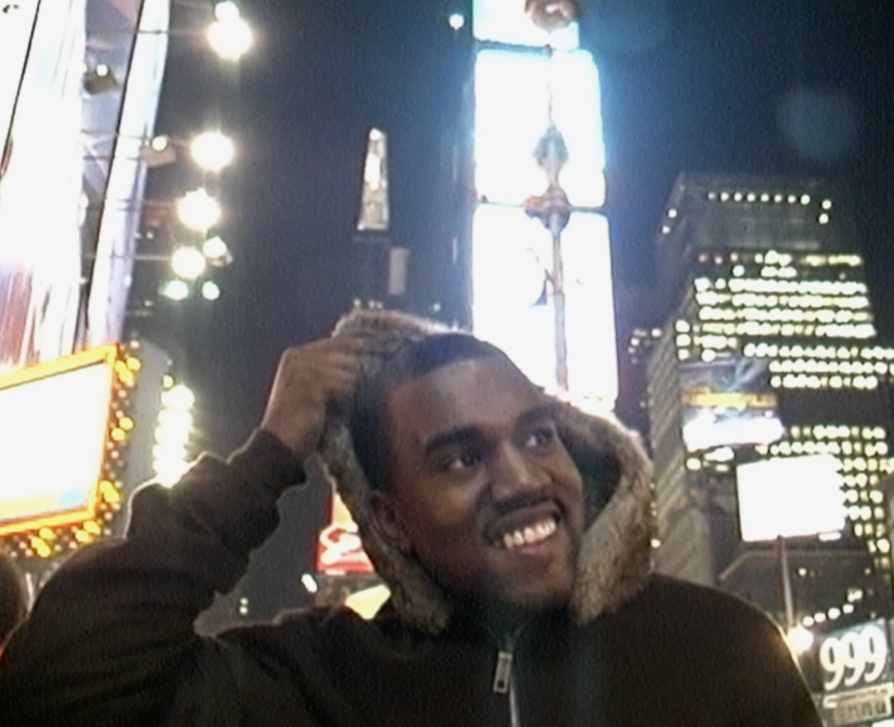 Today, Kanye West is one of the world’s top-selling artists. His talent is undeniable. jeen-yuhs: A Kanye Trilogy is a narrated time capsule that gives us a candid look into Kanye West’s origin story.

Die-hard Kanye fans will probably love this documentary. For anyone else, the film is a compelling look at the provocative star’s journey to stardom.The project began at a party in 1998 when Clarence ”Coodie” Simmons, a Chicago access TV show host/comedian, films Kanye West. The two hit it off and Coodie, inspired by the documentary Hoop Dreams, decides he wants to make a documentary of Kanye West as he pursues his dream. Now that is some serious swagger. When they first meet, Kanye is gaining acclaim as a producer but he is ready to have a career as a rapper and hip-hop artist. West is compelled to move to New York City and Coodie decides to follow him to continue the documentary.

The early footage is clunky and grainy, and everyone is posturing and hamming it up for the camera. As time goes on Kanye West and his crew become accustomed to being filmed and Coodie’s skills as a cameraman improve. This documentary is a time capsule with a behind-the-scenes move to 23-year-old Kanye West’s apartment in Newark, New Jersey. His relentless work ethic is admirable. His apartment is filled with other rappers, all transplants from Chicago who have formed an artists community in New York. All are focused on fame but not quite like Kanye. His drive is unmistakable even at that young age. He’d been focusing on music since he was in the seventh grade. West is establishing himself as a gifted record producer in New York City and has sold several hooks to rap artists including Jay-Z. But West is determined not to just create the beats; he wants to be on the mic rapping. But he can’t nail a record deal, and he’s frustrated. West is an innovator, and his musical message is not gangster rap, which was wildly popular at the time. No one wants to sign him.

I’ve never been a fan of Kanye West, don’t like his recent politics, and I’ve never consciously listened to his music. What Part 1 of the documentary did well for me was to introduce me to young Kanye West’s unique original vision. A moment that softened my heart towards young Kanye West was when Kanye and his crew show up at Roc-A-Fella records and get into some of the administrative offices. They pop the CD into the boom box, and his song All Falls Down (which samples Lauren Hill’s Mystery of Iniquity) plays. Kanye West takes his retainers out of his mouth and starts performing right there in the office. One of the women working at her desk looks at him blankly as he performs his heart out. He goes to another office and plays the song for another woman, who at least cracks a smile and bops her head a little to the beat but stops to greet a co-worker who enters the room. Kanye looks straight into the camera exasperated. This footage is surreal. A few years later this song will be nominated for a Grammy from his first album for Roc-A-Fella records.

Directors Clarence “Coodie” Simmons and Chike Ozah along with editors Max Allman and J.M. Harper do a phenomenal job crafting a compelling narrative out of what must have been thousands of hours of footage. The editing of the film is proficient and succinctly lays out a narrative that hits all of the emotional triggers to root for this young man. jeen-Yuhs: A Kanye Trilogy Part 1 shows the grit, determination, resilience, laser focus, and support it takes to realize a dream as a recording artist in America. Nobody gets anywhere without emotional support.

The most painfully beautiful part of jeen-yuhs is when Kanye West goes home to Chicago for a gig and takes time to visit his mother Donda. Until this moment there is a low grade frantic tense energy emanating from West as he pushes to succeed. Each rejection takes a toll. As soon as he walks through the door of his mother’s apartment you can just see his entire physicality relax. The beauty of Kanye West radiates as he sits at the kitchen table remembering lyrics of one of his songs that Donda loved. She was so supportive. Her voice is nurturing. It’s obvious this man was grown in love. He tells her that he’s going to be featured on a program on MTV. “Can you believe it?” he asks. She answers, “I can believe it, the way you work. You play tracks like Micahel Jordan shoots free throws. Anybody that does something that much and that long and is that good, it’s gotta pay off. You can’t go over there and do nothing but blow up. ” I was struck by her unconditional love and how she authentically respected his talent as an artist. She loved that boy with all her heart and understood how to grow an artist. It’s plain to see he wouldn’t have achieved all that he accomplished, in the way that he accomplished it, without the love and support of his mother.

The creative team of this film have created a conundrum for me. Am I being manipulated into  to giving Kanye West a pass for past recent behavior I find deeply harmful because some people think he is a genius?  Kanye West is an extremely complex individual. I have mixed feelings about this documentary.

jeen-yus: A Kanye Trilogy is a candid look into Kanye West’s backstory that gives the audience a new perspective of an icon we thought we knew everything about. Part 1 premiered at Sundance Film Festival 2022.