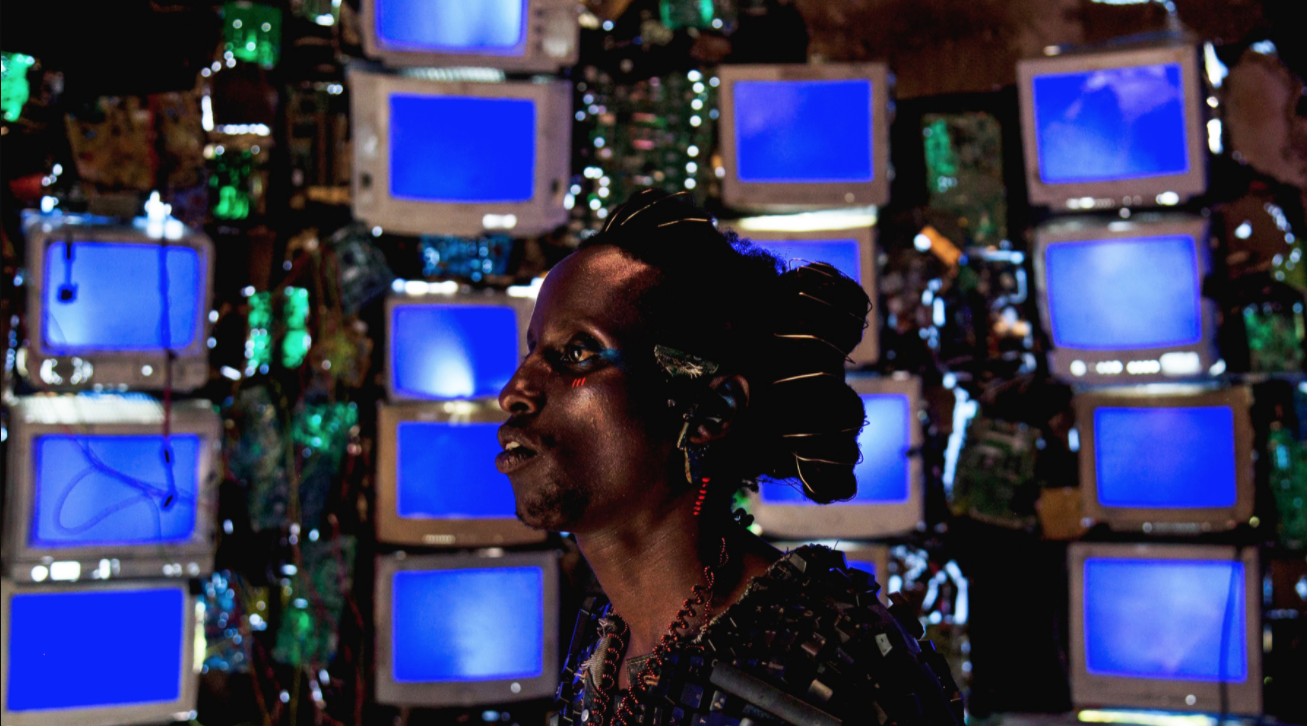 Film can be an extraordinary exploratory, creative platform. It can be used to make the most upsetting themes and topics digestible and accessible to the masses. Neptune Frost is one of those experimental, inventive films that people will talk about, but the conversation may be all over the place.

This film touches on so many topics and themes that honing in on a select few might have made it a stronger film. But the overarching umbrella of Afrofuturism provides counter-narratives to stories and experiences that imply Black people do not belong, affirming Black existence in the realm of technology, love, and anywhere else we decide to be.

Neptune Frost is a collaborative feature film by Anisia Uzeyman (Dreamstates) and slam poet/filmmaker Saul Williams. It is produced by Ezra Miller. The film is about an intersex African runaway named Neptune trying to find their way through the universe. They meet a grieving African miner who just lost his brother. Their union starts a technological marvel called Martyr Loser that extends across the globe. Written by Saul Williams, the film stars Cheryl Isheja, Elvis Ngabo “Bobo,” Bertrand Ninteretse “Kaya Free,” and Eliane Umuhire (Trees of Peace).

It’s no surprise the film was written by slam poet Saul Williams. It has a poetic, metaphorical nature to it. To be honest, I didn’t start to comprehend what was happening until near the end, and even then I feel like my interpretation of the film will be different from others that view it. This is never a bad thing. Poetry was never my forte, but I can still appreciate its artistic value.

Neptune Frost is a performance of words and visuals. It’s a visual album of sorts. It would be nice for Neptune Frost to be the visual companion to something else that is more straightforward. As a stand-alone film, its message may not get across as intended. It’s a talking piece, a dialogue starter, as most art pieces are. It warrants a second, maybe even third, viewing to create a nugget of understanding. The musical portion of this film by Williams is profound and makes its stand near the end of the film when the lyrics don’t hold back any sentiments.

Another component of this lyrical film is its use of colors. Two that stand out are orange and purple. Color meanings in film can have a strong effect on the audience’s reactions. I think of the green in The Matrix or the orange and yellow in Blade Runner 2049. In Neptune Frost, orange gives us transformation, emotional endurance, and motivation in dark times. The purple in the film highlights ambiguity, innocence, sensuality, and relates closely to femininity. The character Neptune as well as others is embellished with pops of purple or orange, be it eyeliner, a dress, or their environment. It’s an artistic element that shows the artistry and construction of this film.

The cause for applause is the sincerity and lack of doubt on who this film was created for. The intentional presentation is praiseworthy. It is a true celebration of Afrofuturism. There are themes of art, science, and technology through the Black lens. While the idea of “otherness” is explored through the eyes of an intersex character, there is a distinct appreciation and celebration of the different. The digital divide, alien or “otherness,” and the reclamation of culture are all explored in the form of African miners who dig for the rock that builds the technology we all consume. We live in a world today where the internet is constantly “winning.” It’s nice to see an example of overthrowing that construct by the joining together of Black people.

Who would have thought that a musical, science fiction, hybrid set in Rwanda would be the epitome of Black power? Neptune Frost highlights the people while also poking a stick at the injustices and struggles Black people face around the world. Power is energy in a world where technology reigns by the exploitation of Black people. In Neptune Frost, some try to delete what they don’t understand or take advantage of it. The film is riddled with strong character names like Innocence, Psychology, Memory, and Tekno — clear illustrations of the power that these Black people have, but also how they can be corrupted by people, the media, and technology. No matter what the world throws at Black people, they/we will keep going.

Another topic this film embraces is love: love of self, your whole self, and love for others. The main character Neptune is an intersex hacker on the run. The character is played by two people, first Elvis Ngabo, then Cheryl Isheja. The transition works and is celebrated in the film. There is this idea of acceptance with Neptune as they say they were born at 23, the point at which the character takes control of their life and allows themselves to fully embrace who they believed they are, red dress with black heels and all. It is an emotional journey that finds a happy ending with a miner whose connection is stronger than anyone could have foreseen.

Neptune Frost evaluates the past and future to create better conditions for the present generation of Black people, like any good Afrofuturism piece should do. The film imagines greater justice and free expression while giving a good, strong middle finger to the corporate conglomerates that seem to be diverting the attention of the masses today.