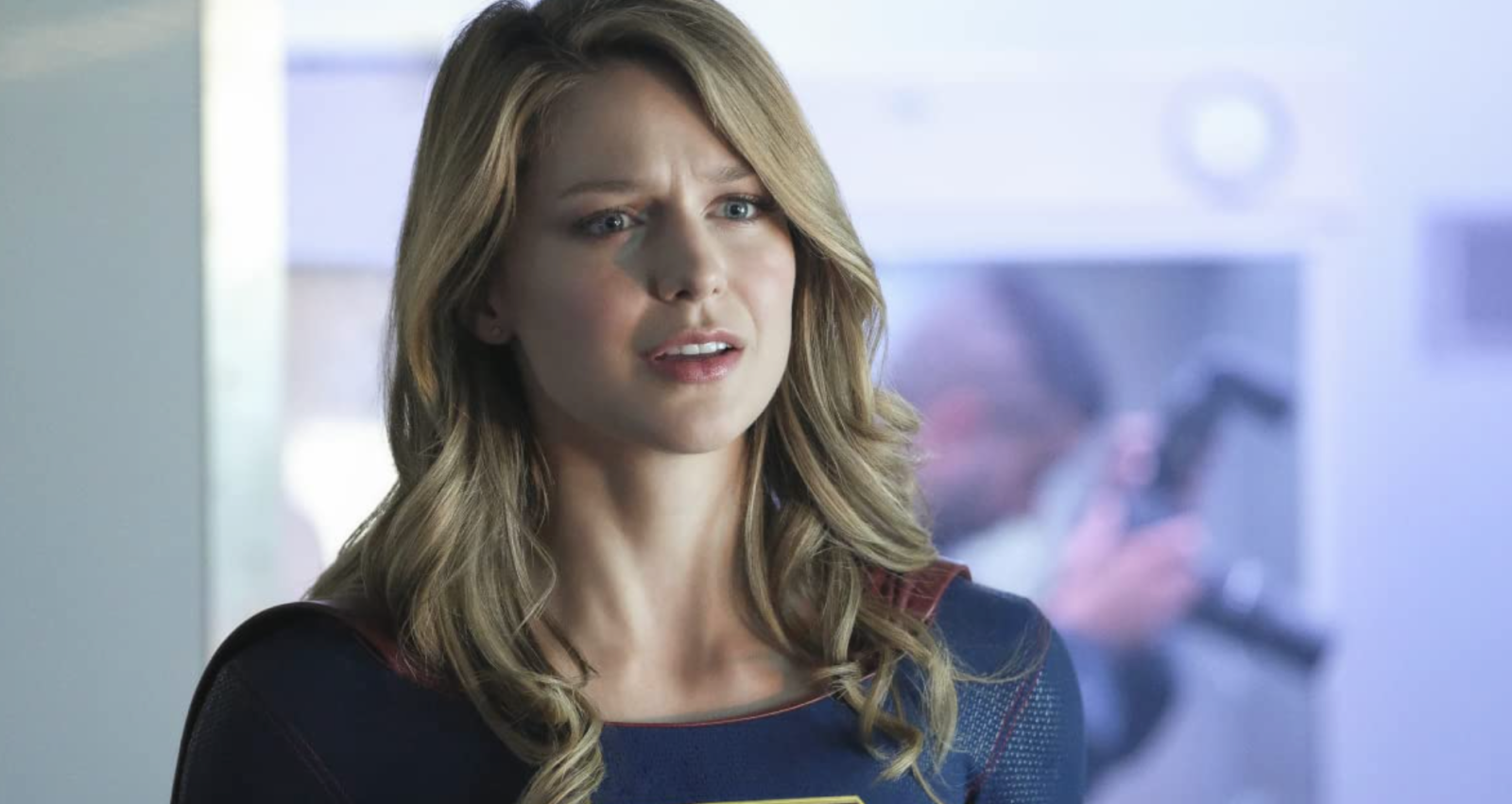 The first hint that the Supergirl portion of the “Legends of SuperFlarrow” crossover wouldn’t really be part of the crossover? The title is “Medusa;” the other shows all share the title “Invasion.” SMH. Still a little upset about that.

However, this episode was also the mid-season finale, so it had a lot to manage in one episode. Let’s get into it.

It’s Thanksgiving at Kara’s house, and all the usual suspects are there (except for J’onn, this is the second time in a row, what gives?), and Mama Danvers is back! Mon-El is on a mission to mate (lol) and tries to get on Mama Danvers’s good side while Alex tries to come out to her mom.  Just when Kara is about to cut the turkey, there is a brief disruption in the space-time continuum.

Kara decides to interview Lena (in an attempt to be sneaky) to figure out what Cadmus is up to. Lena abruptly ends the interview (suspect) and immediately calls her mother (even more suspect).

Cyborg Superman infiltrates the alien-friendly bar and sets off a smoke bomb killing all the aliens inside except for Mon-El who followed him out in the nick of time. The DEO quarantines Mon-El because he was exposed and Alex suggests bringing back Eliza (Mama Danvers) to study the astrobiology of the gas.

Due to his odd behavior, and thoughts planted by her mother, Kara asks Mon-El if he has feelings for her, Mon-El laughs it off telling her no (liar). His laugh turns into a coughing attack causing him to be hospitalized.

Mama Danvers figures out that Mon-El’s ailment is a Kryptonian virus, and Supergirl realizes that Cyborg Superman must have used her blood to get the virus from the Fortress of Solitude. So Superman was just chillin’ with a bioweapon in his hideout? Bro, this is why people don’t trust you! She goes there to figure out what happened. When she arrives and asks Kal-Ex for information, it tells her she’s an intruder and attacks her.

Kara destroys Kal-Ex (RIP) and learns about Medusa. This is a weaponized virus that Kara’s dad created (her parents are low-key terrorists) to attack all alien life but Kryptonians.

Alex is still struggling to come out to her mother, and her mom can sense the awkwardness. Eliza asks Alex what’s wrong, and Alex tries to tell her, but she just can’t. Luckily for Alex, her mom is completely in the know and is totally cool and accepting of Alex being gay.

Meanwhile, Kara is trying to come to terms with her parents’ difficult decisions to defend and save their planet and talks to J’onn about it. J’onn’s physiology starts changing mid-discussion, and he tells Kara that he’s turning into a White Martian. Kara tries to get J’onn’s help, but he tells her that his issues aren’t the priority right now.

Alex, Mama Danvers, and Winn figure out that Cadmus needs an isotope to use the super virus against all the aliens in National City. An isotope that L Corp happens to have. Kara goes to stop Cyborg Superman from getting the isotope, and another rip in the space-time continuum saves her from death. In the middle of their fight, the cops show up, and Maggie is hit by a stray bullet but survives.

Eliza questions Lena Luthor’s motives, and Kara agrees to fly to L Corp and investigate. Supergirl tells Lena that her mother is the head of Cadmus, but Lena doesn’t take it well.

Supergirl leaves Lena in an angry mood, but not before encouraging her to be her own hero.

Kara feels guilty because Mon-El is slowly dying, but he tries to comfort her by letting her know this isn’t his first time escaping death (which feels like it’ll be important later) and kisses her.

Lena contacts her mother again and questions her involvement with Cadmus. Instead of calling the cops or being disgusted, she tells her mom she wants in.

Cadmus goes to National City port to release the virus because it will disperse best. Kara and Hank go to stop them (even though Hank will die), but they are too late. Lena turns the key, and the rocket with the virus is released. Supergirl goes to stop the rocket, and Martian Manhunter fights Cyborg Superman (Hank versus Hank!). The rocket explodes… and nothing happens.

It turns out Lena saved the day by giving her mother the wrong isotope and calling the cops. Her mom gets arrested, but the real Hank Henshaw escapes.

There are a group of aliens (Daximites?) looking for Mon-El who is okay thanks to Mama Danvers who cured him and Hank. Kara asks him if they’re going to talk about their kiss, but Mon-El pretends to not remember and Kara drops it.

Maggie brings Alex a pizza (I wish my crush would bring me a pizza) because she realizes after her near-death experience that she wants to be with Alex (honestly, this kind of cheapens the moment, I find the near-death trope insulting to the previously rejected person).

Barry and Cisco come through the time rip (FINALLY!!) and ask Kara to help them with… to find out you’re going to have to read the next 3 recaps as part of the 4 DAY CROSS OVER EVENT!

This was an okay episode plot movement wise but it totally knocks out the Big Bad (that being Cadmus) unless they’re like Hydra and another head will take its place. However, it barely tied into the crossover and solved all the issues we were currently dealing with.

Supergirl will be back in January.

When Punching Nazis in The Face Is Not Enough: Why the Arrowverse Crossover Event Failed Its Heroes on ‘The Flash’