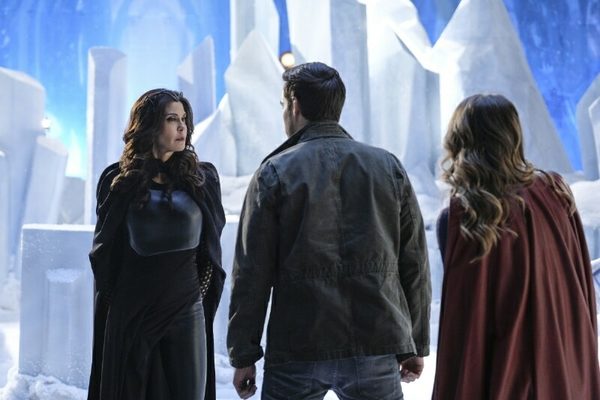 Last time on Supergirl (before the really long break), the show really drove home this theme of Kara and Mon-El’s “forbidden” conflicting worlds relationship theme — almost pulling a Romeo and Juliet in the process.

To make up for being an ass-hat last week, Mon-El has stepped his boyfriend level up to like 98% (which probably means they’ll be together for a while) and makes her breakfast. They spend some time together before getting interrupted by an alien attacking the city. Kara beats him (obvs) but when they get back to the DEO they find out that there’s a hit out on her.

J’onn benches Kara from helping in the search to find out who is trying to kill her because it’s too dangerous. Mon-El asks his parents to meet him at his job and then proceeds to straight up accuse them of taking a hit out on Kara. They deny it and beg him to return to Daxam, again.

Meanwhile, at Kara’s apartment, Kara, Winn, and James are playing Settlers of Catan (which seems pretty boring with just three people) and Kara is going out of her mind with boredom. Mon-El shows up and tells the others about him questioning his parents. In the middle of them dissecting whether Mon-El’s parents are their perps, Mon-El is attacked mentally by a telepath that forces him to attack Kara. The two fight and Guardian jumps in — and is promptly shoved out — to help. Winn catches the telepath with a stapler, and they bring him in.

J’onn and the telepath have a telepath off and J’onn wins, the other guy caves and reveals that the Daxamites were the ones to set the bounty. Everyone thinks they should attack their ship, but J’onn shuts them down because the President ordered him not to get involved with the ship.

Kara and Mon-El are cleaning the window he broke when Mon-El suggests they run away like Romeo and Juliet (because theirs is also a forbidden love story GET IT) Kara shuts him down by letting Mon-El know that the two die at the end (spoiler alert!) and suggests strongly that they should talk to his mom.

Mon-El contacts the ship and they meet up with his mom in the Fortress of Solitude. Mon-El asks his mother to call off the bounty, for the sake of their relationship, but Mama Daxam isn’t having it. Kara gives an inspirational speech (so on brand) but Rhea still isn’t having it and attacks Supergirl with a Kryptonite sword.

Kara tries to fight her, but is stabbed again, Mama Daxam is ready to kill her when Mon-El stops her by agreeing to go back to Daxam to save Kara’s life. Kara flies back to the DEO and fills J’onn and Alex in on what happened. She wants to go and save Mon-El’s life, but J’onn forbids it as the plan goes against the president’s orders.

Mon-El demands as a condition for his return that his parents need to be better leaders. His parents disagree with him, his mother so much so that she sentences him to ship-jail/time out until they get to Daxam (in four years).

Winn recalculates the portal from episode nine so that they can be transported on the Daxamite war ship. Supergirl and Winn show up, Supergirl to distract Rhea and Winn to break Mon-El out of jail. Supergirl and Mon-El’s mom fight and she tries to stab her only to reveal that “she” is Martian Manhunter. Winn breaks Mon-El out of jail and Kara goes through the portal to help J’onn. Mon-El’s parents, Supergirl and J’onn fight, with Rhea determined to kill Kara. Mon-El and Winn go to help them, and in a snap decision, Mon-El breaks a window in the ship causing a vacuum that almost sucks his parents into space.

Mon-El’s dad realizes that his son chose his girlfriend over them and lets Mon-El go much to his wife’s dismay. J’onn gets chews out by his boss (the President) for not obeying her orders but he isn’t fired. It’s revealed (again) that the president is an alien.

Mon-El’s parents are looking at Earth as they fly away. And Mon-El’s mom tells his dad that he has betrayed her, his family and his planet. He tells her that they’ll work through it and that he’s still by her side, and instead of thinking maybe he’s right… she kills him and vows to return to Earth.

After going to a yoga class (relationship goals tbh) Maggie and Alex run into Maggie’s ex, Emily on the street. Maggie and Emily have a semi-awkward conversation when Alex has the (terrible) idea to invite her girlfriend’s ex to dinner with them so the two can catch up, to which Emily agrees.

Maggie and Alex arrive for their dinner date with Emily, and she is 45 minutes late. Alex is embarrassed because Emily totally bailed and because she was really hoping that Maggie would get closure.

Alex finds Emily and tries to find out why she bailed on dinner. Emily divulges that the reason her and Maggie broke up was because Maggie cheated. Alex (and frankly I) are shocked, and leaves Emily standing there.

Alex confronts Maggie for lying and her tendency for keeping things to herself. She lets Maggie know that she doesn’t have to be guarded with her, and the two make up right before Kara interrupts them with a call for help. Later, Alex makes Maggie apologize/get closure with Emily and the two go on their way.

This episode… this episode wasn’t particularly captivating but that doesn’t mean it sucked either. The purpose was clearly to establish a new “big bad” with Rhea, which if that means more Terri Hatcher, so be it. I can’t decide if this overwhelming theme of Romeo and Juliet in relation to Kara and Mon-El is foreshadowing or an attempt to make us care about their relationship, but I still don’t. I have accepted the fact that we’re going to have to deal with them being together (which… fine) but I really need the writers to do something with Kara’s career, and with James.

They have done so much with Winn, Alex and J’onn this season, but James is still a two-dimensional character that has barely been fleshed out. As for Kara’s career, if Mon-El actually does love her he’ll encourage her to do more with her life, and I’m saying this as someone who was unemployed for two months.