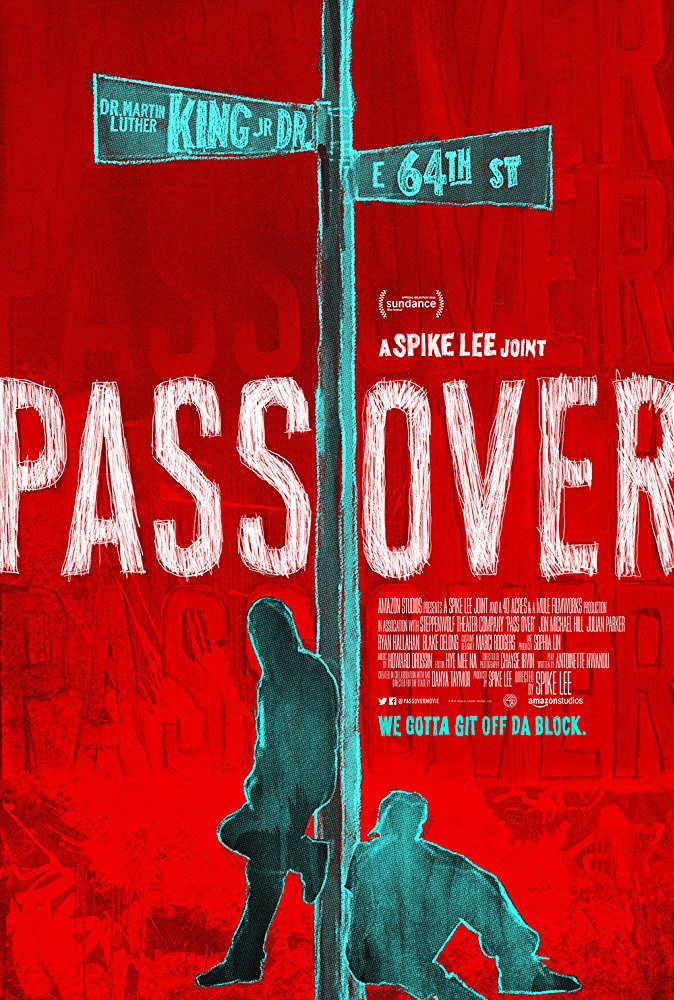 Introducing Spike Lee’s newest film Pass Over, the presenter at the Alamo Drafthouse cited another of his staged performance recordings which previously debuted in that identical spot: the timeless, intimate, and hilariously profound musical on rock and roll and misspent/blisspent youth, Passing Strange. Utilizing a small handful of actors and some dynamic and creative staging, including creator Stew front-and-center as his own one-man Greek chorus throughout, Lee recorded the final performance of the musical and helped rescue it from a complete and total obscurity which it (frustratingly) skirts around to this day. If I was not a fan of Spike Lee’s work (which I most definitely am), I would forever be grateful and indebted to him for this.

Similar in title but a radically different theatrical experience, Pass Over has been frequently referred to as a riff on Waiting for Godot, but about the modern Black experience in America. Two homeless friends spend the entirety of its run-time holding up the tiny corner of Martin Luther King, Jr. Drive and E. 64th Street on the South Side of Chicago–incidentally, the corner is located near the low-income housing complex Parkway Gardens Homes where a young former First Lady Michelle Obama once resided. Pass Over is an absurdist drama which attempts to wring truth from the idle banter of two men whose demonstrated idleness is continuously threatened by errant gunshots, police oppression, and the economic shrapnel of the American experiment, to name a few. There’s nothing essentially outré here in thinking about this subjugation, though there does seem to be something specific being communicated about Blackness and idleness as a nigh-philosophical movement of self-preservation, a unique approach which adds something risk-feeling to the production and the way it plays out.

I have sometimes opined that people enjoy talking about, referencing, and smirkily pointing to Waiting for Godot much more than actually watching it. It’s a kind of experimental bellwether, a “show about nothing,” so-to-speak, but which rings some darkness and truth and horror from the inane. Also, yes, absurd. Yes, humorous, or blackly humorous, sometimes an almost textual slapstick. Grasping and reaching, and masturbatory. Strange and befuddling. Other times, oftentimes, boring, at least for me.

Antoinette Nwandu’s work mirrors many of these aspects, but it also feels cacophonously unfocused and attention-deprived. It’s not a slavish Godot adaptation or anything, and has its own unique beats and points of focus, but very little in the way of subtlety. Moses and Kitch mosey and kvetch around their synthetic little sampled street corner, balancing on scraps of trash as they bellyache and daydream of better lives, somewhat meaninglessly bickering and blathering, tongues freed but always adrift. Their limited agency is manufactured by their station, by their skin color, by their oppportunities salvaged or savaged, by the dense politics of their macro- and micro-environments.

The way they drop every time a gunshot rings out might represent a few things symbolically. It also doesn’t need to, though, with Chicago’s gun violence being omnipresent, complicated, unnecessary to symbolize (and a topic Lee has previously explored as well, and will probably continue to explore), and the image of their bodies pounding the floor, inert and frightened but very much alive, heads craned to the audience–this requires no additional assembly to extract lucid meaning. This frankness in the play is, I think, by design, but it makes for a lackluster viewing experience, and when two additional characters eventually appear and interact with the pair we are given a few more pieces to play with, yet I couldn’t help but find many symbols hackneyed. In one case, Kitch is asked to return some offered food, but secrets away a small, single-serving apple pie and hides it for later. I mean…I think I understand this symbolic offering. But I feel like I get it all, right away, and the straightforwardness of it prevents it from sticking deep or becoming impactful.

Pass Over is not a bad play, or a bad film, I want to make that clear. The cinematography cuts in very close, almost invasively, peering upon an actor laying on the floor from above, or getting down on its knees with its subjects, gesticulating to an unseen, unknown, pervasive but dulled cruelty, an entity better felt and reacted to than detailed in the text. The audience, introduced in mostly-silent vignettes in the introduction and conclusion, present themselves, mostly Black, excited for the opportunity to see this production at the Steppenwolf Theater. The community the film describes and invites understanding of seems extended beyond its minimal cast–that’s where those edges of the story reside, and not, in my opinion, plainly within the text itself. I wanted something more along the lines of Rosencrantz and Guildenstern Are Dead (itself a play with some indebtedness to Godot), but the writing is leaden and overly direct; the exchange of n-words as a descriptor of the multiple opportunities for meaning available to the term and its wielders (a greeting, a stunned denial, an affirmation, a negation, etc) doesn’t feel precisely fresh to me in 2018, as this is a subject that’s been explored many times over and doesn’t immediately grant specific or unique weight to the story. It’s a script detail that fits the theme, sure, but I see Pass Over as, sadly, more rudimentary than revolutionary.

Loping, languid, and maybe less than essential, I’m open to the thought that Pass Over will unlock more of its treasures for me in subsequent viewings, and I’m eager to see more Black critics approach the work in coming months. Luckily, its upcoming digital release as an Amazon Studios production will offer access to its Chicago street corner to an increased audience.