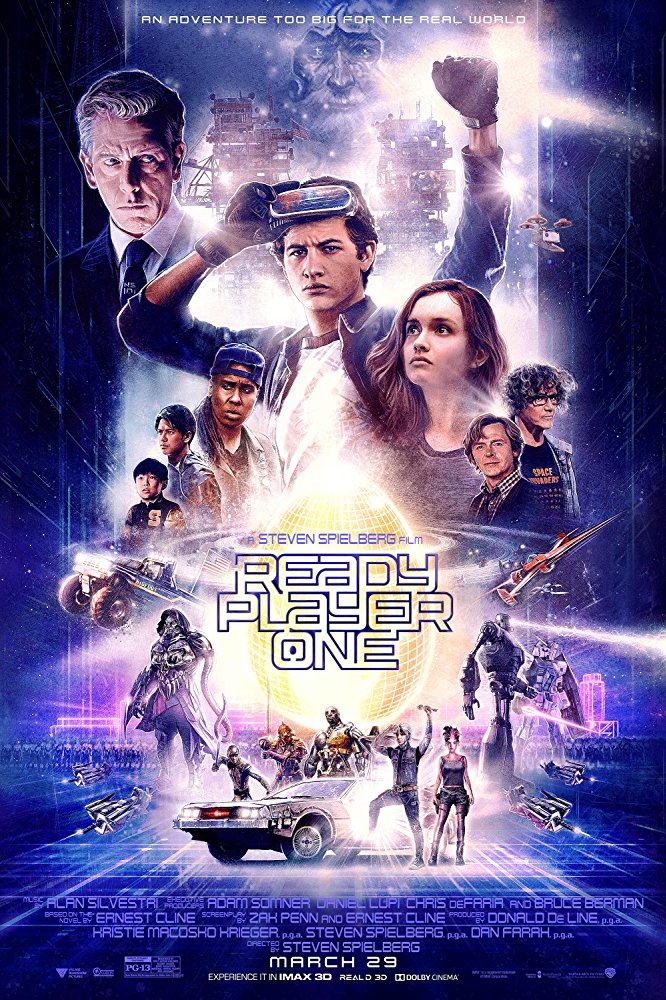 There’s a scene in Ready Player One, Steven Spielberg’s long-awaited adaptation of Ernest Cline’s seminally nostalgic novel, where main character Wade Watts a/k/a “Parzival” remarks on the low fuel supply remaining in his car. He’s about to enter a race with fellow digital roughneck Aech, who waves him off, chiding him for being unprepared, and he pulls out his miniature pocket DeLorean which merrily expands to full-size in the game world. After the race kicks off, destroyed drivers leave behind their riches in the form of hundreds of gold coins, which Parzival hoovers up, transferring them into his fuel line to keep topped up for the rest of the race. This is all communicated in split-second flashes of information–digital fuel is important, people’s lost credits can be claimed by those around them, credits can be transformed into fuel automagically, Parzival isn’t afraid of a risk–but it all flows so easily that I think most people in our audience, gamers or otherwise, were able to grasp and comprehend all that occurred in these brief minutes.

It’s a good way to describe the film in general, this cramming of mechanics and gameplay trappings and character details into the screen in a way that remains lucid. It’s not what I expect from a CGI extravaganza, and while most scenes are fraught with frenetic activity, there is a method to the madness onscreen that is far and away a different beast than, say, the work of Michael Bay. Maybe this isn’t a surprise with Spielberg at the helm but, considering the subject matter, it’s a remarkable crowd pleaser working well beyond its niche.

For the uninitiated, Ready Player One takes place in an economically and ecologically devastated near-future where, although things have gone to shit for much of the population, they are comfortably beholden to the opiate escape of VR gaming, young and old alike. Their living rooms may be damaged chunks of trailer park debris stacked to the sky, but their interior fantasy worlds are considerably more self-directed, rambling through a roaming universe of violence, gambling, and assorted pleasures. Poverty meets escape, in the form of a gameworld known as the OASIS, where various players take part in PvP and PvE escapades. As it is with many MMOs, though, the OASIS contains a compelling metagame underneath its surface, being the search for a digital (-ly literal) easter egg which is accessible via scripted challenges, with players seeking out this grail and its professed riches (it would also render them the new heir and owner of the OASIS) known as egg-hunters, or “gunters” (slight groan).

We’re introduced to Parzival, first in his meatspace identity as orphaned Wade Watts(Tye Sheridan), scampering around The Stacks on his way to his little VR hidey-hole. Wade is essentially any of a million irritating nostalgic-for-the-80s internet fanboys, a quality which is amplified in the book to usually egregious, irritating ends. Here, his interests, while called out in the story as miraculously special, are muted just enough to appear reasonable. I have a much easier time just assuming Wade knows what he’s talking about than reading lengthy interior monologues on the depth of his Rush knowledge as his written character tries to prove it to me.

Actually, time and again this trend in the film connects to my most reliable praise: Spielberg and his team manage to soften so many of the book’s rankest, most obnoxious edges into something pleasantly casual (that word itself is poisonous to “hardcore” gamers btw). It’s never risque, nor is it trying to be, but moments like the reveal of Aech (Lena Waithe, looking like she’s enjoying every minute of this) as a Black woman gamer (a scare-quotes “big f–king deal” in the book) are played very cool and quick, and the plot is more-or-less a speedrun. I never considered that the novel would work this well and in this capacity, but Ready Player One delivers a compelling virtual roadtrip. The tech on display always remains uniquely linked between the real world and the OASIS–doing so much more effectively than, say, Assassin’s Creed, which mined a few similar mechanics–including constant swaps between massive rooms of employed gamer plants running on omnidirectional treadmills and the digital warzones where they do battle.

Where the book and movie align is in their unrepentant clamor for the treasures of our past, which makes its release now, in a time where everything old feels new (or, at least, especially profitable) again, unusually perfect. And while the tools it uses to revive this weaponized nostalgia are bleeding-edge, with dazzling visions of planets full of violent splendor and dozens if not hundreds of moving characters on the screen at once, constantly, it has a readability and focused momentum that continues to engage.Sure, it’s prone to break out into a kind of amplified, wacked-out science fiction war film, and the romantic subplot is unnecessary-to-almost-offensive, but it’s snappy entertainment, and while the little references to real-life games are fun to spot, they’re not the entire reason to attend.

Something about Ready Player One is kind to the inner child. Maybe it’s the revisit of some amazing films, games, and characters from our past (there’s an especially excellent, extended sequence which pays tribute to a film classic that I hope no one spoils for you prior), but it’s also an easy-to-grasp epic about who makes games, and who they are made for. The primary villain Nolan Sorrento, a plutocrat who seeks the egg and ownership of the game world for purposes of pure profit, makes me think of the trending development of micro-transactions by AAA game corporations, constantly seeking out payday whales over meaningful experiences for their players. The OASIS and its creator are a deeply-felt and profound part of Wade’s life, a precious world worth saving for others like him, living in a society from which escape is tantamount to living (is this familiar, yet?), which gives the story some basic but essential stakes.

I didn’t think Ready Player One was going to be right for me, but I was proved wrong. It’s a dazzler, a violent but bloodless cartoon hallucination, an homage to the 80s in some obvious ways, but also an homage to passionate escape, and to considering those escapes as precious and valuable, as part of who we are. The real and crushed fantasy is that knowing exactly how to find the easter egg in Atari’s Adventure will never yield tremendous riches upon you, but damned if that isn’t a seductive notion.

Ready Player One releases in theaters on March 29th.