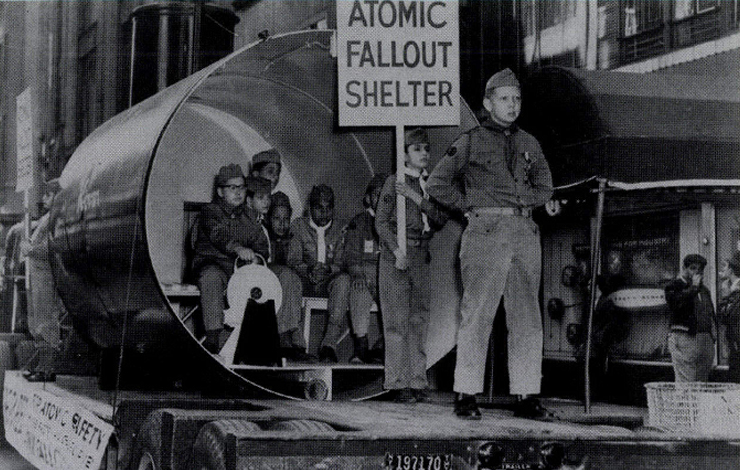 Directed by Jayne Loader, Kevin Rafferty, and Pierce Rafferty, The Atomic Café is a comic horror documentary film comprising of a compilation of propaganda shorts and military instructional videos from the “Atomic Age” during the Cold War in the ‘40s, ‘50s, and ‘60s. The found footage documentary has no title cards or voice over, and it honestly doesn’t need it. The government films, television ads, and news interviews of various officials speak for themselves. It’s truly a harrowing examination of morbid U.S. policies and ideals that still ring true today in the “my button is bigger than your button” era we are currently living under in this presidential administration.

The film begins with hard-to-watch footage of atomic bomb victims both alive and dead. There are charred bodies and children with their skin peeling off, all the while happy-go-lucky American music plays singing about the successes of the atomic bomb. It’s pretty sickening and chilling to watch. As the film moves through the decades, the propaganda messages become more about communist hate and catering to nuclear anxieties. There are videos of the U.S. government assuring children that ducking under their desks will save them from radiation. There are videos urging home owners to build bomb shelters in case the Russians decide to bomb the U.S., and almost every family has gas masks and radiation suits for both the parents and the children.

While some images in The Atomic Café are chilling, there are many aspects of the film that are straight comical. Some of the things the government told people were so ridiculous that audiences can’t help but chuckle and the buffoonery of it all. Things like, “stop worrying and love the bomb” or telling a group of military soldiers that when viewed from a distance, the atomic bomb is the most beautiful sight they’d ever see.

Then again, considering the era we live in now, it is completely believable, but it’s also very, very sad. Because the harsh truth is when it comes to propaganda and selling narratives to naïve American audiences, nothing has really changed.

The Atomic Café was originally released in 1982 but went through a 4K registration funded by the National Film Preservation Board of the Library of Congress. It will be re-released in theaters this summer and will make a home entertainment debut in the fall.