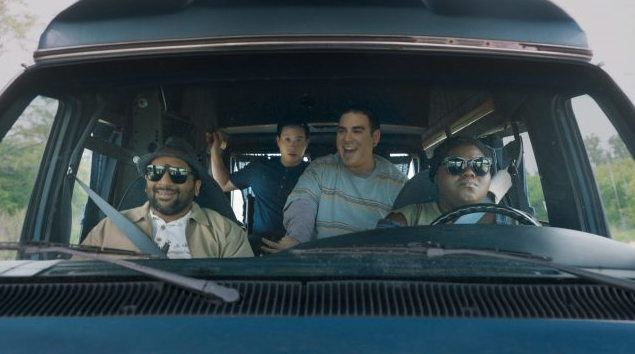 Come As You Are is a bromance, road-trip comedy that seriously gets it so right. Directed by Richard Wong (Saint Judy, Girlfriend’s Day), starring Gabourey Sidibe (Sam), Grant Rosenmeyer (Scotty), Hayden Szeto (Matt) and Ravi Patel (Mo), this is a film about three guys who sojourn to a brothel in Montreal that caters to individuals with special needs.

Based on a true story, getting one’s cherry popped has never been more relatable, heartfelt and incredibly funny. Writer/comedian, Erik Linthorst (who is an able-bodied white guy and had a family connection to disability) essentially said, “I knew if I wrote about every human deficit my buddies and I faced,” that he’d win. And win he did.

Gabourey Sidibe flawlessly plays the no-nonsense, “Don’t call me sweetheart” driver to this motley crew. She told BGN that she came to the project in 2017. She wasn’t asked to audition and Linthorst confessed he always had her in mind for Sam.

Sidibe mentioned, “Being a part of stories that aren’t the norm is what excites me and what ultimately drew me to the script.” She also added, “It’s super fun!” Come As You Are is full of so many hilarious moments that have everything and nothing to do with a blind Indian guy; two guys in wheelchairs – one white, one Asian, and a lonely Black chick who go on a road trip together…for sex. The commonality and diversity in this film are on full tilt and it’s insanely refreshing.

At some points, the film sorta takes on a reverse heist quality, as the guys fail to tell their parents that they’re leaving. When smothering mother, played fabulously by veteran actor Janeane Garofalo, finds her son missing, whom she has bathed and cared for tirelessly and potentially tiresomely for over thirty years, the frantic chase begins. She enlists the help of hunk Matt’s (so well done by Hayden Szeto) parents (thank you C.S. Lee and Jennifer Jelsema) and it’s on!

Come As You Are is an adaptation of the highly acclaimed 2011 Belgian film, Hasta La Vista. Both films are based upon Asta Philpot (and his 2008 BBC One documentary, For One Night Only). Philpot, whose ability to physically move has been impaired by arthrogryposis since birth, advocates for the sexual lives of the disabled. He mentioned that through his journey and these films, he hopes to remind people that “People with disabilities are also human beings.”

Philpot was an important component to Rosenmeyer getting Scotty (aka Asta) right. The actor and the real guy hit it off during pre-production and Rosenmeyer says Philpot was a “ray of light”. “Asta helped me with everything from positioning my body, to how to use the mouth stick to type. He’s the reason I was able to pull this character off.”

During the highly-supportive Q&A post-show, Dave, a wheelchair-bound audience member, brought up the new obvious: “I loved the film…but why aren’t there any disabled actors in the movie?” He had a point and it was the one moment where the justly-proud and jubilant cast fell silent, as did the audience. Delaney Feener, who plays a receptionist in the film and has a shortened arm took the mic and basically said, “I’m here.” Feener (who considers herself “differently abled”) stated the obvious, “There aren’t a lot of roles for people who look like me; this film gave me a chance.” She explained she’s grateful this film did the amazing work done to tell a well-crafted story about disabled individuals; that merely having the film in existence is a step towards change.

This is a conversation, thankfully, that we’re having more and more across many platforms lately; Ravi Patel — who nailed his role as Mo — expanded on this notion of who is playing who by mentioning that there is a difference between representation and misrepresentation and Come As You Are works to avoid the latter. This seems quite true and is felt wholeheartedly as you roll along with this endearing story. However, while there is an important scene with several wheelchair-bound actors, not having leads who are disabled is a fact that some would, should, and will consider a flaw of the film.

Come As You Are was almost the film that didn’t. During the Q&A, and full of emotion, Rosenmeyer (who also co-produced the film) mentioned that no one wanted to fund this film. No one. In fact, he came onto the project because the film had fallen apart more than once and he believed (and loved) the characters so much that he fought for and championed it to be made. That fight took a long five years and Come As You Are became a passion project he couldn’t let go.

This film has strong ties to Chicago that include African-American co-producer Jacqueline JJ Ingram, Sidibe, Feener and many more (along with an important moment that takes the characters to a blues club in Chicago). It’s fitting that film investment group Chicago Media Angels gave the film wings, along with assistance from the screenplay network, The Black List.

Come As You Are is a feel-good must see for everyone.

Peppur Chambers is a Midwestern Girl Out for a Twirl. Check out her debut novella Harlem’s Awakening on Amazon. Read her blog www.penandpeppur.com where tells stories of heroes, including her own. And learn about her sultry, sassy, sophisticated women’s empowerment movement on www.brownbetties.com.

Lily Cowles and Gabourey Sidibe on Ridesharing in ‘Antebellum’