The SXSW headliner film Long Shot directed by Jonathan Levine and based on a story by Dan Sterling is a delightful comedy about how opposites attract, even in the most impossible of circumstances. Seth Rogen plays Fred Flarsky, a super liberal journalist who works for an independent news site called “The Advocate” where he’s given enough creative liberties to rant and rave about political and social issues from climate change to white supremacy.

Fred tries to infiltrate a group of Nazis (not as successfully as what did Ron Stallworth with the KKK in BlackKklansman). Fred’s cover is blown moments after his first meeting with them. When they discover Fred is Jewish and have been recording their meeting the entire time, they go after him. Fred narrowly manages to escape by falling out of a window, both bones and phone still intact.

However, Fred’s victory is about to be over when his boss delivers the bad news that their small news organization has been bought out by a large media conglomerate. This is against everything Fred stands for, he’s livid and he leaves his job disgusted at what it has now become.

Fred’s best friend (O’Shea Jackson Jr.) convinces him to check out a performance of Boyz II Men at a local event and a twist of fate happens when he glances over and locks eyes with Charlotte Field (Charlize Theron).

Charlotte is secretary of state for the U.S. President (Bob Odenkirk) and is interested in getting her boss’ job since he no longer has plans to run for re-election. He decides he wants to endorse Charlotte for President — a position she’s been gunning for.

Here’s where things get interesting: Charlotte and Fred knew one another as teens, she was his sitter and there was an awkward kiss between the two that have stuck with Fred ever since. When Charlotte recognizes Fred, the energy and connection between the two are instant.

When Charlotte discovers that Fred is a journalist, she decides to hire him as her speechwriter. Fred and Charlotte work together, and the two could be no more different — which makes this an adventurous, funny, and entertaining romance to see unfold. 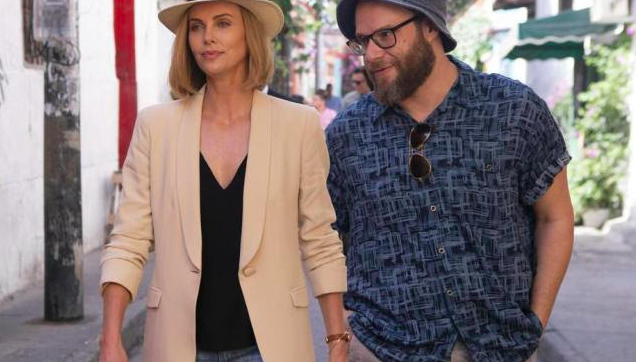 The unlikely love affair between someone like Charlotte Field and Fred Flarsky is more than just the superficial notion of seeing a “Beauty and the Beast” situation. Charlotte looks like a supermodel and Fred looks a busboy at Olive Garden. There’s also the fact they both are from opposite sides of the political spectrum, Charlotte appears to be more middle-of-the-road on issues and Fred is as progressive as they come.

Charlotte is so far removed from pop culture, she has seen an episode of Game of Thrones nor has any knowledge about the Marvel Cinematic Universe.  And while yes, these are fandoms that not everyone has brushed up upon, Charlotte is so involved in her work, she barely makes time to enjoy such fandoms or become more social.

The locker room humor that you would expect to see in a Seth Rogen film is slightly watered down in Long Shot, however, there is a scene in the third act that gets a little obscene, just to remind us we are in a Seth Rogen comedy. Overall, this is a more mature comedy for the actor, which seems fitting at his age. It appears he’s crossing over into Adam Sandler rom-com territory here. You can decide how you wanna take that.

Although Long Shot doesn’t present itself as a gender-flipped comedy, however, it sort of appears that way. Charlize Theron’s character is a woman in a powerful position (the highest in the land) captures the affection of a man who is an unemployed journalist. And it is notable that Charlize’s character doesn’t dumb herself down to relate to Seth Rogen’s character. She simply lets her guard down — like we all do when we build a relationship with someone we trust.

Long Shot is a comedy that will likely become a fan favorite and has earned its rightful place in the genre of silly rom-coms.