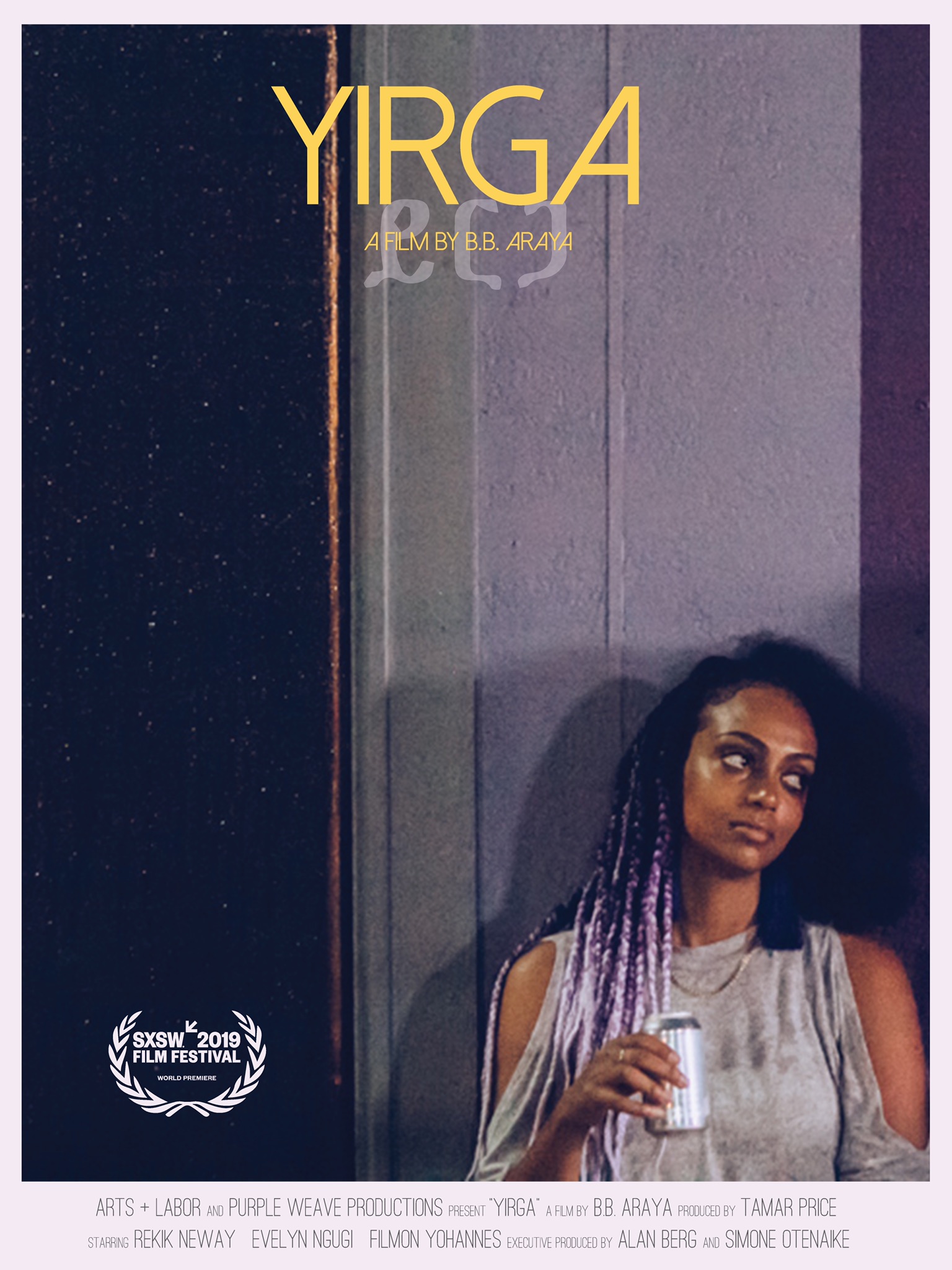 Yirga, is a short, simple but real take on Black womanhood and the internal and societal issues one may face regarding cultural identity. The short film is targeted toward a millennial audience and addresses topics such as hair and language. B.B Araya, creator and director of the six-part short series We Are, a series distributed by Issa Rae Productions, is the creative mind (writer and director) behind this short film.

The film opens up with Yirga running to a beauty supply store only to discover that the shop has been closed. Her box braids are partly done. The right side of her head features completed ombre lavender braids, while the other side is a beautiful fluffy fro. Understandably upset about the situation, Yirga stoops down in front of the shop in frustration.

There is a lot to analyze in the first scene. The scene says a lot in relation to Black women and the stigma often associated with Black hair. As a Black woman with natural hair myself, I understand how important hair is and what not having it done can do to one’s self-esteem. It also affects society’s perception of you. The stress and anxiety that Yirga goes through as a result of the situation is completely justified. Black women are constantly judged and ridiculed over how we wear our hair. Many Black women and other women of color would react the same way Yirga did.

Another aspect of that scene that stood out are the weave advertisements displayed on the shop’s windows. There are advertisements for “Brazilian Remy”, “Peruvian Remy hair”, “Indian hair” — all of which are long, silky and wavy and not kinky or curly. The contrast between Yirga’s half-natural hair, half-braided hair and the weave adverts is powerful imagery that can be interpreted in numerous ways.

While the natural hair movement has become increasingly popular and normalized, weaves and other protective hairstyles such as braids remain a huge part of Black hair culture. I applaud B.B Araya for including all three aspects in that scene.

The scenes of the film address topics such as language and cultural identity/beliefs. When entering a gas station market, Yirga is asked by the clerk if she’s Habesha, which refers to specific ethnic groups from parts of Ethiopia and Eritrea. During the conversation with the store clerk he insists on her speaking her native tongue, Tigrinya, rather than English. He also asks her “whose daughter are you?”. When Yirga responds with what one can infer is her mother’s name, he responds with laughter. He tells her that she must answer with her father’s name.

Language is and always will be a powerful aspect of any culture. Language is often tied to a person’s identity and gives them a sense of self. It helps a person understand who they are, where they came from (culture and heritage), and helps maintain a link to their family/society.

It’s hard to say why Yirga chooses to initially respond to the clerk in English and not Tigrinya. Her character may be experiencing an internal issue in terms of her identity. This is something that many millennials and other generations struggle with at some point in time. Questions such as, where do I come from, what language should I use, how should I speak, what should I look like, come up and seem to directly relate to and result in a shift in individuals perceptions of us.

Yirga responded with her mother’s name without hesitation, and this very act shows how she identifies with her Habeshan culture and the beliefs that some may have relating to gender and power. There’s a reason she didn’t initially speak Tigrinya and there’s a reason for her not mentioning or even thinking to mention her father’s name. This could be due simply to cultural differences and although I do not know if Yirga is a first-generation American, this is a situation that many first-generation Americans can relate to in relation to cultural differences and cultural acceptance.

Yirga is a well thought-out piece that tackles many relevant topics dealt with today. Although at first glance it may seem like a straightforward film, there are a lot of layers to unpack from Black hair to struggles with cultural identity.

Yirga is currently screening at SXSW in the Texas Shorts Program. The film will be screening on March 16th at Alamo Lamar and Alamo Lamar C from 11:15 am to 1:03pm.