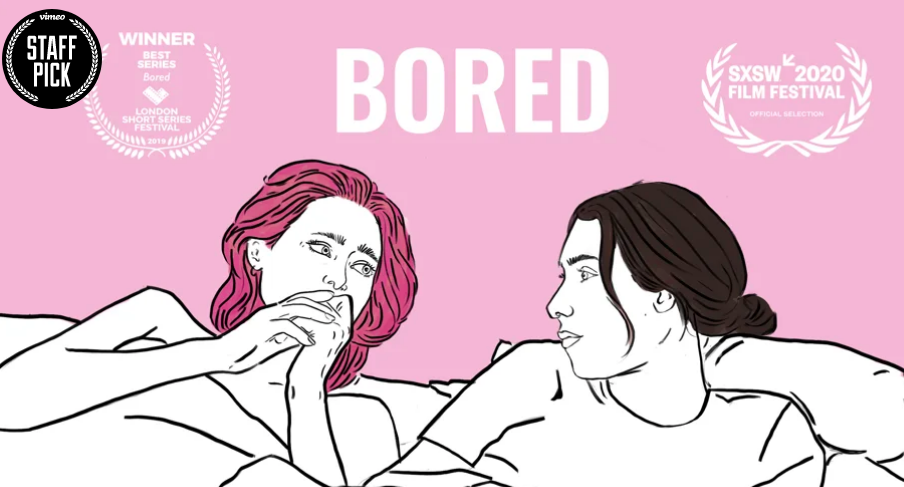 The pilot episode “Sunday” from the series Bored (2019) is just shy of any real substance.

It opens in the same way it ends by impressing upon the viewer a feeling of confused bewilderment. With its attempt to seem more serious than it is, it loses its message of what could actually be a very entertaining show. The first installment leaves a lot to be desired. Its unclear plot, lack of humor, and strange dialogue together make the audience for this series ask the question: Why?

Bored is co-written by Coral Amiga and Nicole Hartley. Amiga has been credited in several projects as actor, writer, director, and producer. Hartley is also credited with acting, writing, as well as producer. These two women also star in the pilot episode of this show. Amiga plays Jamie and Hartley plays Eve, both showing a real presence in front of the camera. These two have chemistry that feels authentic and sincere.

The showrunner of production is credited to Georgia Oakley. The producer is Serena Armitage, and the interesting cinematography is done by Toby Goodger. The editor is Xanna Ward Dixon and in charge of sound is Tom Jenkins. The original music is a plus for this series, and it was created by Tim Morrish and Jessica Jones. The cast of actors include names like Morgan Watkins as Frankie, Laya Lewis as Naomi, Katharine Davenport as Hannah, Damola Adelaja as Doc, and Kristina Epenetos as Luciana.

The plot is lackluster. In fact, there appears to be extraordinarily little evidence of one, unless drugs, sex, and alcohol is considered a plot. In the midst of geopolitical upheaval, these two young women in their search for stimuli on a Sunday night experience an existential threat and attempt to drown it out in the only way they can. The series attempts to bring awareness to the Brexit crisis in England, yet does so with little refinement. This important event, which is worthy of discussion, is casually brought up in the middle of listening to a bigoted poetry slam and an upset drug dealer. The casualness of shoehorning and political name-dropping does little, if anything, to win audiences over.

While at what they call “the party of the century,” the friends they associate with appear to be doing a spoken-word performance with a touch of casual racism. This undermines any legitimacy that the show could have had with their political discussion, if it can be called that. What is most upsetting about this production is that it shamelessly attempts to appear substantive with its jabs of political figures without offering anything real. For example, in the main characters’ drug-induced state, they clumsily find their way from one room to another, opening doors onto the teenage clichés of drug, philosophical discussions, and sex.

This episode attempts to illustrate what some young adults want the most — to be free with their sexuality and experimenting with drugs. The narrative timeline depicts their time at the party and how long they stayed, before things get what could be considered “interesting”: the uncomfortable day after. The two female leads wake up next to each other almost nude.

Despite Bored being categorized as a comedy, it fails to actually land any jokes and its dialogue misses its mark. Most of this is partly due to its poorly timed moment where humor should be injected but isn’t. Bored is an experimental show that paints young people with a broad brush, showing what it thinks they want to see: sex, drugs, parties, and alcohol. This program does barely more than present us with odd situations. There is a bathroom scene in which both the leads are talking to each other and Eve, sitting on the toilet, stars at her vagina and saying, “Do you think my vagina is fantasized enough?” This is a moment that should be hilarious, yet the timing just isn’t there.

There are aspects of this show that do in fact work, from the authentic connection that is felt between the female leads to the awkwardness of the day after the party. In fact, another positive would be that it does pass the Bechdel Test: It has two women who are named, who talk to each other, and they talk about something besides a man. I just wish the show were worthy of the test.

While the series is in its infant stages, it does show promise for leading the way to interesting discussions. If the series is able to find its footing, I can really see this being a comedy that deals with serious issues in a real and entertaining way. But, as it stands now, the series still needs to clearly define their ideas.