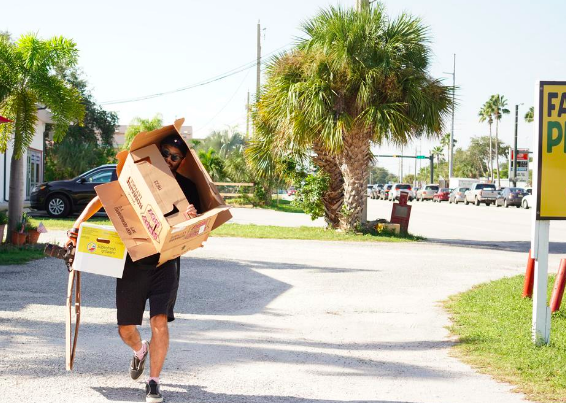 They say that the most beautiful cardboard in the world comes from the United States, which explains why this particular art documentary was created.

The dumpsters in the States are a veritable playground filled with lots of colorful cardboard boxes for recyclers.

Homecoming is a story about Yuko Shiomaki and his cardboard wallet’s journey from Japan to the United States. It might seem trivial or even a little farfetched to have an entire documentary about a man and his passion for making wallets out of used cardboard. Yet this is exactly what we have here. A seemingly ordinary piece of cardboard has a history, an artist, and even a family of people it has touched in its passing from the United States (specifically Florida) to Japan. This is about one man’s journey to find his cardboard wallet’s place of origin and the people he meets on the way.

This production was made possible because of the crew’s vision and eagerness to tell this surprising story. The showrunner, director, and producer of this documentary is Yuko Shiomaki. His co-director, editor, and cinematographer is Anna Thorson Mayer. Together these two talented individuals are able to imagine the journey and have it realized for all audiences to see. Leo Fleming also edits this production. The sound designer is Devon Mackinnon, and the music is by Daichi Yoshida. Their contribution to this work has allowed for a unique narrative to be told.

Yuko Shiomaki has traveled the world in search of cardboards he likes. As it is briefly written on the description box, “he has been to Thailand, US (Florida), New Zealand, he has been to more than 37 countries” all in search of cardboard. This episodic documentary tracks his journey in Florida and shows the connections he has made on the way. Shiomaki’s story is not the usual one; it is perhaps one that might not be on many people’s radar and therefore might seem strange. But there are countless people who have traveled all over the world in search of something they admire, like, or even have a passion for. So, why not cardboard?

While understandably, sitting back for 30 minutes and watching someone’s journey with cardboard through Florida might not be everyone’s idea of a good time, there are a few positives to take away. For instance, the message of repurposing discarded cardboard for the sake of the environment is a good reason. This message is found in between his journey when he meets Blair Maze. She has done marine mammal rescues for 30 years. Her story began when she took a walk along the beach and found a beached whale. She stayed with the whale for 2-3 hours while the proper authorities attempted to help. At that moment, she had found her purpose in life — to protect and care for those that cannot do so themselves.

Through her own journey, Maze discovered that the classroom setting was not suited for her. She was discouraged by many adults, teachers, and parents, who all told her that she could not do it. Feeling depressed and frustrated, she dropped out of college, only to pursue a career path in the aquarium. This steppingstone led her to partner with a national ocean association.

Both of these lives intersect because of Shiomaki’s art projects. Maze saw the beauty in his artistic wallets and saw a connection between what he and she both do. His work allows many to see that cardboard, after its use can be made functional again and therefore reducing the amount of trash in our ecosystems. This was a connection that might not have been as apparent to those who were not looking.

Homecoming’s interesting narrative presents a less than appealing story for the masses, but it does manage to, if you watch it all, make you feel something. This can at least to some degree be attributed to the music selection. The music plays at just the right time to pull on the audiences’ heart strings. Shiomaki’s quest has allowed him to get the answers he was so longing for when he started. Each person, answer, and scene are perfectly timed with a touch of music for the full emotional experience.

Homecoming might not have the glitz and glamour that Beyoncé’s Homecoming did, but it does have heart. Shiomaki’s adventure is filled with passion for his art. It comes to show you that treasures are not always gems, jewels, money; sometimes, they are cardboard. While it might not be a miraculous piece of cinematography, it does have an interesting message. When you find yourself with a cardboard box, you might, even for a moment, want to look at it and ask, “Where were you before you landed in my trashcan?”