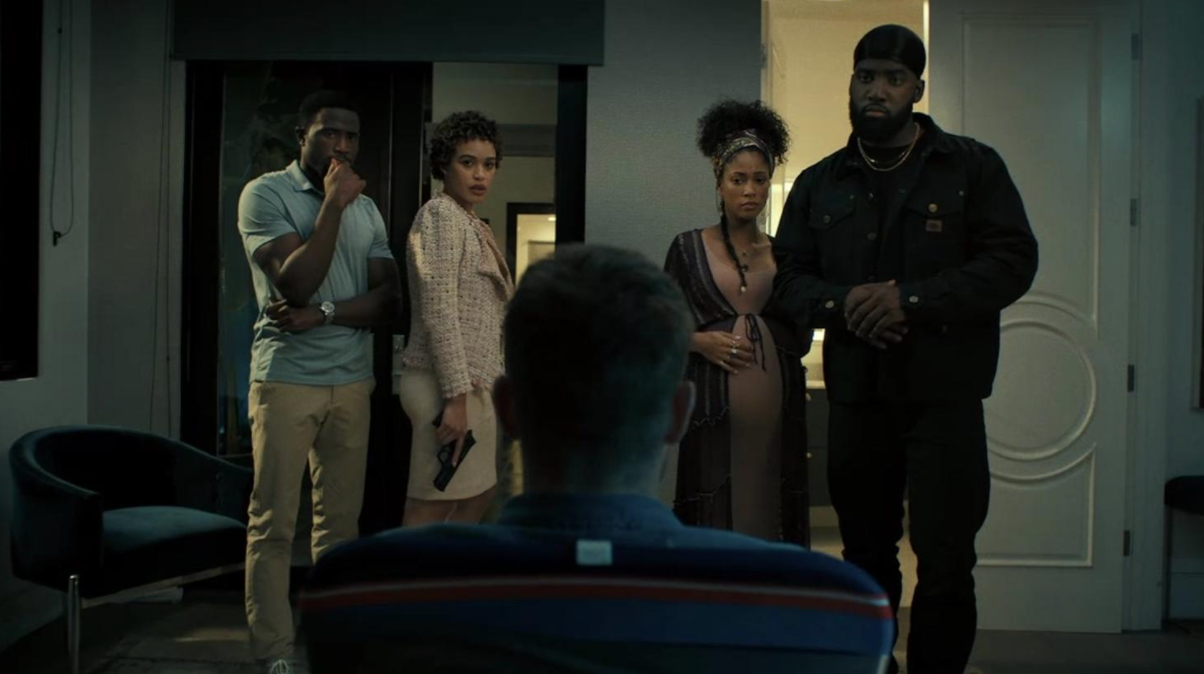 If When Keeping It Real Goes Wrong were a movie, it would be A Lot of Nothing. Director Mo McCrae’s directorial debut, A Lot of Nothing tackles everything at once in this thrilling feature. Starring Y’lan Noel as James and Cleopatra Coleman as Vanessa, A Lot of Nothing explores the consequences of stereotyping. It’s a smartly crafted film that may get in a little bit over its own head, but it’s no less entertaining.

James and Vanessa are a wealthy, Black couple who have positions in upper-level careers. One night while watching the news, they hear about a kid being shot. The officer is named, and they realize this isn’t just any LA cop, this is their neighbor, Brian (Justin Hartley). Spurred on by events both during the day and those that have been festering for years — even before James and Vanessa met — the two end up throwing a more than unconventional dinner party.

James’ brother Jamal (the wonderful Shamier Anderson) and his “baby mama”/fiance Candy (Lex Scott Davis) are coming over to see the new house and hang out before Candy’s baby is due. Incidentally, the night becomes much more hectic when Vanessa ends up essentially kidnapping Brian and holding him hostage at gunpoint, saying she just wants to talk. Soon Jamal and Candy are involved, and everyone involved is trying to figure a way out of this hell, or at least through it.

A Lot of Nothing is a story that says it’s about police brutality when really it has very little to do with the story. What the film is actually about are many themes that are easy to get wrong. Yet Mo McCrae handles them beautifully. We deal with power dynamics; James and Vanessa have a gun and discuss using it to question their neighbor. This scene descends into sexual foreplay and is as uncomfortable as it sounds. It’s about race, and it tackles this theme in a very meta way where it’s not just Black, but the plight of the light-skinned is also on full display.

It’s about career fulfillment and sexism in the workplace. James and Vanessa are condescended to in the same way. However, James earns the admiration of his superiors, and Vanessa is forced to vent her frustration locked in her car singing And I Am Telling You I’m Not Going from Dreamgirls. As a side note, I’m sure we have all been Vanessa in this regard, and she played it so authentically. Coleman takes some wide swings with Vanessa, and while not all of them connect, this one was a home run.

It’s also about the advancement of the new age Black person, who is affectionately (or dismissively by some) called “woo woo”. Candy wants to name her child Onyx after a powerful healing stone and brings a bundle of sage as a housewarming gift. The differences between the couples showcase a new wave of Black classism that can be hard to watch for how authentic it is.

There are even more things the film is about, and this is what I mean when I say it can get a little ahead of itself. There are twists and turns and revelations in nearly every act. And very few have to do with the fact they actually kidnapped a cop at gunpoint. In less capable hands, the risk of creating too many loose threads is apparent. There’s a lot to focus on, and some final reveals seek to reset the scenes, but I don’t know how successful it is. I was satisfied by the ending, but I still wanted more. In a film like this, everything has to be connected for it to work. It’s the way you create a trifle by putting a cone around it to keep in the ingredients while it sets. Without it, you have a mess of ingredients. I don’t believe A Lot of Nothing fully reached this level, but it was close enough to give me pause.

That said, so much attention and detail was paid to the set dressing, wardrobe, and overall lifestyle of the couple. In the beginning, they decide to write a letter about their neighbor to the neighborhood. James suggests an MLK quote and then they discuss why that’s trite and won’t work. Maybe they go with Churchill instead? The dialogue is so specific and ties into the narrative of the film not stylistically — you can tell this couple’s education levels vs Jamal and Candy — but also contextually.

I do feel the need to say the weak link of the group was Hartley’s character, Brian. As the story unfolds, so do Brian’s motivations, but his character is a bit too unformed. There’s an inherent message about assumptions and type-casting a person before you know all of the details. Therefore details of Brian’s life go in the direction of trying to prove he’s not just a cardboard cutout, but they seem to get stalled about 3/4ths of the way to their destination. Yes, as a normal human being, Brian can be wrong and right in the same breath, but he can’t be racist and not racist? He can’t be penitent and defensively uncaring? Hartley does good work with what he’s given, and I can see the apparition of what McCrae was trying to accomplish, but I feel the character could benefit from a little more streamlining.

That said, A Lot of Nothing is a stunning film that kept me surprised until the very end. It said so much without the need to yell it directly. It’s a film that trusts its audience and will only benefit from multiple watches and discussions, which I highly recommend.