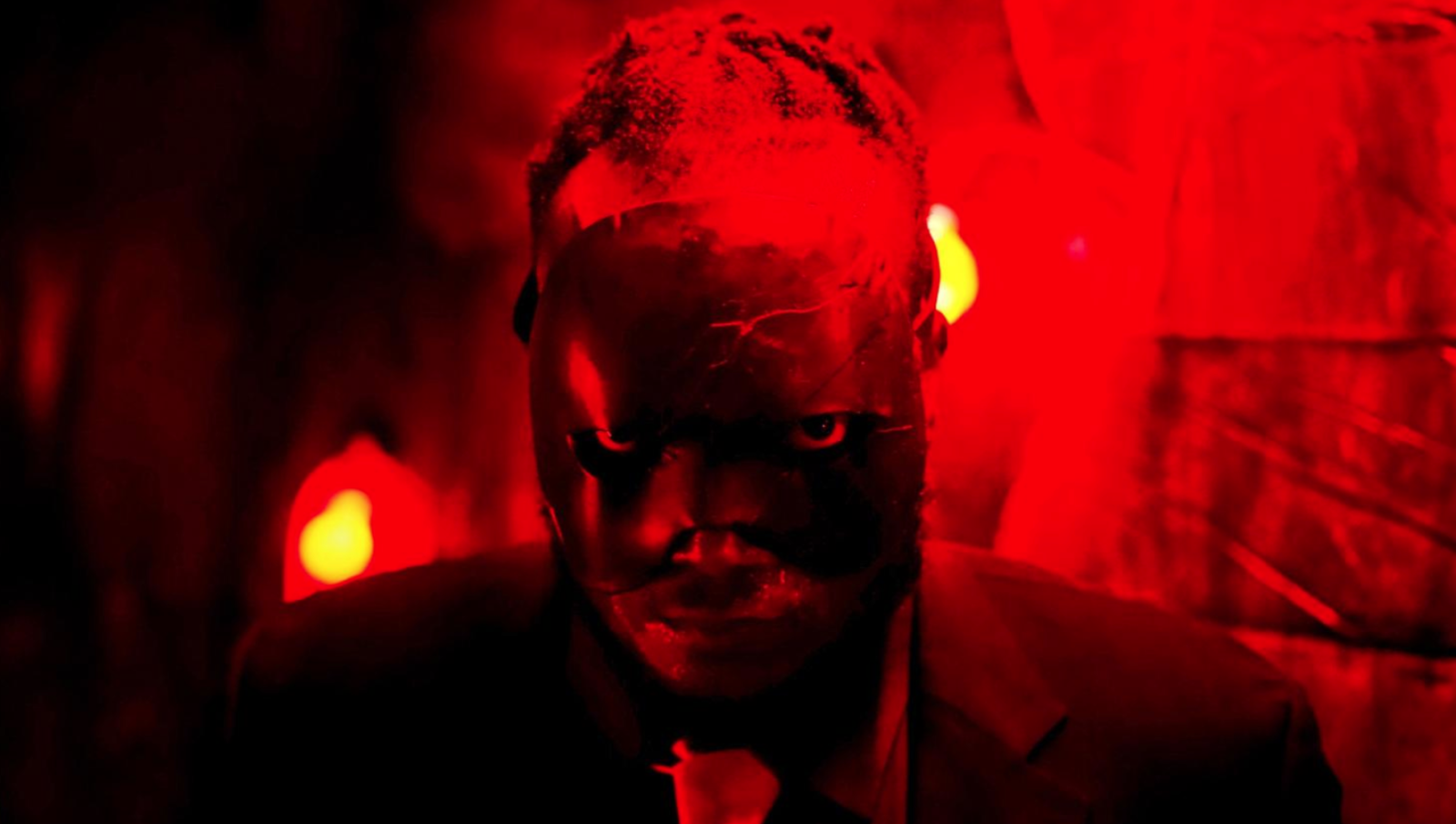 Writer/Director Bill Posley’s Bitch Ass is just plain awful. In this predictable revenge horror/comedy, a group of teenagers is tasked to rob a house to be initiated into the neighborhood gang. Posley touts his film to be the first serial killer movie with an all-Black cast. Of course, it takes place in “the hood” and involves a generic “gang.” What the teens expect to be an easy heist turns out not to be the case because the resident serial killer Cecil aka Bitch Ass (Tunde Laleye), is at home. Bitch Ass easily picks off the teens one by one as he challenges them to various gory interpretations of games like Jenga and Operation but the rules are, if you lose the game, you lose your life.

Bitch Ass begins with potential. Actor Tony Todd, the original Candyman, sets a cool vibe in his opening monologue that combines a bit of The Cryptkeeper with a little Vincent Price, but the film immediately goes downhill from there. Bitch Ass attempts to be a mixture of the 2015 horror/thriller Don’t Breathe and 2021’s Squid Games but completely misses the mark. The script is overwritten and filled with broad stereotypes, and most of the time, the dialogue feels like a dead weight falling out of the actor’s mouths.

There are a few unexpected moments where I believe I’m watching actual people. The gang leader Spade (Sheaun McKinney) and young Cecil (Jarvis Denman Jr.) both have some believable moments. However, for most of the time, I was watching actors who learned their lines, hit their marks, and waited their turn to be filmed saying their lines while working really hard to perform being funny in a film that was kind of attempting to be scary. One creative choice that was particularly annoying was having characters alone in empty rooms, speaking their thoughts out loud right before Bitch Ass grabs them.

Film is a visual form; couldn’t the character’s thoughts have been shown instead of spoken? In some cases, you can see Bitch Ass lurking around before he grabs someone. It wasn’t scary, it was awkward. Why are they talking to themselves out loud for no reason? There also was something off about the pacing of the film. Everything that was going to happen was telegraphed so obviously, the jump scares were cumbersome. If the film was able to pull off being camp, there’s a slim chance it could have been funny, but the comedic timing was way off in this movie.

All that being said, Steven Parker’s cinematography, Rylan Rafferty’s editing, Joseph Mohan’s score, created an effective backdrop for the characters to reside in. Grandmother’s house was filled with the right amount of eclectic things to set the tone. It’s too bad the writing didn’t live up to the cinematography and editing. The gore was adequately disgusting, the special effects team did their job well, and the costume, makeup, and hair departments were on point.

Bitch Ass intends to be an homage to horror films in the 90s like The People Under the Stairs, but Bitch Ass makes no compelling social commentary. The audience has no reason to root for or against any of the characters on screen. The “good characters” are bland, the “bad” characters are one-dimensional. It’s obvious who will be the next victim.

In the horror movie Don’t Breathe, the audience has empathy for the juvenile delinquents who break into the house because the writers immediately show the audience how bad the main characters’ home situations are. The characters are fleshed out, the stakes are high, so the audience is compelled to root for them to survive. The kids in that film also have that horror film element of being slightly annoying, and the Old Blind Man has enough character for the audience to feel guilty for admiring his skill in hunting the kids who are trying to rip him off while being disgusted in his brutal ability to kill.

The gang in Bitch Ass is generic. They aren’t shown terrorizing the neighborhood or doing anything that warrants Bitch Ass’ wrath. It just didn’t seem right or funny to watch Bitch Ass murder Black kids so brutally just because they broke into his house and lost some crazy games he forces them to play.

The film takes too much time hitting the audience over the head with flashbacks that show how Cecil’s being bullied turned him into a serial killer. With that much time taken showing how he was bullied, it’s strange that Cecil/Bitch Ass doesn’t get his revenge going after the people who actually bullied him. Instead, for most of the film, Bitch Ass just kills these random teenagers. It made no sense.

It made me angry that time wasn’t taken to flesh out more of the victims so that viewers could have an emotional reaction to the brutality these characters face. If you’re going to create a Black serial killer who kills Black young people, shouldn’t there be some kind of compelling hook? Shouldn’t it be so campy it would allow the actors to have fun just tearing into the characters, eating up the scenery, and making some kind of social commentary like in Tales from the Hood? Shouldn’t there be some kind of point for watching?

In his director’s notes, writer/director Bill Posley says: “Growing up in a white town in Massachusetts, I was obsessed with movies because it provided a brief window into my culture, but there was always a lack of representation. That’s why it has been a dream come true to write and direct Bitch Ass starring an all-Black cast, set in a Black neighborhood, that will actually make history by debuting horror’s first-ever Black masked serial killer.”

Yes, representation matters, but how are we choosing to represent ourselves? How are we deciding to make history? The fact that traditionally, serial killers have been white men makes a clear statement in connection to white dominance and location to power. In the Friday the 13th movies, Jason is a white man who kills everybody and comes back to life 12 times. Just think about that. White male serial killers can kill without consequence and are celebrated.

Placing a Black man as a masked serial killer in a horror film could be brilliant. This scenario could be terrifying, authentically horrifying, and hilarious on multiple levels while including a social commentary that utilizes wit to make a statement. It could even be satire that challenges us to consider why our culture seems to get off on watching white boys kill everybody (I’m looking at you Netflix’s You). Unfortunately, Bitch Ass doesn’t even get close to going there.

Bitch Ass premiered at the SXSW film festival on March 14, 2022.