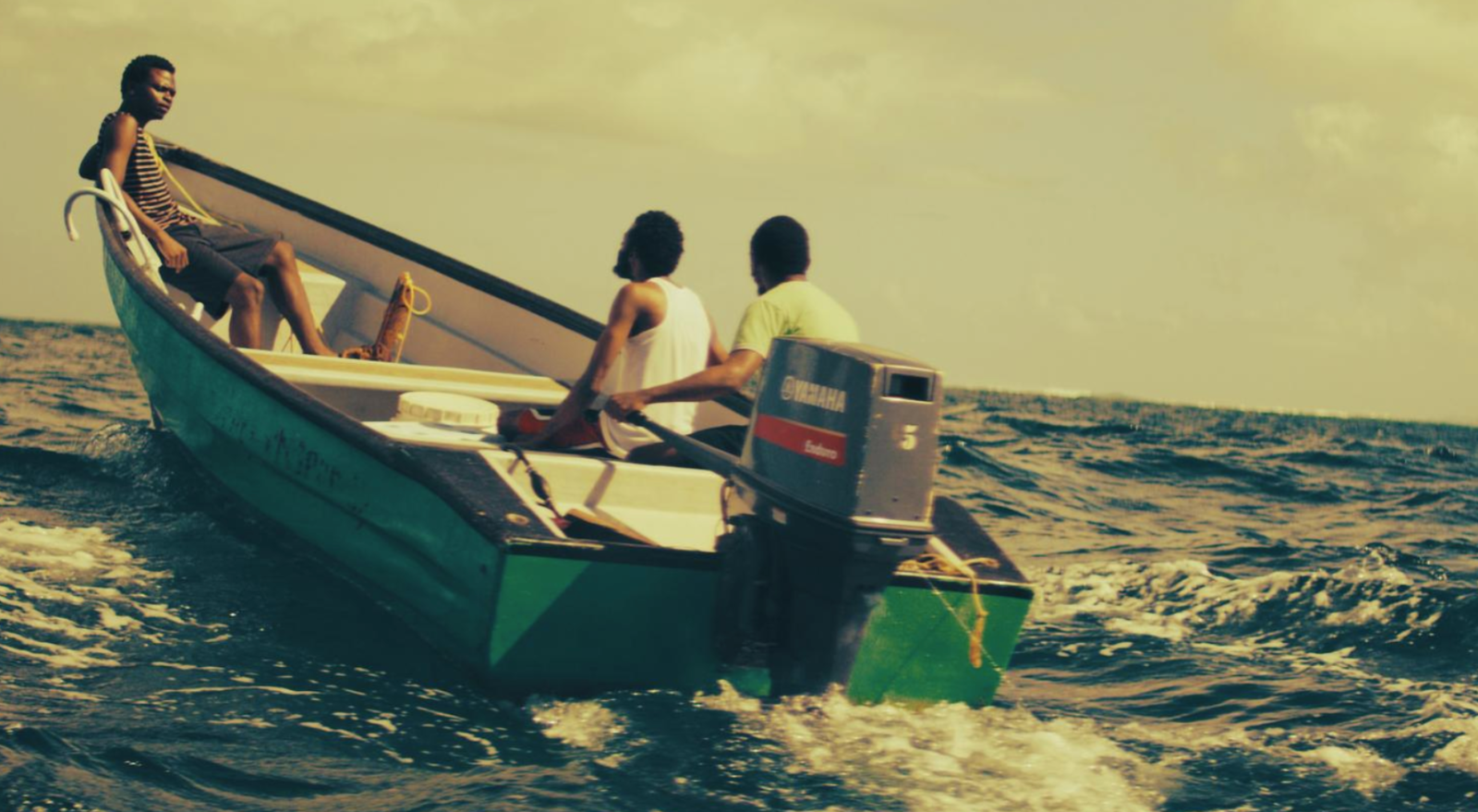 Movies about drugs come in many different varietals and flavors. Damian Marcano’s Chee$e delivers a classic cops and scammers tale, but this time with a taste of the Caribbean. Marcano has trodden this ground before. He’s made a name for himself as the director of Snowfall and Claws, which have artful drug deals at the core of their narratives. The story in Chee$e is much the same, but it’s the package that lends the story a certain uniqueness.

Envisioned as part one of a Caribbean Trilogy, Chee$e capably sets the scene for its brand of fantasy/cautionary tale. We follow Skimma (Akil Gerard Williams) in the remote island village “Behind God’s Back.” So-called, Skimma believes, because God must have forgotten about them. He’s got big dreams of leaving his village and exploring the world at large, and he’ll do just about anything to make his dream come true.

While working as an apprentice to a local fromager, Skimma comes up with an idea to make money fast and a foolproof way of getting it done. Using what he’s learned from his mentor Mr. Ottone (Piero Guerini), Skimma devises a way to hide marijuana in blocks of cheese. Coincidentally, the process he uses makes the weed more potent, and demand increases rapidly for his new skill.

He’s seeing success, and while the original goal was to leave them, Skimma finds pleasure in showing the village what they’re missing. In one scene, he’s getting a haircut, and he says that when he walked into the barbershop, he had 5 dollars in his pockets, but after his shape-up, he feels like a million bucks. This mirrors the events of Skimma’s life as we see him become more and more successful.

The path is not without resistance. A girl, Rebecca (Yida Leonard), throws a hefty wrench into his plans to escape. The daughter of a devout and staunchly religious woman, Rebecca insists she’s pregnant, that Skimma is the father and he should love her and the baby. Skimma is unconvinced. There’s also the issue of a police sergeant with a chip on his shoulder and loads to prove. Sgt. Leon (Kevin Ash) was recently disgraced for stopping a truck shipment of what he thought were drugs but ended up being innocent Pampers. He’s determined to make as many large busts as he can to redeem his name.

Meanwhile, we see Skimma deal with abandonment issues caused by his father, though Walter’s disappearance may be less to do with desertion and more to do with the local island black magic woman, Hortencia (Ayanna Cezanne Leanard).

I’m typically averse to having too many characters and too many distractions from what appears to be the main goal of the film, but being that this is a trilogy, I’m willing to give it the benefit of doubt since the characters are well fleshed out. That said, it’s still a risk to bet on three movies to tell a complete story. Thankfully Marcano — who also wrote the film and contributed to the cinematography —  has formed the first installment that can stand on its own. The ending perfectly sets up part 2, so you have enough information to be ready when it comes, but you can still enjoy Chee$e.

In slang terms, “Cheese” means the same thing as other pizza ingredients – dough, bread, sauce; they all speak to the type of currency that can change lives, be it for good or otherwise. Skimma gives f*ckboi vibes for sure, but he’s not a complete scoundrel. Williams gives Skimma a relatable dream that allows you to empathize with his journey. He’s asked several times if he’s a drug dealer and always says no until one day he’s forced to consider that yes, he’s definitely a drug dealer. The realization is played through a conflicting and recognizable set of emotions. It provides a needed anchor because besides Miss Marie, who runs the wing shop, and Rasta man Osiris (played delectably by Lou Lyons), everyone else seems to be terrible at worst and at best — sus.

Even Rebecca’s methods, and motives are very shaky and though they work, it creates a very “yikes”-like situation. The actions of everyone in the film tend to be ill-informed and widely chaotic. It’s by Marcano’s design that they work to make the film thrilling, engaging, and heartfelt all at once.

I have to mention the beauty of the scenery. The beaches and the island are quaint and peppered in poverty, though they’re far from slums. There’s a reverence for the earth and for the village as Osiris explains later when talking about their little village to Skimma. He maintains that the purpose of the island is for the community to take care of each other, and thus it. Skimma has some other thoughts, but you can tell he’s had this teaching rooted in him since he was a child. A large part of the film’s conflict comes from Skimma learning “there’s no place like home” but still trying to leave.

Chee$e is an interesting watch, and at nearly two hours it is a bit of an investment, but if Marcano is to be trusted (and I believe he is), then we can expect the end of the next two movies will be a Caribbean Saga that will be revered in the islands as The Godfather is revered in the US.