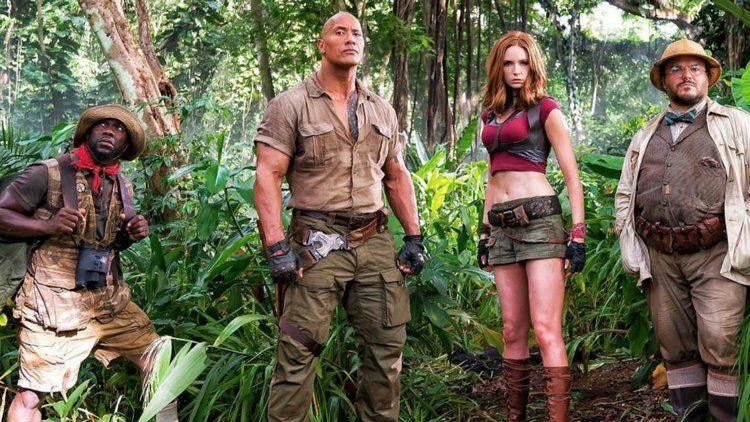 A funny thing happened when I clicked on the play button to watch the Jumanji trailer, I actually liked it! I knew the premise of the reboot (we’ll call it that) a while ago being knee deep in all things movie related. But I truly was not expecting this concept of resurrecting a beloved children’s film from 1995 starring the legendary Robin Williams into a modern tale with a different spin to be anything worth seeing, and now fast forward and ENTER The Rock who is considered one of the top action film stars of today. Also, inject Kevin Hart one of the best comedians around as well as Jack Black and Nebula herself Karen Gillan and you have yourself a decent film that can and may turn into a comedy/action film franchise in no time.

The concept of the first film was clever enough as two kids come across a magical board game and upon playing it release a man held captive in the game for decades (Robin Williams) and animals and all sorts of jungle creatures from the game are brought to life in the real world and you have a classic 90’s fun-filled mayhem film for kids that won’t be soon forgotten.

This time around things get more digital, in the trailer for Jumanji: Welcome to the Jungle features four protagonists who get sent to detention (punishment: cleaning the school basement) and while hurling innocent quirky remarks about each other, one of them come across an old video game system and as the gaming pro that I tell myself I am, it looks to be an Atari 2600 or perhaps a Colecovision? Yikes lol…hey, I didn’t hit my stride of gaming until NES in 1987. But as each of them gather around the old Sony Tube circa 1990 something, they each pick a character from the game and press play and then you have a quick Tron moment as they are all transported into the game. This is when my geek antennas started pointing due north. The next scene has them dropping down into a thick deep green jungle as they all have physically become their avatars.

The trailer speeds up with a series of great Indy style action sequences, a host of animals flying through the screen and of course the Rock showing us he can still do his eyebrow trick.

As well as Kevin Hart reminding us he is still the funniest man on earth. This film has promise for sure and the casting was brilliant. Seeing that the trailer was just released; I am sure many people will have that same serendipitous moment I had when I first saw the trailer which is pure excitement and joy. This reboot seems to be a legit one and as we have seen lately in the movie industry it’s not an easy task, but Jumanji: Welcome to the Jungle will no doubt be a surprise hit when it releases around the holidays this year December 20th.

Sneak Peek of ‘Jumanji: Welcome To The Jungle’